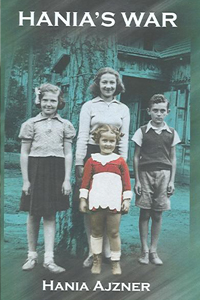 Austria: Ludwigsdorf, Mauthausen
Note: those cities/towns/camps underlined are those which are most central to the narrative

Hania Ajzner’s memoir begins in Warsaw, devoting 30 pages to life before the war. Eighty-seven pages deal with life in the Warsaw Ghetto; 72 with life in Warsaw on the Aryan side; 43 with life in Warsaw and France after the Russian liberation. Finally, an epilogue describes Ajzner’s life in Australia. Ajzner attempted this autobiography at several stages in her life, but finally completed it in her later years. It was published in 2000 by the Makor Jewish Community Library.

Ajzner, born in 1934, relates her vivid childhood memories of family and friends in Warsaw before the war. As she was only a young child, she mainly recalls her many pleasant holidays with her parents and extended family, and the great love she felt for her parents. Ajzner’s happy childhood ended on 1st September 1939, when she was woken by an air raid over Warsaw, which marked the beginning of her Holocaust.

In the autumn of 1940, the Germans finalised their plans for a ghetto in Warsaw. Due to the standing of Ajzner’s father, Jozef, who had many loyal contacts outside the ghetto, her family was able to move into a tannery complex in early 1941. Over the next year they remained relatively protected, as Jozef was essential to running the tannery, and had non-Jewish friends protecting him and storing gold and leather for him in safe places outside the ghetto. Ajzner spent most of 1942 hiding in a tiny cellar filled with 25 people, to avoid the German selections.

On 24 January 1943, just a few days after her father had failed to escape deportation to Majdanek, Ajzner escaped the Warsaw Ghetto with eight family members. During 1943 and most of 1944, Ajzner hid in several different convents in Warsaw, under the taking on the name of a Polish Christian, ‘Ania Zakoscielna’. On 13 August 1944, she lost contact with her mother due to the Warsaw Uprising. After enduring the difficulties of having two identities and the fear of being discovered to be a Jew, Ajzner spent the final months of the war in German camps, together with other Polish prisoners. Finally in early December 1944, she ended up in another convent in Czestochowa. There she stayed until 1st August 1945, when she was reunited with her mother.

The style of this book is unique. Her account of life before and after the war is written in the first person. However, the only way she could describe her experiences during the war itself, was in the third person. This deliberate shift in narrative style was Ajzner’s attempt to distance herself from the painful memories of the Holocaust. By extricating herself in this way, she was free to express herself in the form of a different persona. Consequently her writing is deeply emotive and intricately descriptive. Not only does she relate her own history, but she devotes much attention to the fate of her mother, father and her extended family. Her attention to detail is exceptional and her sensory recall of colours and smells is evocative. She presents numerous character sketches, from her brave father and mother, to the many gentiles who helped her survive and to the few who did not.