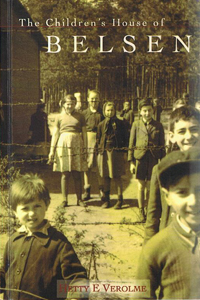 The Children’s House of Belsen is Hetty Verolme’s autobiographical account of her experiences during her imprisonment at the Bergen-Belsen Concentration camp from 1943 to liberation in 1945. This narrative is in three sections: approximately 40 pages deal with her family’s experiences in Nazi occupied Amsterdam and the lead up to their deportation to Belsen; over 200 pages are dedicated to life within Belsen; and 50 pages describe the liberation of the camp by the British Army, and the path back to Amsterdam. At the end of the book there are 15 pages of photographs of her immediate and extended family, various people she met during her time at Belsen, photographs taken by the British Army of the camp after liberation, and pictures of the 50 year reunion of the children from Belsen. There are also two transcripts of an audio interview between Verolme and Patrick Gordon-Walker of the BBC, translated from its original German, which was broadcast throughout Europe after liberation.

Hetty Verolme’s account of the time she spent at Belsen was written and published later in her life, at the age of 70. Born in Belgium in 1930, to a Jewish mother and atheist father, Verolme’s family moved to Amsterdam in 1931. Her father’s trade as a well-to-do textile merchant meant that Hetty and her two younger brothers lived in comfort. During the Nazi occupation of Amsterdam, the Verolme family were initially spared from deportation due to obtaining ‘work exemption’ documentation. However, they quickly began to realise that they would eventually have their lives shattered by the Germans, and on 29th September, 1943, her family was deported to Bergen-Belsen concentration camp. For just over a year the family was able to stay together until December 1944 when the Nazi’s relocated the men and women of the camp to other parts of Europe, leaving the children at barrack number 211, later to be known as the children’s house of Belsen.

Verolme, as one of the older children, quickly established herself as a surrogate mother to the captive children, putting the needs of the children before her own. She describes in beautiful detail her affection for the children, her love for Sister Luba (one of several minders of the children), and the way that she attempts to ease the discomfort of the children in their appalling environment. Verolme describes the piles of dead bodies visible from the windows of the children’s house, and the way all the children were starved and emaciated. She graphically recounts how the children ere all riddled with lice, and how most of them needed to have their bowels pushed back into their bodies after going to the toilet.

The Children’s House of Belsen is written in an accessible, yet powerful style and does not set out to shock the reader, as the tale itself is shocking enough. Verolme presents herself as a simple girl with simple morals and the courage to practise them. Verolme provides descriptions of the places and people she encounters during the Holocaust, from her surroundings at Belsen to the hospital the children are transferred to after liberation. The Children’s House of Belsen is first and foremost an account of survival and strength; of how even children can survive one of the worst atrocities the world has ever known.