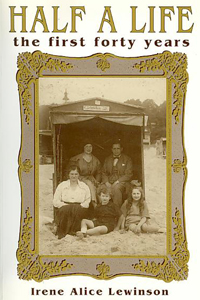 Lewinson’s autobiography presents an idyllic youth followed by a harrowing wartime experience. The first 75 pages describe her childhood and adolescence in Lodz. The following 75 pages deal with her university life in Vienna and her married life in Zurich and Wysoka. Pages 150-240 detail her incarceration in Soviet prisons in Wilejka and Yaya. Pages 241-320 deal with her life in Osh. The final 60 pages outline her travels across Europe, initially to find family and friends, before heading to her exit port and boat to Australia. The book was published in 1996 by Vista Publications in Melbourne. It was written late in life, in the authors words, “to quench a longing to put the account of a lifetime on paper.”

Alice Lewinson was born in Lodz in 1912. In 1914 her family left Lodz for Moscow, before returning in 1918 following her father’s release from prison. He had been arrested during the instability surrounding the 1917 revolution. Her father was a successful textile factory owner and the family enjoyed a comfortable upper class lifestyle. Lewinson fondly recalls numerous summer holidays spent abroad, sometimes at fashionable seaside resorts. She received a solid formal education and shares with the reader her love of literature, language and sport. Following her matriculation in 1930 her family moved to Zagreb. Meanwhile, Lewinson went to university in Vienna, where she subsequently became engaged in 1934. She was married in 1935 in Zagreb before moving to Zurich, where her husband, Rysiek was studying. They later moved to Warsaw in 1937.

After the German invasion, Alice and Rysiek decided to flee war-torn Poland. Attempting to cross the Russian border, they were thwarted numerous times. Finally, in late 1939, they were arrested by Russian soldiers and separated. Lewinson was imprisoned in Wilejka where she shared a cramped cell with other women. She describes the fetid conditions in vivid detail and recalls the constant interrogations by the Russian authorities. She would not see Rysiek again for seven years.

Some time in late 1940, Lewinson was sentenced to three years’ labour in a camp located in Yaya in Siberia. She worked sixteen hours a day stitching military jackets for the Russian war effort. In the labour camp, Lewinson formed important friendships with women in a similar predicament to her own. Throughout her incarceration she suffered intensely from the harsh sub-zero Russian winters as well as major asthma attacks. Under an amnesty granted in 1941, Lewinson was given the freedom to leave the labour camp and to venture out into the unforgiving terrain of Central Asia.

From late 1941 until early 1942, Alice was wandered through Central Asia in a constant search for food and shelter. In early 1942 Alice managed to find a job in an Uzbek town called Osh. She became a Russian citizen by the end of 1942. In the spring of 1944 she moved in with Adam Lewinson whilst working as an accountant. In October 1945 Adam and Alice were married and both desperately wanted to leave communist Soviet Union and find their missing relatives in Poland. Adam and Alice left the Soviet Union and boarded a train headed for Poland in March 1946. A few weeks later they arrived in Adam’s hometown of Lublin.

The final part of Lewinson’s memoir deals with her desperate attempts to leave communist Poland in search of a better life. Eventually in early 1948, Adam and Alice boarded an Egyptian ship bound for Melbourne.

Lewinson’s book is highly descriptive, and her memory of many events is impeccable. Her vivid language brings the reader into the nightmarish world of her frozen prison cell. The narrative is interspersed occasionally with the author’s thoughts at the time of writing. The book also contains maps, documents and colour photographs.