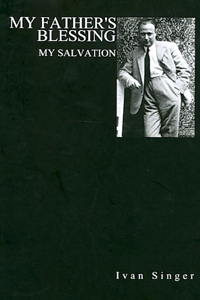 My Father's Blessing: My Salvation is the rich account of Ivan Singer's wartime experiences. After a brief prologue and a historical chronology of wartime events, pages 17-78 depict the bombing of Belgrade and Sarajevo, as well us life under German occupation in Vrsac. Pages 79-126 tell of Ivan's time in Belgrade, including the Topovske-Shupe prison. Pages 127-191 describe Ivan's escape to Split, his work there and subsequent imprisonment. Pages 195-267 tell of his incarceration in Scipione and Ferramonti, as well as his time working for the Allies in Italy. Pages 271-337 portray Ivan�s time as a soldier in Yugoslavia, including the famous attack on Drvar. Pages 338-409 tell of Ivan's journey to Russia and his time in flight school. Pages 413-459 are an extensive epilogue containing reflections on justice and his memories of family members and people from his home town. Ivan wrote the book in his seventies and published it privately in 2002.

Ivan Singer was born in the town of Vrsac, Yugoslavia, in 1922. He was raised in a middle-class household in what was a multicultural town of Serbs, Choglers, Hungarians, Romanians, Gypsies and Jews. Despite discriminatory entry policies, Ivan managed to get accepted to study medicine at a university in Belgrade. As the Nazis invaded in April 1941, Ivan was in Belgrade and witnessed the destruction caused by German bombers and the ensuing fires. Ivan and his friend, Paja, then went to Sarajevo in the hope of joining the army, only to be told that the army was not yet mobilised and was in a state of collapse. When it was Sarajevo's turn to endure German bombing, Ivan luckily survived the dropping of a 50kg bomb which fell just metres from him. Following Yugoslavia's unconditional surrender, travel became perilous and Ivan decided to return home to Vrsac.

In German occupied Vrsac, Jews were forced to perform degrading labour and were frequently beaten. Despite the threat of death as a punishment, Ivan often listened to BBC radio on a secret radio set. In July 1941 Ivan returned from work to find his home sealed and the entire Jewish community assembled at the town hall. They were then transported to Belgrade where they were billeted with the local Jewish population. Ivan was taken to the prison camp of Topovske-Shupe. In September 1941 Ivan witnessed a selection where 100 men were taken away. The next day he read in a newspaper that 100 Jews and Communists had been executed in retaliation for the death of a German soldier. Amazingly, many inmates refused to see a connection between the events. Under the pretence that he was ill, Ivan got himself transferred back to Belgrade where he stayed with a wealthy Jewish family. Ivan was eager to escape but his family was reluctant to do anything against the regulations, until it was too late. While in Topovske-Shupe Ivan's father arranged for the last of his money to be used to get his son to safety. Using the money, Ivan was able to escape to territory occupied by the Italians, who were friendlier to Jews. Ivan reached the city of Split, which was under Italian occupation, in December 1941. In Split Ivan stayed with friends, and after obtaining the appropriate documents, began to earn a living.

In June 1942 Ivan and Paja were imprisoned for having false papers. After a few days in prison Ivan contracted Typhoid fever and was hospitalised. The prisoners operated a de facto communist society within the prison, where all food parcels were pooled and shared, along with frequent lectures on communist philosophy. In December 1942 Ivan was transferred to a concentration camp in Scipione, Italy. In Scipione Ivan rose to a position of leadership amongst the prisoners, who were not afraid to stand up for their rights under humanitarian conventions. In July 1943 Ivan was moved to a camp in Ferramonti, in the south of Italy. In September the inmates discovered that the guards had abandoned the camp. Ivan was part of a group of communist partisans who then set out to join Tito's Liberation Army. Members of the group were offered jobs as part of the Special Balkan Service (SBS), a unit in the US army sent to reconnoitre in Yugoslavia. Ivan was reluctant to accept a salary, as it went against the creed of the Yugoslav Partisan Army, but was relieved to discover that his fellow communists had also sold out.

Soon after parachuting into Yugoslavia in 1944, Ivan was taken to Drvar, the site of Tito's headquarters. Ivan performed a number of duties for the SBS, but as an idealist, wanted to leave the US forces and join the local Partisan Liberation Army. In May 1944, after assuming that the major threat of attack had past, Ivan awoke to a massive German airborne attack on Drvar. Ivan was in a group of soldiers who managed to escape with Tito. They then marched day after day with little food or water. Ivan was so exhausted that he once fell asleep in the middle of a battle. Eventually the group reached safety whereupon Ivan took up an invitation to become a pilot in the new Yugoslavian Air Force. With war still raging, he was sent to Krasnodar, in Russia, to train in a pilot school. During the years of his training as a pilot, the war ended. Upon completion, Ivan returned home to Yugoslavia to begin his service.

My Father's Blessing: My Salvation is a rich narrative of adventure and survival. It traces Ivan's passage between different occupiers and rulers, as well as the evolution of his political ideology. People, places, and events are recalled with vivid detail. The book also contains over 100 footnotes, which are not references but rather explanations of local foods, words, customs and places mentioned in the text.