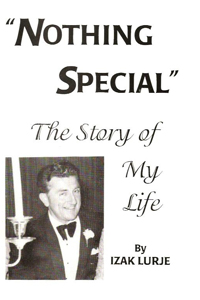 Nothing Special is the life story of Izak Lurje. Pages 1-39 deal with his family background and his childhood in Rovno and other towns. Pages 40-89 tell of his life as a refugee in various parts of the Soviet Union, while pages 90-226 describe his new life in Australia. Izak began writing his memoirs at age 71 – in his words, “not because I have achieved anything remarkable but because I have lived through some of the most exciting years of our times.”

Izak Lurje was born in Grodno, Poland in 1923 into an educated but irreligious family. Izak’s family frequently moved between cities but he spent most of his childhood in Rovno. Soon after the beginning of World War II, Rovno came under Soviet occupation as part of the Russian-German agreement dividing Poland between the powers. Izak’s school adopted Russian as the language of tuition as well as Soviet style rote learning and ideology. Commodities were in short supply and Izak was forced to wait in bread queues, In June 1941 Germany attacked the Soviet Union. Izak’s family decided that the older generation would stay put while the children would flee East. Izak bade farewell to his parents and would never see them again.

After cycling for days Izak boarded a train bound for Kurgan in Siberia. After enduring the freezing temperatures of Siberia, Izak moved south to Samarkand in Uzbekistan. Izak struggled to get by holding down odd jobs in Samarkand and Zyrabulak. One day in March 1944, in an attempt to supplement his meager earnings, Izak stole some coal and sold it. He was caught in the act, arrested, tried and sentenced to two years in a forced labour camp. Izak served time as a prisoner in Samarkand and Makhachkala. Over time, owing to the inadequate supply of food, Izak became skinny and weak.

After the end of the war Izak was released in a prisoner amnesty. He then returned to his home town of Rovno, eventually becoming a fur and skins dealer. After political unrest in Central Europe and rising tensions between the Jewish community and the Soviet government, Izak decided to leave for the West. He arrived in Australia in 1957 to begin a new life in a free country.

Nothing Special is written in casual English, telling Izak’s story with modesty and candour. Despite the passing of the years, Izak recounts characters and incidents from his Polish childhood with great detail.