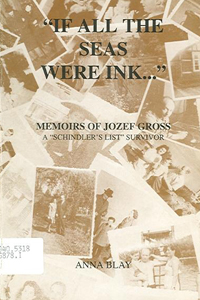 Title: If all the seas were ink
Author: Jozef Gross
Publisher: After Hours Computer Services
Place of publication: Melbourne
Year of Publication: 1993
Location of Book: Sir Louis Matheson Library, Monash University Clayton Campus
Cities/town/camps: Poland: Krakow, Wieliczka, Plaszow, Czechoslovakia: Brinnilitz
Note: those cities/towns/camps underlined are those which are most central to the narrative

“If All The Seas Were Ink” is the story of Jozef Gross’s life from 1904 to 1949, as told to his niece, Anna Blay. Pages 3-38 tell of his time in Krakow and Wieliczka, both preceding and during the German occupation. Pages 39-53 describe Jozef’s time in the Plaszow concentration camp and Schindler’s work camp in Brinnlitz. Jozef’s testimony was recorded at the behest of his niece, Anna, and was published in book form in 1993.

Jozef Gross was born in Krakow, Poland, in 1904. The fifth of eight children in a religious family, Jozef soon learnt that anti-Semitism was a part of everyday life. He got his first taste of war when in 1914 his school was requisitioned as a military hospital. After joining Poale Zion, a Socialist Zionist youth movement, in 1918, Jozef abandoned religion and became a communist. Jozef found work as a goldsmith and quickly advanced in the field. He married his first wife in 1934 and at the outbreak of war already had a two year old son.

When the Germans invaded in September 1939, life became chaotic for Cracow’s Jews. Both Jozef and his wife were temporarily taken away by the Germans to be slave labourers. Restrictions on Jews increased until Jews required permission to live in their own city. Jozef was forced to move with his family to Wieliczka but continued to work in Krakow. When the order came to clear Wieliczka, Jozef and his family returned to Krakow, where the Jews had already been confined to a ghetto. Jozef’s wife was betrayed by Poles and was never seen again. Jozef worked as a blacksmith in a German factory and his work permit was supposed to ensure his son’s safety. In October 1942, however, his son was taken away in a transport. Jozef eventually found work in a military airport where conditions were not as harsh. To reduce the brutality of the German officials, inmates placated them with frequent bribes.

In 1943 the SS evacuated all the Jews from the airport to the Plaszow concentration camp. In Plaszow prisoners endured backbreaking labour, continual beatings and constant hunger. In May 1944 a selection was made and many prisoners, including Jozef’s brother, were taken to Auschwitz. Jozef worked as a metallurgist but was able to obtain extra privileges by making jewellery on the side. One day he was chosen to join a transport to a factory run by Oscar Schindler. Jozef quickly raised his economic status in the camp by secretly making trinkets to trade on the black market. Josef remained in Schindler’s camp until his liberation by the Russians. After the war Josef returned to Krakow and the jewellery trade. He married a fellow camp inmate and in 1949 began a new life in Australia.

A macabre dichotomy underscores Jozef’s account: the permanence of the value of gold on one hand, the fleeting value of Jewish life on the other. Through his trade Jozef is able to stay one step ahead of the spectre of death that surrounds him. Jozef does not seek sympathy by dwelling on his negative experiences and his losses, nor does he avoid them. “If All the Seas Were Ink” is an engaging story of survival amidst tragedy.