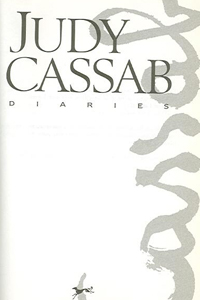 Judy Cassab Diaries is a book of her diary entries from 1944 to 1993. The first ten pages describe Judy’s survival in Nazi occupied Budapest, while the remainder of the book (500 pages) tells of her new life in Australia and her development into one of Australia’s most successful female artists. Having written a dairy since the age of twelve, Judy’s entries from before April 1944 were lost during the war. The existing 1944-1993 entries were published by Random House in 1995.

Judy Cassab was born in Vienna in 1920. She was married in 1939 to Jancsi, who in 1941 was sent to a Russian forced labour camp for three years. After Jancsi was taken away, Judy went to study Art in Budapest. The diary begins in April 1944; Hungarian Jews have been forced to declare their assets and wear a yellow star. Having heard eyewitness reports of Jews being herded into cattle trains, Jansci suggests that they separate for safety reasons. Judy removes her yellow star, and, using the identification papers of her old maid, adopts a new non-Jewish identity. She moves into a room advertised in the paper.

As the war’s end drew nearer, bombing raids increased and Judy spent more time in bomb shelters. Fearing what would happen if her journal was found, Judy began writing on toilet paper and stopped recording dates. By this time Judy was duplicating documents and smuggling medicine for the underground resistance movement. As the bombing intensified in 1945, Judy spent even longer periods in the cramped confines of her bunker. She describes chaotic scenes of bombers reducing the buildings in her street to rubble and of the city going up in flames. Human and animal carcasses lay on the street, while lulls in the bombing were accompanied by looters raiding shops. Even after Russian forces liberated the city and Judy was reunited with Jancsi, hunger and hardship persisted.

After the war’s end, Judy became heavily involved in the art industry and began exhibiting her paintings. Her and her husband wandered between cities across Europe in search of a new home. Finally, they received permits to enter Australia and immigrated there in 1951. In her new homeland she became one of Australia’s most successful female artists, painting portraits of royalty and twice winning the Archibald prize, in 1961 and 1968. In 1988 she was awarded an Order of Australia (AO) for her services to art.

Cassab’s diary entries are short, sharp and personal. It is indeed unfortunate that most of Cassab’s wartime diaries were lost. The reader is left with only a brief sketch of the chaos of German occupied Hungary, followed by an extensive record of the rise and rise of Cassab’s artistic career.