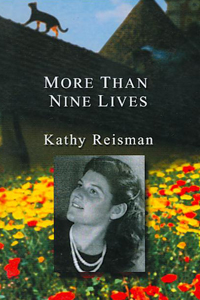 Kathy Reisman’s 93 page autobiography deals with the pre-war years in her native Budapest, her survival during World War Two and her post- war life in Israel and Australia. The narrative is chronological; the first 22 pages detail her childhood in Hungary with descriptions of her family life; approximately 30 pages follows her experiences and survival through the Holocaust; 25 pages are devoted to Reisman’s journey to Palestine and her life there, with the remaining 16 pages describing her immigration to Australia in 1960 and her life here until the present day. Several pages are dedicated to photos of her family members. Reisman’s story was produced late in life and published by the Makor Jewish Community Library in 2002.

Kathy Reisman was born Kathy Rosenberg in 1927 in Budapest, Hungary to parents Moricz and Elizabeth. The first of three daughters, she devotes the first two chapters of her story to early childhood adventures, descriptions of family life and the special bond she shared with her father. She recalls that from an early age her father instilled in her a need to be strong and independent and attributes this strength to her survival through all life’s adversities. In 1939, Reisman’s father was conscripted into the Hungarian army as part of the Jewish Brigade, initially sent to the front and later to Siberia where he remained until 1944. Reisman and her remaining family survived by their wits and through the selling of food and market items. In May 1944, the war reached Hungary with Reisman, her mother and two sisters arrested by the Hungarian police. They were loaded onto a train with hundreds of others and sent to Auschwitz. Upon arrival, the ‘selection’ took place. Reisman was selected for work whilst her mother and two sisters were chosen for extermination. After three weeks, Reisman was herself selected for the gas chambers but was saved by a Polish Jewish guard who assisted her by pushing her onto a work transport with thirty other women. She refers to this man as her ‘guardian angel’. This transport was taken to Frankfurt-Am –Main to work at a German airport, camouflaging aeroplanes. Reisman remained there until she was taken ill with Scarlet Fever. She was taken by German guards to a Red Cross hospital near Dresden, where she remained until the end of the war. Following liberation, Reisman began her journey back to Budapest in search of her family. Believing that she was the sole survivor of her family, Reisman fulfilled her promise to her father to settle in Palestine. She lived there, married Imre and had two children before deciding to emigrate to Australia in 1960. Her uncle, Willie Gutman, who had emigrated to Australia , sponsored her immigration.

More Than Nine Lives is written in a direct, simple manner. Due to Reisman’s limited command of English, her story was first expressed through a series of taped interviews. These were later transcribed and rewritten by Makor editor Adele Hulse, who endeavoured to retain a sense of Reisman’s own voice through the narrative. This could explain the stilted nature of the language used to express the extraordinary series of events that depict Kathy Reisman’s defiant spirit and courageous life.