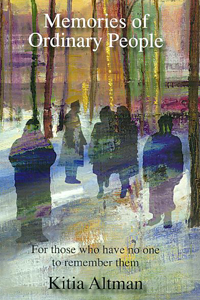 Kitia Altman’s book, Memories of Ordinary People, paints a comprehensive picture of the life of a Polish Holocaust survivor and the people that shaped her experiences. The first 200 pages detail the people, places, and experiences of Kitia’s life in Bedzin before the war. Pages 202-263 portray life in the Bedzin ghetto, while pages 264-291 are Altman’s testimony to honour a man who helped Jews during the war as ‘Righteous Among the Nations.’ Pages 295-364 depict the horrors of the Annaberg, Auschwitz, Ravensbruck and Beendorf camps. Pages 377-443 are, in Altman’s words, ‘wistful reflections’ on diverse topics related to the impact of the Holocaust on her life after liberation, including a debate with Holocaust denier David Irving. Kitia began writing when she joined the Jewish Holocaust Museum and Research Centre in 1988. With the assistance of a program designed to enable older people write their memoirs, Kitia’s book was published by Makor Library in 2003.

Kitia (Henrietta) Altman was born in Bedzin, a small town in eastern Poland. Her family enjoyed a comfortable, middle-class life in a block of apartments owned by her grandmother. Kitia received a solid education at Furtenburg’s Gymanasium, where she matriculated in 1939. Her plans for further study in France were thwarted by the outbreak of war and subsequent German occupation of Bedzin. Kitia began teaching Jewish children who had been denied education under the new Nazi regime. Kitia then secured employment in ‘the Shop,’ a factory manufacturing winter uniforms for the German army. The Director of the Shop, a German, did everything he could to help his Jewish workers. For a time, he was able to issue them with a Sonderkarte, a document exempting the worker and two dependents from deportation. He was later honoured as ‘Righteous Among the Nations’ by Yad Vashem. In the Shop, Kitia was befriended by a Polish Christian who offered to save her from the events that were to follow. Instead, Kitia persuaded her to hide Kitia’s young cousin in her place. The Pole was also honoured as ‘Righteous Among the Nations’ for her act of protection.

In August 1943, orders were issued to cleanse the ghetto of Jews. Kitia’s parents were sent to Annaberg labour camp, while Kitia remained in Bedzin as part of a small group known as the ‘last Jews in Eastern Upper Silesia,’ left to wind up the Shop. In June 1944, after the Allied invasion of France, this group was also transported to Annaberg. In July, Kitia was relocated to Auschwitz. After the Auschwitz uprising in October 1944, Kitia was transported to Ravensbruck, and then Beendorf, where she was put to work in a Siemens munitions factory producing Hitler’s secret V-2 rockets. She was eventually liberated by the International Red Cross in April 1945. Kitia was taken to Malmo in Sweden before moving to Paris and marrying. In 1947 her and her husband emigrated to Australia.

The subheading of Altman’s book, Memories of Ordinary People, reads, “For those who have no one left to remember them.” Indeed, many chapters in the book are devoted to the people who shaped Altman’s life, be they family, friends, boyfriends, workmates or teachers. Occasionally Altman expresses her feelings directly, in the form of a letter to the person. Memories of Ordinary People is marked by its depth and attention to detail, and is a fitting testimony to a young woman’s strength and determination.