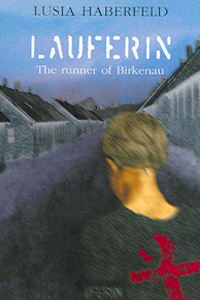 Lusia Haberfeld’s book focuses on her experiences during the war years, with chapters also devoted to memories from before the war and life in its aftermath. Written late in life, the memoir is 102 pages long. Pages 1-14 describe life in Lodz before the war. Pages 15-34 cover the period from Haberfeld’s family’s ‘escape’ to Warsaw at the beginning of the war until their separation and deportation to Majdanek. Pages 35-64 cover Haberfeld’s experiences in Nazi Concentration camps. Pages 65-102 describe liberation and life after the war.

Born in Lodz, Poland, Lusia Haberfeld was only eight years old when the war began. With the German invasion of Poland, her father was briefly called up to the Polish army, but within days he returned home as Polish resistance collapsed. The Germans marched into Lodz, burning to the ground many Jewish buildings including Haberfeld’s school and synagogue. Anti-Jewish measures were instituted, including a prohibition on walking in particular streets, one of which was the street in which Haberfeld lived. Her family’s shop was confiscated, and her father’s old friend and business partner joined the Nazi party and betrayed him. Haberfeld’s family then decided to escape to Warsaw, in the hope of getting to Russia. Her father went first, and then restrictions were placed on Jewish travel. Haberfeld, her younger brother and her mother managed to get out on the last bus to take Jews from Lodz when her mother threatened an ex-customer, who was also a transport official, that she would jump out of a window with her two young children if he did not allow them to leave. He relented and found them room on a bus.

In Warsaw, Haberfeld’s family moved in with relatives who lived there; soon they were all made to relocate to the Jewish ghetto. Haberfeld mentions a teacher of hers from Lodz, Panna Viera, who also moved to Warsaw, and the wonderful classes that she would organise for the young girls. Soon the first selections and deportations began, and population of the Warsaw Ghetto started to shrink. Realising that the deportations meant death and that their own deportation was probably soon coming, Haberfeld’s father and a group of others built a bunker outside of the ghetto. The time was April 1943 and they planned to stay in the ghetto to celebrate Passover with other Jews, and then relocate outside. Unfortunately for them, the final liquidation of the ghetto was scheduled for those very days. The attempted deportation, and the Warsaw Ghetto Uprising which took place, prevented them from their planned escape, though the uprising inspired Haberfeld and those in hiding with her. When the Germans began to burn down the entire ghetto, the Haberfelds had nowhere to go, and were ultimately captured.

Haberfeld and her mother were at this point separated from her brother and father—she would never see them again. She and her mother were taken to Majdanek, to work. Haberfeld, though only eleven years old, managed by lying, pretending to be older, and through the benevolence of several strangers along the way, to join the group selected for labour. She and her mother spent three months in Majdanek, until they were taken to Auschwitz-Birkenau in July 1943. With the help of a Jewish doctor in that camp, Chaim Kaminski, Haberfeld found work as a lauferin (messenger girl) for a woman whom she called Schmitka, a Kapo. This job allowed her to smuggle clothes into the camp which could then be exchanged for extra food, thus allowing her and her mother to survive in Auschwitz for 18 months, a very long time, especially for a child.

As the Russians approached Auschwitz, the camp was evacuated and Haberfeld and her mother were taken on a ‘death march’ that ultimately saw them on a train to Bergen-Belsen. There, Haberfeld once again found the woman who had employed her, Schmitka, and again worked as a messenger girl. She lasted as such for three months, until 15 April, 1945, when Bergen-Belsen was finally liberated by the British. After liberation, Haberfeld lived at the camp for some months before relocating to Switzerland, and then to Australia. She had wanted to go to Palestine, inspired, amongst other things, by a visit to Bergen-Belsen by David Ben-Gurion. Her mother, however, did not want to go and she could not separate herself from her only remaining family member.

Detailed and personal, factual yet tender, Lauferin tells the story of a young girl forced to grow up under the most horrific of conditions. Haberfeld manages to convey many of her feelings about the people who helped her, her family and friends, in a manner that both preserves the naivety of the young child who experienced the events, and reflects upon the experiences of that child with half a century of hindsight. Compelling and at times heart-wrenching, Lauferin is an important testimony to the experiences of a child survivor of the Holocaust.