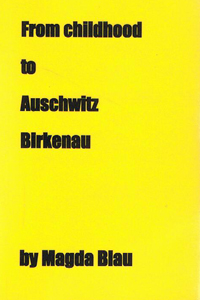 Magda Blau’s self-published book tells the story of her life from childhood until shortly after the end of World War II. 100 pages in length, the book begins with a short introduction and a letter from Steven Spielberg thanking Magda for her contribution to his collection of video testimonies. Pages 1-15 tell of Magda’s life before the war in a town in Slovakia. The bulk of the book – pages 16-85 – describe her time in Auschwitz-Birkenau. In the final pages (86-100), Magda tells of the ‘Death March’ that took her out of Auschwitz, her subsequent liberation, and her return to her hometown in Slovakia. In her introduction, Magda outlines some of the most brutal moments in her years in the camps, and states her motivation for writing about her experiences—to combat the phenomenon of Holocaust denial: “I have often wished for the chance to ask some of these academics why they want to deny my suffering and discredit my life? Did we not suffer enough, that we should have to listen now to such deniers?”

Magda Blau was born in 1916 in Michalovce, a town in what would soon be Czechoslovakia. She encountered anti-Semitism from her early childhood, although at that stage it was not all-pervading. A talented youth, Magda did well at school and was very involved in the Jewish Scouting movement and in Zionist organisations in her community, taking on considerable responsibility. On completing school, she studied to be a kindergarten teacher, completing a four-year course in two years. She returned to her community where she started a kindergarten which was immediately successful.

Soon, anti-Jewish measures were introduced in Slovakia – Jewish businesses were confiscated, doctors and lawyers banned from practicing. In telling her story, Magda jumps almost directly from life in Michalovce to Auschwitz. At some point (she does not say when, but likely some time in 1941), girls in Magda’s town were rounded up by Czech gendarmes and put on trains. Unlike in many other places, they were given an opportunity to say goodbye to loved ones after having been rounded up. They were then put on cattle trains and transported to Auschwitz.

Magda’s experiences in Auschwitz were very different from those of many others. Due to her experience as a kindergarten teacher, her organisational skills and her ‘chutzpah’, she found herself in various positions of responsibility. This continued when she was moved, in August 1942, to Birkenau. Her roles were many and varied – at one point she was responsible for the residents of a Russian town taken prisoners, at another she was responsible for 30,000 girls. She was put to work for a time in Block 10, a ‘hospital’ where doctors performed cruel experiments on innocent victims. In her various roles, she was able to save many people – some temporarily, some who would live to see the end of the war. She encountered many close calls, such as the time she left the camp ‘hospital’, though she was still sick – unbeknownst to her at the time, the sick people were to be sent to the gas chambers the following day. She also made many friends and encountered many extraordinary people, such as the doctors who refused to perform the cruel operations demanded by the Germans - Ssme of these doctors paid for their courage with their lives. It was also in Birkenau that Magda met her husband-to-be, Bela.

In January of 1945, as the Russian army approached, Magda and the other inmates were evacuated from Auschwitz and taken on a ‘Death March’. The march took them to Ravensbruck and then to Malchov. It was there that Magda experienced liberation. In the wake of the war, she returned to her hometown, Michalovce, where she was reunited with some of her family and friends, and married Bela.

‘From Childhood to Auschwitz-Birkenau’ is not the work of a professional writer. Rather, it is the work of a woman who is writing because she has a story that she needs to tell. In its own way, the candid ‘personalness’ of the story is one of the factors that makes the book so powerful – one feels like the author is ‘talking’ to the audience, and that she has a powerful urge to pass on the story of her awful experiences.