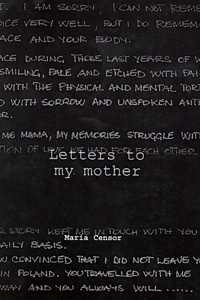 Maria Censor presents an account of her experiences during, and preceding, the holocaust. The book takes the form of letters to her ailing mother, who perished during the war. The letters display a certain literary freedom, indeed, the initial letter concerns the birth and life of her mother before Maria was even born. The first 36 pages focus on her family and its development from 1888 to the dawn of WWII, predominantly in Warsaw (Warszawa) with some time in Skolimow. Pages 38-58 discuss the German bombardment and occupation of Warsaw, her years pretending to be a Christian and the arrest and execution of her father. Pages 58-100 describe life in Radosc and subsequently in Skolimow as a weapons courier. Pages 101-114 describe her life in Gdansk after the Russian conquest, followed by her exodus to Australia. Letters to My Mother was published in 2000 by the Makor Jewish Community Library in Melbourne, as part of the “Write Your Story” Collection. It was written late in life, incorporating a manuscript written twenty years earlier.

Maria Censor was born Warsaw in 1925. Her parents ran a successful fashion store and the family was quite prosperous, enjoying holidays in Skolimow. The business suffered during the depression and the family was forced to adopt a less lavish lifestyle. When Maria was a child her mother became extremely ill with meningitis, followed by crippling osteoarthritis. Maria herself narrowly survived a bout of typhoid. Holidaying in Skolimow at the outbreak of war, the family returned to Warsaw. Life became difficult under German occupation and she, like all Jews, was forced to wear a yellow star. Her father had been thrown into prison for refusing to clear rubble for the gendarmes. He was later executed. Her family’s apartment was ransacked by the SS. All the while much of Maria’s time was dedicated to helping her sick mother.

In 1940, when the ghetto wall was being built, Maria took on a false identity, becoming the adopted daughter of a Catholic family living in her building. False documents were also obtained for her mother. They both were forced to be christened and Maria lived a Christian, churchgoing life for some time. While most of her family was moved to the ghetto, Maria was able to study at a kindergarten teachers’ college for almost a year. It was here that she met Tania, a friend that would later save her.

In 1941 Maria and her mother left for Milanowek, where she first experienced poverty and hunger. After returning to Warsaw for some time she took a job at a children’s home in Radosc. In 1943 she was arrested, her cover blown, but managed to bribe her way to freedom. She found safety with Tania, and began work as a weapons courier for the Polish underground. Maria and Tania then move to Skolimow. Following the German retreat in 1945 she left to seek out her mother in Milanowek, only to find out that she had been killed by a Ukrainian patrol. Maria worked for some time in Gdansk before being able to leave for a new life in Australia.

Casual yet eloquent, ‘Letters to My Mother’ moves along at a rapid pace. Short, sharp paragraphs swiftly intersperse historical events, memories and feelings, as well as reflections looking back on a period of innocence lost.. Intensely personal, the text is constantly peppered with the pronouns “I” and “you” and portrays Maria’s longing for her mother. The book also includes black and white historical family photos.