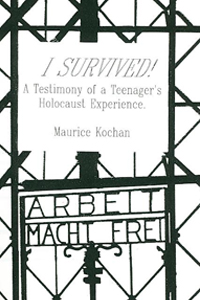 Maurice Kochan's 65 page testimony was written in 1991, primarily for his children and grandchildren. Kochan was encouraged to write his memoir and assisted in editing it by members of his family. The book tells of his experiences during the war and in its aftermath. The first 16 pages tell of the beginning of the war, and of the period that Kochan spent in hiding. Pages 17-56 describe Kochan's experiences in various Nazi camps. Finally, pages 57-65 tell of liberation, and of Kochan's attempt to build a new life after the war. The book is interspersed with photographs of Kochan and family members.

Born in the late 1920's, Kochan spent his childhood in Wadowice, southern Poland. His parents were religiously observant but they spoke Polish and were integrated into the wider society. In September 1939, when Wadowice was bombed by the Germans, Kochan's parents' restaurant was destroyed. They decided that day to flee to Dzialoszyce, his parents' hometown, which was smaller and more isolated than Wadowice. Kochan recalls his mother asking her rabbi if they could flee Wadowice by car that day, even though it was the Jewish Sabbath. He responded that if he could go too, he would.

Soon after arrival in Dzialoszyce, conditions there worsened for Jews. Whilst still in Dzialoszyce, Kochan and his family learned that transports were taking people to their deaths. Kochan and his siblings went into hiding with the Novak family, Poles from Dzialoszyce whom their parents had known before the war. Whilst in hiding their parents and sister were killed. The Novaks, as they became aware of the risks involved in harbouring Jews, pressured them to leave. By paying them with their money and possessions, the Kochan siblings were able to extend their stay until Germans began doing searches of houses in the area and they finally were forced to leave.

Kochan left for Krakow, but he was unable to find work or accommodation there. Realising that it was not safe for him to roam the streets on his own, he bribed his way into a local concentration camp, Ulag 1, because it was the safest place for a Jew to be. Kochan spent about a year in that camp, beginning October 1942. Whilst there, he lost his brother Mietek when the Germans killed everyone in the camp hospital. From there, Kochan was transferred briefly to Plaszow and then to Skarzysko, a labour camp.

Kochan describes an attempted mass-escape that took place around mid-1944. After hearing rumours that the Polish underground would assist them should they succeed in fleeing the camp, a large group of Jews bribed a German officer to cut the fence and made their way into the forest. They soon discovered that the Polish AK had ambushed them in order to steal the money that they knew would be smuggled from the camp. The escapees returned to the camp; the Germans, in response, removed all guards from the camp, knowing that Jews would not dare to leave again for the forests, where they would undoubtedly be killed by Poles.

From Skarzysko, Kochan was taken to Piotrkov, where for a short period he enjoyed slightly better living conditions and easier work. He was then moved to Czestochowannka, where he worked at a train station. As the Russians approached the area in early 1945 (the inmates had already heard about the liberation of Warsaw), Kochan was transferred to Buchenwald. There, he was selected for work at the Flossenburg labour camp. Flossenburg, in turn, was soon evacuated and Kochan was then taken to Mauthausen death camp, where he was liberated on 5 May, 1945. After liberation, Kochan emigrated to Palestine for a year before returning to Poland to be reunited with sister and brother. All of them soon left Poland for Australia.

Frank and honest, I Survived is written with the urgency of a survivor who wants to make sure that his descendants will be able to know his story. Kochan's style is personal, though unemotional. He reflects upon his emotional reactions, but the book itself does not read like an emotional response; rather, his main aim seems to be to recall events in as much detail as possible. This personal testimony, written primarily for an audience that is close to the author, provides important insight into the experiences of an adolescent Polish Jew during the dark years of the Holocaust.