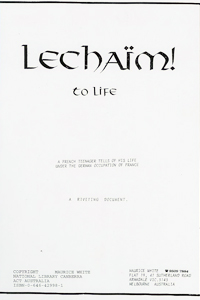 Lechaim! To Life is the story of a French teenager’s survival in World War II.
The first 16 pages outline the time Maurice White’s family spent in Paris and Marseilles. Pages 17-43 tell of Maurice’s experiences hiding out in Nice, while pages 44-73 tell of the rebuilding of his life in Paris after liberation, and his subsequent exodus to Australia.

Maurice White was born into a comfortable Jewish family in Paris, France. When the Germans invaded France in May 1940, Maurice and his family, like countless other Parisians, headed south. Maurice describes the scenes of destruction as the refugees on the road were frequently attacked by German or Italian planes. Maurice’s family then decided to return to German-occupied Paris. Over time, anti-Jewish measures increased and Jews were forced to wear a yellow star. Maurice, whose rebellious teenage personality comes out in the book, claims of the Jewish star, “I would never wear that shit on me!”

Maurice and his father decided to escape to southern, non-occupied France. They managed to reach Marseilles, where Maurice was joined by his mother and sister two months later. As the pressure of war grew, Maurice’s father started to lose his mind. He stopped eating and suggested that they should all commit suicide, an unnerving experience for the family. Maurice’s father was subsequently taken away, temporarily, to a psychiatric hospital. As fear began to dominate their lives, the family moved to Nice, which was occupied by the more Jew-friendly Italians at the time. Maurice had false identity papers and in Nice was able to work washing cars and teaching women to ride bicycles. One day Maurice returned home to find that both his father and the family’s identity cards were missing. They immediately moved to a new, rat-infested hideout. Maurice felt he had little reason to live except for his hatred and desire for revenge against the French Gendarmes. Another day he returned home to find his mother and sister had disappeared. Angry and confused, Maurice did not fear death or capture. They would provide macabre relief from his life as a fugitive. Maurice sought refuge at the home of a distant acquaintance who had once offered to help him should he ever be in need. During his time in hiding Maurice had many discussions on existential issues such as religion, morality and love.

After leaving the house for the first time in four months, Maurice was arrested by the police and placed in a cell, alone with “a Jewish blowfly also brought in for questioning.” As they did not know he was Jewish, Maurice received only a week’s hard labour under reasonably friendly German guards. Through a connection at the work site, Maurice managed to get a job driving trucks for a construction company. As construction had been halted by the war, the truck was instead used to transport food in from the countryside – a job that provided access to much-needed nourishment during wartime. As the tide of war turned, aerial bombing became more frequent and destructive. Finally in August 1944 Nice was liberated by American troops.

After liberation Maurice returned to Paris, reclaimed his family businesses through court proceedings, and reclaimed through his fists the furniture stolen from his house. His businesses prospered, yet Maurice felt empty in the absence of his family. Not wanting to stay in the country that had sold out its Jews, Maurice moved to Australia in 1948.

Intimate and emotion charged, the book does not shy away from employing frank and coarse language to express the feelings of the author. The sheer bluntness of the language, for example, “F*ck the French,” dramatically conveys the Maurice’s teenage anguish and anger at the time.