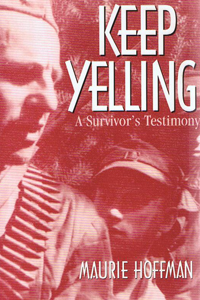 Hoffman’s testimony begins with a 15 page reflective prologue in Italy in 1945, recalling the distressing moment two years previously where he lost his family in the ghetto of Lubaczow, Poland. The next 97 pages deal with the circumstances leading to this event. He then moves into a 79 page account of the years 1943 to 1945, detailing his survival of the Holocaust. The final 85 pages address the joy of liberation and looks at the young man’s life travelling throughout Europe, describing the difficulties of returning to normal life and the crisis of faith caused by the events of the Holocaust. Hoffman’s account was written whilst the memories were still fresh, during his time as a young man after the war in Cremona, Italy. He let the manuscript lie until he felt that his children were at an age where they could better understand their father by reading his story. It was subsequently published in 1995.

Like an old man recalling his distant childhood, the young Hoffman, born in Lubaczow in 1929, recalls the mental strain of hiding outside of the ghetto in the cellar of his family home. The days of Russian occupation and relative safety for the Jews of Lubaczow had disappeared. Darkness, dankness and fear now pervaded everything. When his father was shot in 1943, trying to return to his family from the ghetto, Moses’ mother pleaded with the boy to run away and save himself. With a heavy heart, Moses escaped into the forests of Galicia, never again to see his mother of sisters alive.

Moses spent the next two years living in the forest, surviving the dangers of Ukrainian partisans, German soldiers, hostile Poles and bandits. He escaped from prison and labour camps, a train destined for a concentration camp and survived starvation, disease, exposure to extreme temperatures and many attempts on his life. Throughout this time, Hoffman stayed strong to reach his goal – to find Russian partisans and to join in their fight against the Reich. He met many other Jews during this time who were also living in the forest, including his brother, Tobia, whom he thought dead. They joined together and assuming the role of Polish partisans, they sabotaged German military activities, fought Ukrainian partisans and strove for justice against those who had sought to destroy the Jews.

Hoffman and his group were rewarded when, in July 1944, they observed the advancing Russian troops liberating Poland. The initial jubilation subsided quickly for Hoffman and instead he felt empty. His freedom had come at an enormous personal cost. Stripped of his identity, with his entire family dead along with 90% of the Jewish population of Poland, he had nothing left to live for. He couldn’t even turn to his faith, for God had seemingly abandoned Hoffman and his people. His roots were dead. He returned to Lubaczow, but though defeated the Reich’s anti-semitic hatred still lived on in Poland. He travelled south after the war, in an effort to reach Palestine. He got as far as Italy, his illegal transport boat stopped by British troops patrolling the Mediterranean. He stayed on in Italy for some years before immigrating to the ‘Golden Land’ of Australia in 1949, to begin a new life with a new family of his own.