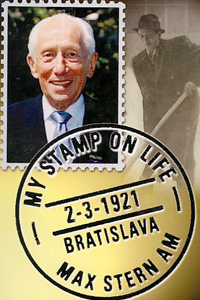 My Stamp on Life is the fascinating life story of Max Stern, a life shaped by his passion for stamps. The first 53 pages describe Max’s life in Bratislava, both before and during Nazi occupation. Pages 54-65 briefly describe his experiences in Sachsenhausen and Lichtenrade, as well as the ‘death march’ preceding liberation. Pages 66-109 tell of Max’s return to Bratislava and the re-establishment of his stamp business. Pages 110-155 deal with his new life and burgeoning stamp empire in Melbourne. There are also numerous photos and documents throughout the book. The book was written late in life at the behest of his daughters, and was published by Makor Library in 2003.

Max Stern was born in 1921 to an Orthodox Jewish family in Bratislava, Czechoslovakia. He was educated at a Jewish school and at the age of twelve he developed an interest in stamp collecting, a hobby that was to shape his life from that point on. He soon became a successful stamp trader and by the age of 14 was already earning enough to pay for his education. In 1936, Max began studying engineering at a college in Vienna. On his frequent trips home he turned a tidy profit selling stamps he had bought in Vienna.

Following the German invasion of Czechoslovakia in 1939, Max’s father’s haberdashery businesses in the Sudetenland were lost, leaving Max to be the main provider for his family. Through his attendance at stamp markets, Max was able to establish connections with stamp dealers all over Europe. The German invasion created a new state, Slovakia, whose stamps were in high demand. Through a contact in the post office, Max was able to obtain much more than the maximum allocation, and in doing so established himself as a prominent professional philatelist.

In May 1939 two of his brothers were sent to England as part of the ‘Kindertransport.’ Under anti-Semitic legislation introduced by the new fascist Slovakian government, Jews were forbidden from running businesses. Fortunately, in 1943 Max was able to find an obliging Aryan, Maria, to ‘adopt’ his business and Max continued to trade stamps from a small stall inside her shop. Through his stamp dealing Max often visited police headquarters, eventually making friends with members of the force, including the secret police. When a German arrested Max for having false papers, a police officer at the headquarters exclaimed, “Maxi, not you again!” They shared a bottle of wine before heading home.

One night Max was captured and sent to the Zilina labour camp. After a few weeks he was able to escape and return to Bratislava. Due to his connections with the secret police, and owing to the fact that he was an international stamp trader who brought in foreign currency, Max was able to maintain a modicum of security. On the night of Yom Kippur 1944, however, the Germans declared that the area was to become ‘Judenrein’; all exemption papers were cancelled. Max’s family hid out before they were betrayed and taken off to Marianka, then Auschwitz. Max went into hiding with some friends at the ‘Redoute’ theatre, concealing themselves between the ceiling and the roof. Eventually they were discovered, but narrowly managed to escape the Gestapo raid on their hideout. They found temporary refuge in a nightclub before being captured by the Gestapo. Max was taken to the Sachsenhausen Concentration Camp, at which point, Max claims that his humanity ended and, “an animal instinct of survival took over.” He was transferred to Lichtenrade and put to work clearing rubble and building barricades, all on starvation rations. As the Russian front approached, the camps were evacuated and the prisoners sent out on a ‘death march.’ Anyone who could not keep up was shot on the spot. One morning the prisoners woke up to find the German soldiers had fled. After collecting bundles of German currency from a destroyed bank, Max headed home to Bratislava. It proved to be a painful homecoming as Max discovered that his immediate and wider family, with the exception of two sisters, had been killed.

Max was, however, able to successfully rejoin the stamp trade. Due to the fact that he often travelled to other countries on business, Max was forced into becoming a small time spy for intelligence agency. Max was married in 1948 and with the political situation worsening, he and his wife decided to leave Europe. In July 1948 Max arrived in Melbourne after a series of flights. The remainder of the book charts Max’s successes in his new homeland. He returned to religious practice but it took a long time to return to religious belief. Max’s stamp business has grown from strength to strength. His company is one of the worlds best known stamp dealers and in 1999 he became a Member of the Order of Australia (AM) for his contributions to philately.

Although WWII was a critical event in Max’s life, his story does not end with liberation. He devotes substantial space to the growth of both his family and his business in Australia. Max’s story is tragic, yet ultimately uplifting, while the surprising and ever present role of stamps in his life make his story all the more engaging.