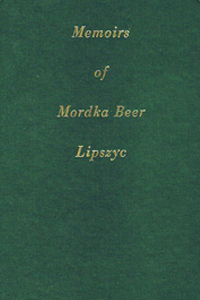 The name of Lipszyc’s book is indicative of its content; in all its aspects it is a memoir or a diary of his life. It is a relatively brief account, 67 pages in total, describing his life experiences starting in Opoczno, Poland, through to his arrival in Melbourne. The first 13 pages of the book deal with Lipszyc’s childhood and young adulthood in Poland. The following 31 pages primarily focus on his experiences during the years of Nazi occupation of Poland. The final 33 pages are devoted to Lipszyc’s time in the Polish army and then the Haganah, and his subsequent immigration to Canada and, finally, Australia. Lipszyc’s account was written well after his immigration to Melbourne, and was published privately in 1998.

The initial part of the book deals with Lipszyc’s life in Opoczno. Born in 1920, he primarily talks about his family and their lives in the workforce. Lipszyc’s life there was a happy one, filled with close family ties, religious and cultural events. Lipszyc became an excellent student at school and made a number of close friends, although he was always in a number of fights with classmates. It is at this stage that Lipszyc writes about the rising anti-Semitism in the district, even before the war started.

When war broke out in 1939, Lipszyc describes how he was apprehensive, yet states that the behaviour of the Germans in Poland did not suggest that they were preparing to perpetrate atrocities against the Jews. After war was declared, Lipszyc writes about a period of personal upheaval. He tells of his incredible feats of personal stamina and determination, including a time in early 1939 when he walked all the way from Lodz to Warsaw. Once in Warsaw, he describes the difficulties he faced including obtaining food, hiding in bomb shelters during raids, and his unsuccessful attempts to gain passage to the United States, Great Britain and Australia. At this early stage in the war, embassies were already being evacuated. Lipszyc describes Warsaw in graphic detail after it had been invaded by the Germans, and relates that after the invasion was complete, he saw Hitler at the head of a military parade, marvelling at the destruction that his troops had carried out.

From Warsaw, Lipszyc made his way back to his hometown, Opoczno. There he found employment secretly teaching English, until the Judenrat employed him to work for them outside of the ghetto. Lipszyc relates that the Pole with whom he worked, who was despised by many in the Jewish community, had in fact worked very hard to save lives. At one point, he managed to secretly obtain false papers for German-speaking Jews to go to work as Poles in German labour camps, where they would be more likely to survive. When the Opoczno ghetto deportation took place, Lipszyc, because he had been working for the Judenrat, was one of the approximately 150 Jews who remained. Although he tried to organise for his family to also remain in the ghetto, they ended up on the train to Treblinka. Lipszyc soon escaped the ghetto, finally making his way to Warsaw, where he hid with a Polish family, the Jabubowskis.

Lipszyc devotes the latter part of his memoir to his life toward the end of the war, when he fought with the Polish army against the Germans, and after the war had ended. He details how he travelled to Israel, Canada and finally to Australia. In this part of his life story, he expresses his emotions in greater detail, primarily in relation to his divorce from his first wife, and his visit to Poland many years after the war. On his visit to Poland, Lipszyc is reunited with a 93 year-old Mrs Jakubowski, the woman who had given him refuge during the war.

Lipszyc’s book reads very much like a journal or a diary. It is descriptive, personal and free-flowing. The book is not divided into sections or chapters, giving it the feel of a personal account not necessarily written for publication. Lipszyc seems to remember events well, although the chapterless layout accentuates the free-flowing feel of the book. As he mentions a particular person, Lipszyc will often digress and discuss later events that involve that person before returning to the event at hand. There are also some seemingly important events that are described only briefly; this is probably a function of the book being written so many years after the events discussed. A genuine, personal, moving account, Memoirs of Mordka Beer Lipscyz opens up for the reader the tragic yet hope-filled, unique experiences of the author.