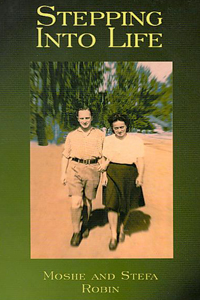 Stepping Into Life consists of the separate but parallel autobiographies of Holocaust survivors Moshe and Stefa Robin. The first account, The Weaver’s Daughter, tells the life story of Stefa Robin and her survival in Auschwitz and Bergen-Belsen (30 pages). The second, much longer account, A Survivor’s Tale, describes the life story of Stefa’s husband, Moshe. Stefa often talked about her wartime experiences and enthusiastically recorded her experiences, originally in Yiddish, for the Makor Library’s “Write Your Story” Collection. Moshe, on the other hand, was reluctant to revisit wartime memories. After falling seriously ill late in life, he wrote down his life story at the behest of his children. The book was published by Makor Library in 2002.

Stefa Robin (nee Wajngarten) was born in Lodz in 1921. Her family was poor and religiously traditional. She was educated at a Yiddish school and eventually found work as a nurse. In the lead up to the war, anti-Semitism in Lodz increased markedly. When the Germans occupied the city in 1939, the Jews were incarcerated in a ghetto under appalling conditions. In the ghetto Stefa lost her mother to starvation. Eventually the ghetto was liquidated and in August 1944 Stefa arrived in Auschwitz. After three weeks she was taken to Bergen-Belsen, where both Stefa and her sister contracted typhus. Stefa managed to survive but her sister died soon after their liberation. Stefa married Moshe in 1946 and they moved to Paris the following year. In 1951 they emigrated to Australia. Stefa discusses the challenges and rewards of her new homeland.

A descendant of the Radomsker rabbinic dynasty, Moshe-Aaron Rabinowitz was born in 1920 in Sosnowiec, Poland. His own family was traditional rather than strictly observant of Jewish law. Moshe was educated at modern Jewish schools and was a member of the Zionist group, Hanoar Hatzioni (pp. 41-50). Soon after the outbreak of war, Sosnowiec was occupied by the Germans (pp. 51-63), their synagogue burnt down and a Judenrat appointed. Moshe recalls the corruption of the Judenrat, as well as the refusal of the Poles to help with any resistance activities. Moshe worked as a slave labourer in a shirt factory, before he was taken away by the SS to the Markstadt labour camp (pp. 64-81). There he worked as an earthmover, a back-breaking task, before being reassigned to work with a cement mixing machine. At one point his soup ration card was stolen and Moshe became weak from hunger. He was transferred to Bunzlau (pp. 82-100) where, fearing that hard labour would kill him, he lied and said that he was an electrician. Moshe’s supervisor, an elderly German, soon realised that Moshe had lied. Fortunately, he was not an ideological Nazi and was happy to teach Moshe all the skills of the trade. Moshe considered Bunzlau to be quite a “mild” and “easygoing” camp. Despite the slave labour and starvation, he considered life tolerable.

This changed drastically in April 1944 when the SS arrived with a band of prisoners to take over the camp, which was renamed ‘Bunzlau Concentration Camp.’ The camp was now run by German criminals, themselves prisoners, who were often violent and cruel towards the Jewish inmates. Moshe remembers having to build a sparkling five star toilet hall which was used as a showpiece during a Red Cross inspection. As the Russian front crept closer, the prisoners were marched for weeks until they reached Ehrlich concentration camp. Anyone who could not keep up was shot on the spot. After a period of pointless labour, Moshe and the other prisoners were transported by train to Bergen-Belsen (pp.100-119). When the camp was liberated in April 1945, Moshe had not eaten for nine days.

After recovering to full health, Moshe found work as an electrician in the Glyn Hughes Hospital where he met his future wife. They married in 1946 and after a stint in Paris, arrived to begin a new life in Australia (pp. 119-155).

For decades Moshe considered his experiences too painful to talk about, in particular his final separation for his father in the ghetto on Yom Kippur. This caused Moshe to lose his faith in God. It was a scarring compound tragedy, losing both his father and his God simultaneously. After the war Moshe discovered that most of his family had not survived. Moshe’s story is tragic yet gripping, a powerful reminder to never forget the Holocaust.