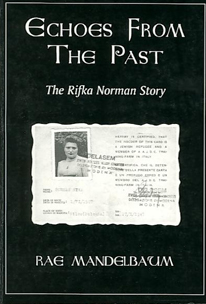 Mandelbaum presents an autobiographical account of her life as a means of coming to terms with her experiences in the Holocaust. Though the book focuses on her suffering during the Holocaust, she also gives brief insights into her life both before and after World War II. Some 20 pages deal with life in Vilna before the German occupation; 15 pages deal with life in the Vilna ghetto; 35 pages with life in various camps while the remainder of the book is a discussion of post-liberation experiences. This memoir was written late in Mandelbaum’s life and was published by the Makor Jewish Community Library in 1999 as part of the “Write Your Story” Collection.

The first section of the book deals with Mandelbaum’s life in pre-war Vilna. Born in 1927, Mandelbaum presents a brief account of her childhood with particular emphasis on her family background and memories of the Jewish festivals. Prior to German occupation she recalls that her family had considered leaving Vilna, but due to a temporary bout of paralysis she had inadvertently prevented their attempted escape. Mandelbaum later suffered from an enormous burden of guilt stemming from this event. On July 24th 1941, the Germans occupied Vilna and its Jewish inhabitants were forced into a ghetto.

Mandelbaum describes her tragic experiences in the ghetto, including the death of her mother. The Jews of Vilna were forced to live in horrible conditions in overcrowded spaces. Rations were sparse and betrayals by fellow Jews occurred daily. Frequent attempts to cull the ghetto population culminated in September 1943, when the ghetto was sealed, final deportations commenced and the ghetto was liquidated. Those deemed capable of working were sent to a transit camp in Estonia and from there to labour camps. After working at various labour camps in Estonia, Mandelbaum was sent to Stuthoff Concentration camp in September 1944. Separated from her father, she never saw him again.

Mandelbaum was soon selected to work in a munitions factory in Ochenzahl, Germany. In April 1945 the factory closed down and Mandelbaum was transported to Bergen-Belsen. After eight days the camp was liberated by the British. However, liberation did not end the suffering of the prisoners, and many fell victim to disease or over-eating. In the aftermath of the Holocaust, survivors were desperate to locate family members and Mandelbaum was fortunate to be reunited with her sister and other family members. She was married in 1948 and the following year took a boat journey to begin her new life in Melbourne, Australia.

The book is written in the first person and offers a moving account of one girl’s experiences throughout the war, providing detailed description of key events and places, though tending to focus on the experiences of the narrator. This story is notable for its positive tone and in particular its emphasis on the human interactions which existed even in such horrendous conditions. It depicts the friendships which survived during the camps, the support the prisoners provided to each other as well as mentioning the gentiles who were compassionate to the workers and the few SS officers who displayed some aspects of kindness. This memoir is a poignant tale of Holocaust survival against all odds on account of Mandelbaum’s strength of character and determination.