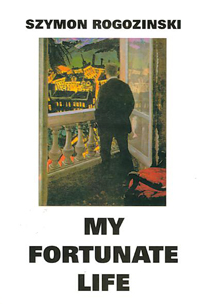 Szymon Rogozinski originally wrote his memoir in 1993, in Polish. Published a year later in Poland, it was then translated into English, edited and re-published in Australia by Andrew Firestone, Rogozinski’s nephew. Written late in life, the book covers in depth the years of Rogozinski’s life until the immediate aftermath of World War II. The first 92 pages of My Fortunate Life describe life in Lodz before the war, the trauma of the outbreak of war, and Rogozinski’s decision to flee to Warsaw. Pages 93-128 tell of life in the Warsaw Ghetto until his escape in early 1943. Pages 129-180 relate Rogozinski’s experiences in hiding on the ‘Aryan side’ of Warsaw until liberation, and his subsequent attempt to begin rebuilding his life after the war. Finally, an ‘afterword’ written by Arnold Mostowicz, a noted Warsaw writer, appears on pages 181-186.

My Fortunate Life begins with a vivid, detailed description of life in Lodz during Rogozinski’s childhood. His in-depth description goes as far as describing the various newspapers that circulated in the town. Born to religiously observant, Polish-speaking parents, Rogozinski and his siblings were less religious than their parents. From a young age, Rogozinski was a Zionist. He discusses his attraction to the philosophy of cultural Zionist Ahad Ha’am, and his involvement in the youth Zionist organisation, Yardeniah (later, Herzeliyah). Rogozinski studied law, believing that that profession would allow him to be a “fearless defender of persons wronged”. Anti-Semitism in pre-war Lodz was rife, making life, as well as Rogozinski’s fledging law career, difficult. His younger brother, Kazik, left Poland for Palestine after workers in a hose factory held a strike to protest working with him, a Jew.

When war breaks out in September 1939, Rogozinski briefly makes his way to Warsaw to join the war effort against the Germans, but quickly returns to Lodz as he learns that the resistance has collapsed. The law firm that employed Rogozinski soon closes down, and he accepts a position doing administration work for the Judenrat under Mordechai Chaim Rumkowski. He never actually starts work; when the Gestapo summon members of the Zionist Committee for a ‘meeting’, Rogozinski and his wife Fania flee to Warsaw.

In the Warsaw ghetto, Rogozinski manages to find work in a candy factory, but conditions deteriorate quickly. Lack of food and random shootings of Jews by Germans leave the residents of the ghetto living in hunger and fear. When mass deportations from the ghetto begin in July 1942, Rogozinski avoids being taken by hiding with his colleagues in what remains of the candy factory where he had worked. That September, the remaining inhabitants of the ghetto are put to work, Rogozinski in a brush factory. On January 18, 1943, another selection takes place; this time, Fania is taken away. Rogozinski never saw his wife again.

In February 1943 Rogozinski, with the help of his brother, Lutek, escapes from the ghetto to the ‘Aryan side’ of Warsaw. He remains in hiding, periodically moving from place to place in order to avoid capture. In August 1944, the Warsaw Uprising begins. A friend from the Peoples’ Army (AL) takes Rogozinski through sewers to escape the Germans. He then joins the uprising through the Polish Socialist Party. By October 1944, the uprising had been quelled, and Warsaw was being evacuated. Rogozinski hid with friends in a cellar until liberation by the Russians in January 1945. Following the war, Rogozinski and his second wife, Anna, returned to Lodz, where they began to rebuild their lives. As they came to realise that Poland was not where they wanted to be, they made plans to leave for Israel, via Melbourne. For reasons that Rogozinski does not go into, they stayed in Melbourne, building a new life there.

My Fortunate Life is eloquently written, detailed and vivid in its recreation of events, places and people. Rogozinski’s attention to detail comes across particularly in his meticulous description of pre-war Lodz. The book also contains reflection on the moral dilemmas faced by Rogozinski and those around him. Regarding the evacuation from Poland of Zionist MP Hartglas, Rogozinski questions: “[S]hould a political activist remain at his post until the tragic, unavoidable end?... is it right to save certain meritorious persons at the expense of others? To this day I have not determined the answers to these questions.” My Fortunate Life is a thoughtful, insightful book that provides an enlightening insight into the markedly unfortunate war experiences of Szymon Rogozinski.