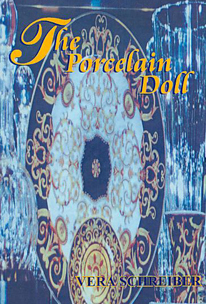 211 pages in length, Vera Schreiber’s The Porcelain Doll was written about 50 years after her experiences during the war, and after “many decades of blocked memories and assumed indifference”. The early chapters of the book deal with Vera’s memories of the war period. The rest of the book describes her life after the war in Switzerland, Romania, France, England and Brazil. On pages 11-15, Vera gives a brief family history, and tells of the few memories that she can recall from before deportation. Pages 16-33 tell of the period she spent as a small child in the Bergen-Belsen concentration camp, until being taken to safety in Switzerland. Pages 34-60 describe Vera’s experiences in Switzerland, her return to her hometown, Cluj, after the war and her family’s subsequent escape from Communist Romania to France. On pages 61-107, Vera relates details of her new life, at first in Paris and then at school in London. Pages 108-155 tell of her family’s immigration to Brazil, and Vera’s subsequent return to London to finish school. Finally, pages 156-211 describe Vera’s return to Brazil after finishing school, and her life there until the 1970s.

Vera was born in Cluj (Kolozsvár in Hungarian), a town near the Romanian-Hungarian border, during the war years (1939). Her first memory is of her father being taken away from home; he had been taken to the Ukraine for forced labour. In 1944, Vera and her mother were taken to a ‘ghetto’ in a tile factory, outside of Cluj. From there they were taken to Budapest and then deported to Bergen-Belsen in July 1944. Vera’s memories are patchy; she remembers important events, but often does not recall the processes that led to them, as she was very young. She describes the harsh conditions at Bergen-Belsen – the widespread sickness, the lack of food, and the confusion that prevailed. Nevertheless, her conditions, she says, were better than those of many others. Vera and her mother were in the camp together with the Satmere Rebbe, a prominent religious figure, and they did not have to do slave labour. They were eventually taken on trains from Bergen-Belsen to safety in Switzerland. At the time they were not aware of what was going on; on the trains out of Bergen-Belsen, she says, they could tell that they were going somewhere better but they did not know where. Only later did Vera learn of the significance of the way she was taken to safety – the trains that took her and her mother were later to be known as the ‘Kasztner Transport’, after the man who organised them, Resző Kasztner. Kasztner, a Hungarian Zionist leader who became a controversial figure, negotiated with Adolf Eichmann to exchange Jewish lives for trucks and other goods. Though the negotiations ultimately fell through and the deal did not go ahead, the discussions did lead to the Germans’ transfer of two transports from Bergen-Belsen to Switzerland. One of them contained the young Vera Schreiber.

Upon arrival in Montreux, Switzerland, Vera’s mother and many others from the transport became ill, as their bodies were used to being starved and not to having abundant food. Luckily, the available medical care meant that they were able to recover quickly. Vera and her mother settled in Switzerland, and began a transition into a relatively normal existence – for Vera, this was her first experience of normality, as most of her memories were from Bergen-Belsen. Her mother contacted relatives in Hungary who informed her that almost all of their large family had perished; she still lived in hope that her husband was alive. Finally, after the end of the war, they heard from Vera’s auntie that her father had returned to Cluj, weak but alive. Vera and her mother soon returned to Cluj, to be with her father.

The remainder of the book describes Vera’s tumultuous life after the war. When conditions under Communist rule in Cluj became unbearable, her family fled illegally for France, via Hungary. She was nine years old at the time. Vera’s parent’s sent her to live with an Orthodox Jewish family in London to go to school. There she became interested in her roots and in Judaism. Later, the family relocated to Brazil, where her parents, too, began observing the traditions that they had abandoned during the years of the war. Vera missed England and soon went back there to complete her studies, before returning to Brazil. She met her husband in Brazil, and describes her life there until the passing of her mother in 1970 (her father had died some years earlier). Vera moved to Australia just five years before writing her book. Though she mentions this, she does not describe the process that led to her immigration.

Vera writes articulately and eloquently. She occasionally switches to an italic script, to present her thoughts as a young child, in the first person. At some points during her description of the war years, she includes reflections that came about after she had written. For example, when a relative or a friend remembers an event differently from the way she remembered it herself, she preserves what she had originally written, but tells of their alternative version in italics. Vera was very young at the time of the war, and as such her recollection of that period especially is often in the form of disconnected ‘episodes’, sometimes clarified with details learned in later years (she informs the reader when she is ‘filling in the gaps’). Reflective and moving, The Porcelain Doll is a sophisticated presentation of the experiences of a young girl during the war, and the life that was forever changed by those years.