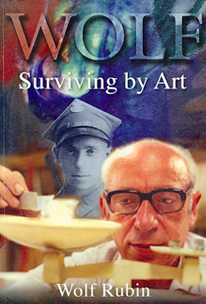 Wolf: Surviving by Art is the brief life story of Wolf Rubin. The first 33 pages depict Jewish life in the town of Zychlin, while pages 34-49 describe Wolf’s journeys across the Soviet Union, including Vologda. Pages 50-65 portray Wolf’s experiences in Stalinabad, while pages 66-74 tell of his time in Europe following the end of the war. The remainder of the book, pages 74-102, outlines Wolf’s new life in Australia, as well as containing numerous photos taken throughout his life. Wolf wrote his life story for his children and grandchildren, and it was eventually published as part of the Makor Library’s “Write Your Story” Collection in 2003.

Wolf Rubin was born in 1916 in Zychlin, Poland. The seventh of nine children, he grew up in a prosperous Orthodox family. Wolf describes the rich Jewish life in his home town; the rituals of shabbat, including collecting the family cholent from the bakery oven, and the various festivals. Although Jews represented half the population of the town, they suffered from acts of antisemitic violence and hooliganism. Wolf joined the Zionist movement Hashomer Hatza’ir at age 14 and at age 16 began an apprenticeship with a nearby artistic master. Wolf dreamt of moving to Palestine, so on completion of his apprenticeship he joined Kibbutz Bilu in Lodz, where young Zionists trained for life on the land. Realising he would have to wait a long time for a British permit, Wolf returned home after a year.

In March 1938 Wolf was conscripted into the Polish army. Fortunately, he was moderately wounded during his first battle and was thus withdrawn from the front line, where the majority of his unit was killed. He was subsequently captured by the Germans as a prisoner or war, but managed to escape home. After the occupation of his home town, Jews began to be publicly humiliated and drafted into forced labour squads. Wolf decided to flee eastward with his brother, and managed to successfully evade both German and Russian border guards.

In the Soviet Union, Wolf requested to work in the south but was instead sent to Vologda in the north. Wolf soon found work as a signwriter and was able to earn a reasonable living. The temperature in winter, however, was up to fifty degrees below zero, prompting Wolf to relocate to his original destination, Dniepropietrovsk. As the German front advanced, Wolf was briefly arrested as a suspected German spy before relocating to Stalinabad (Dushambe), near Afghanistan. In Stalinabad Wolf found accommodation with a large family from the local Jewish community, who were all traditional Buchara Sephardi Jews. Wolf worked as a painter and upholsterer in a local factory. He was also able to use his artistic skills to forge extra ration cards. Wolf also survived a bout of malaria and narrowly escaped conscription into the Soviet military.

After the conclusion of the war, Wolf returned home to Zychlin only to discover that all of his family had been killed. Knowing that he had no future in Europe, Wolf left to begin a new life in Australia in 1948.

Wolf’s story is recounted with clarity and simplicity. It tells the story of a modest and endearing character whose life was sustained through his artistic skill and creativity.