In October 2012 we launched the Count Border Deaths campaign to raise awareness that people who die in Australian immigration detention centres or other Australian migration custodial settings are not counted in Australia’s death in custody statistics. 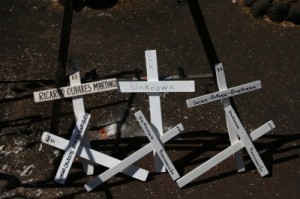 The campaign received plenty of media attention, and in February 2013 we received news that a proposal is currently being developed to start counting the deaths of people who die in Australian immigration detention centres or other Australian migration custodial settings in official deaths in custody statistics.

What is the issue?

It is common knowledge that people are dying trying to come into Australia by boat, and others are dying in Australian immigration detention centres or other Australian migration custodial settings.

What isn’t common knowledge is the fact that deaths in migration custodial settings are not counted in Australia’s official deaths in custody statistics recorded by the Australian Institute of Criminology, National Deaths in Custody Monitoring Program (NDICMP).

The Border Crossing Observatory has launched a campaign to raise awareness and encourage the Australian Institute of Criminology (AIC), with the support of the Department of Immigration and Border Protection (DIBP), to start counting these deaths in its NDICMP reporting.

Counting these deaths is vital to informing immigration border control policy and would greatly increase the knowledge base of deaths that occur under the custody of Australian law enforcement officials.

Counting these deaths would indicate that the deaths of non-citizens while under the care and control of government officials are being accorded the same significance as the deaths of Australian citizens.

What you can do

Show your support for the AIC to count these deaths in their monitoring and reporting by: