In War and Peace: Economic gender-based violence and its persistence

… “As an example,” Svetlana continued “we had a call last week from a woman who couldn’t access food in the fridge at home, because her husband had pad-locked it – apparently to save money. The worst part of this example, is that it is not an uncommon one”.

Economic gender-based violence (GBV) is defined as “any act or behaviour that causes economic harm to an individual”, such as controlling an individual’s access to work, food and money, squeezing or denuding them of money/property, deprivation of documents, or forcing them to work for a pittance. Much of the discussion surrounding GBV focuses on its physical, sexual, and psychological manifestations. However, in the context of profligate austerity practices, increasing privatisation, exploding inequality, and the domination of global capital over every facet of life, economic GBV must be given the same sense of urgency. The interaction with Svetlana above, a small sample from a month of field research in Ukraine, attests to this need. A critical feminist global political economy approach to the crisis of economic GBV demonstrates how global practices of financialisation, commercialisation, marketisation, and consumerism drives violence against women: whether at the hand of husbands who cut-off women from food, money, and employment; companies who pay women less for their work and provide miserable working conditions; international financial institutions that promote reforms that strip away social services that disproportionately target women; or androgenic states that are built on male power andviolence. This blog will briefly address the problem of economic GBV in Ukraine, a country that has transitioned from the state-centric dogmatism of Soviet economic planning to an ostensibly ‘free’ liberal market economy, and from a time of relative peace (though not for women) to the 2014 War in Donbass. The blog aims to not only stimulate wider discussion on economic GBV in 2018’s 16 days of activism against GBV, but also to interrogate the general conception of the neoliberal market economy as gender-neutral and an equalising platform.

The legislative apparatus in Ukraine suggests the country is ‘woman friendly’. After all, gender discrimination is prohibited in the Constitution and in Ukrainian law , and the country ratified the ‘Convention on the Elimination of All Forms of Discrimination against Women’ in 1980. However, gender inequality has been fundamentally enshrined in Ukraine throughout its modern history within the Soviet Union and in independence, where a resurgence of conservatism and religiosity, along with market fundamentalism, has curtailed women’s rights. Indeed, Ukraine has poor rankings in the Gender Inequality Index (#61) and the Global Gender Gap Index (#69). Women who are facing multiple, intersecting forms of discrimination, such as women with disabilities, women living with HIV, ethnic minority women, LGBTIQ, and internally displaced women, are much more vulnerable to all forms of GBV, and are much more unlikely to report problems to police due to their status, stigmatisation, and systemic discrimination. As an example, 1 in 3 women living with HIV (35.3%) have experienced violence from their partner or spouse. 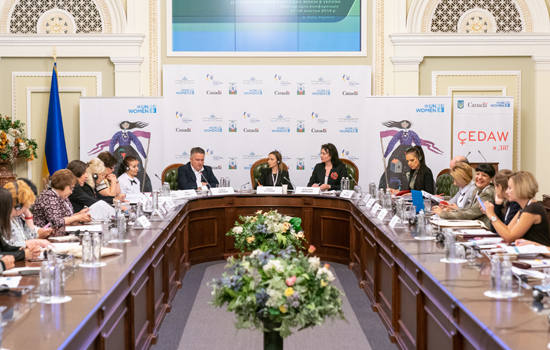 Since the fall of the Soviet Union, Ukraine has plunged into consistent economic crisis, as international financial institutions such as the International Monetary Fund (IMF) and the World Bank have forced the country to take on ideologically-driven, market fundamentalist neoliberal reforms. This has seen Ukraine selling off its public assets, the loss of jobs and unemployment (especially for women), cuts in child support, widening inequality and surging poverty, the increasingly unmanageable cost of gas and utilities on households, a hugely significant decreasein the pension, an economic and social crisis in rural areas, and a mass exodus of Ukrainians from the country. As documented by the Women’s International League for Peace and Freedom, amongother NGOs in Ukraine, women have faced the brunt of these economic reforms, due to thecentrality of unpaid women’s work (housework and care labour) to the reproduction of capitalism that exploits, and inherently relies on, this free labour.

The most recent Ukrainian economic crisis originated in tandem with the ‘Revolution of Dignity’ and the beginning of the War in Donbass in 2014, where GDP dived, and inflation dramatically rose. The Ukrainian government, depending on IMF support, cancelled fuel subsidies, cut social support, and increased the retirement age, which has further put the Ukrainian populace under stress. As of 2016, 63% of urban, and 71% of rural, households have an income below the subsistence level (calculated  about $AUD85.8/month – a basic meal for one person costs about $AUD5). As this latest economic crisis has progressed, violence against women has increased. In 2007, the percentage of women experiencing physical or sexual violence was 18%, by the end of 2014, it was 22%. La Strada Ukraine, operating an emergency hotline for victims of domestic violence, has had an increase in calls relating to domestic violence from women since 2014.

This increase in violence has been argued to not only be due to the War in Donbass, but a continuation of the normative violence that existed in Ukraine prior to the war due to gender inequality, discrimination, and patriarchal norms. Expanding on this further, GBV is inherently related to the economic inequality that women experience, primarily determined by women’s predominant role performing free labour in the home. Evidence indicates the centrality of economic violence to women’s discrimination, with over 12% (8,115) of all calls to the Ukrainian National GBV hotline relating to economic violence. Somewhat surprisingly, 15% of men have alsoself-reported using economic violence against their partners in Ukraine. Further, in a recent surveyin government-controlled, conflict affected areas in the Donbass region, economic violence was the second most common form of GBV reported by all respondents, at 24% both before and during the War in Donbass; and economic violence was the primary form of violence for internally displaced women living in the community, with 38% experiencing it.

Indeed, Ukrainian women with intersecting identities are at even greater risk for economic violence, with displaced women, older women, women with disabilities, Roma women, and LGBTIQ women at a heightened risk of forced labour, trafficking, limited employment opportunities, and an inability to register for social support. All Ukrainian women, however, take a disproportionate burden of household tasks and care labour, spending approximately 29 and 49 hours per week in these tasks, respectively (compared to 15 and 22 hours for men). Aside from these alarming developments, the economic crisis has also had a profound impact on the likelihood of employers hiring young women, who don’t want to have workers go on maternity leave or take time off looking after kids, and women’s shelters, supposedly providing women with a safe haven from increasing domestic violence, have been closed, are frequently full, or are prohibitively difficult to access – especially for displaced and Roma women.

In a condensed form, this blog has begun to demonstrate that economic GBV perpetuated against women by husbands, the state, and financial institutions is at the heart of women’s subservient position in society, and the continued reproduction of global capitalism. The continuation of a critical feminist global political economy approach to GBV is urgently needed to uncover the full extent that economic exploitation and violence disproportionately affects women, especially as many regions in the world continue to move towards further austerity, with inequality rapidly increasing.

Elliot Dolan-Evans is a doctoral candidate at Monash University, working on the Australian Research Council Linkage Project, “Towards Inclusive Peace: Mapping Gender Provisions of Peace Agreements” partnering with the Department of Foreign Affairs and Trade (DFAT). This article is drawn from the author’s field research conducted for the project.