We attended masterclasses with the support of the DFAT on 14 October.  At the masterclass on “Intelligence and Diplomacy”, David Irvine and Geoffrey Miller shared their experience and views on a range of issues pertaining to Australian security including information and intelligence sharing, terrorism and engagement with Asia, particularly in terms of China. A key issue that dominated the discussion was the increasing challenge of cybersecurity.  How state-sponsored cyber activity could undermine national security was explored, as was the threat of cyber-attacks to democracy and elections in light of Russia’s alleged hacking and influence in the US elections

At the session on “Australia and the Indo-Pacific”, retired Australian ambassadors Dr. Sue Boyd and Richard Smith provided detailed accounts of their experiences working in the Indo-Pacific region: especially since they were in office during the Fiji coup (2000) and Bali bombings (2002) respectively. Boyd highlighted the shift in the nature of Australian engagement with partner nations, moving from a “let’s go and do a project in a particular country to let’s create enabling learning environments and empower communities to lead their own projects”. The masterclasses were followed by a reception at the Embassy of Poland, where we had the opportunity to network with young professionals and students (and enjoy pierogi!). Security issues and Australia’s relationship with both the US and China dominated discussions throughout the day. The conference was opened by Minister Marise Payne speaking largely on Australia’s commitment to the international rule-based order. Minister Payne brought to attention the role Australia has been playing in foreign policy globally and stated that strong bilateral and multilateral cooperation is needed going forward and that the government of the day will continue to engage in productive disagreements with partner nations, where needed. She emphasised that Australia is committed to creative and constructive cooperation in the region, and noted that “we are in the midst of a major strategic realignment in the Indo-Pacific”.

Next, the Labor Party shadow foreign minister Penny Wong, spoke in-depth about nuclear disarmament. She quoted Ronald Reagan in reiterating that  “a nuclear war can never be won and is one that must never be fought” and that the The International Court of Justice is clear in its view that there is no circumstance in which the use of a nuclear weapon would be consistent with international humanitarian law, given it dire consequences. Moreover, Wong strongly articulated that if Australia was to show the world that it is truly committed to action on climate change, it had to ensure change in domestic policies and implementation locally before advocating globally. 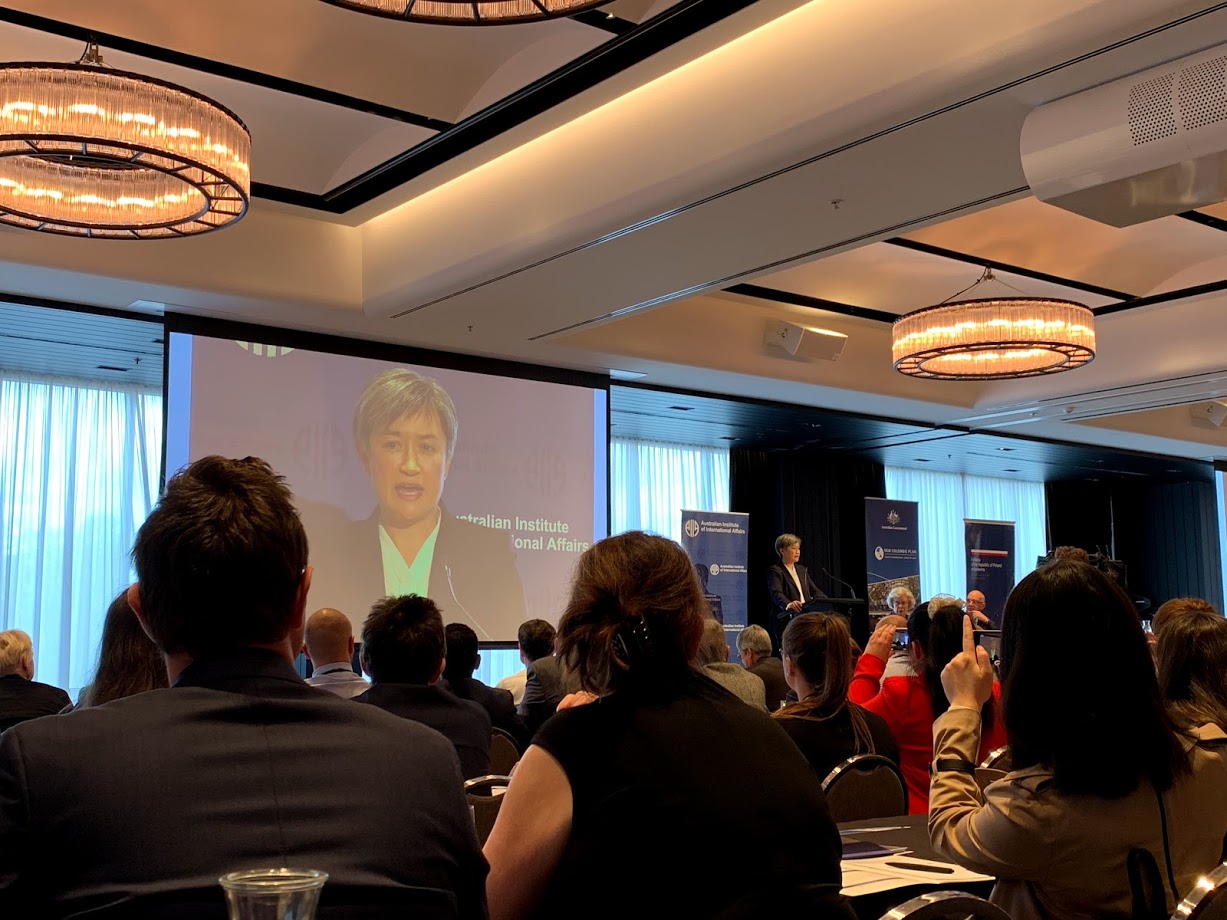 As the day progressed, conversations and questions allowed for critical and crucial conversation and also served as a reality-check: A reality-check for all the great work Australia has and is doing in to promote health, science, education internationally but also a check on the limited capacity Australia has to advance the global development agenda and the great deal that still needs to be done to achieve goals like gender equality and the eradication of poverty. Regrettably, there was no discussion of the role of women in this advancement of the international development agenda, although it was positive to see a strong representation of women on the panels. Christine Milne, in her address pointed out how global warming and climate change need to be first order issues: their threats cannot be undermined and require immediate action and commitments. As Mary Robinson has previously said “climate change is a man-made problem with a feminist solution”, and women can play a key role in climate change action, particularly in terms of overcoming key issues pertaining to women’s vulnerabilities including throughout the Indo-Pacific.

There were various discussions on Australia’s role with the growing influence of other states in the region and how Australian was looking to constructively engage with them in the near future. Panelists appeared to stress adherence to the “rules-based international order” based on alliances, norms, rules and institutions, and agreed that there was a growing nexus between domestic and international security. Yet at the same time, some speakers stressed that we need to speak up as a nation in defense of universal human rights. Given that Australia was elected to serve on the UN Human Rights Council for three years between 2018 and 2021, this places us in a position to push for the maintenance and enhancement of women’s human rights and potentially become a leader in the Indo-Pacific region.

Concluding remarks from Melissa Conley-Tyler National Executive Director of AIIA, reiterated the vision of the national forum  - to bring together people to discuss and debate issues of concern for Australian foreign policy. We believe that women have a strong role to play in the enhancement, and advancement of Australian national security and international security. Some questions were answered, some not, but it is clear that there is a lot that is left to be done to make the world a better place for many and that Australia has a vital role to play in pushing agendas for security, development and human rights.