There is Hope - Women's Participation in the 2018 Fiji Elections

Fijians across the globe voted in national elections last month and witnessed a new parliament on 26th November. Fiji First party formed government with 27 seats, and the opposition includes Social Democratic Liberal Party - SODELPA (21 seats) and National Federation Party (3 seats). However the heads of both sides remain former military personnel, responsible for military takeovers of parliament, Rabuka (twice) in 1987 and Bainimarama in 2006. In what is now considered a win for women in politics in the Pacific, the 2018 elections saw 56 women stand for election, of the 248 registered candidates across parties - an increase from 18% in the 2014 elections to 24% in 2018. Of the 56 that contested the 2018 election, 10 women were elected (with a total of 25,618 votes) into the new parliament and Dr. Jiko Luveni was re-elected as speaker of the house, making it a total of 8 indigenous women in parliament.

The elections saw brilliant maiden speeches of the 10 elected candidates, showing exactly why women are crucial in these spaces. In the week long seating, various speeches were made but the women from both sides in parliament made sure to carry similar themes - those of collaboration, unity, peace and a commitment to change. From the opposition, Lynda Tabuya (opposition whip) in her maiden speech acknowledged the journey and said “I made the decision to put down my guns and extend my hand across the aisle in a genuine attempt to make Fiji the home I’ve always dreamed it would be.” Lenora Qereqeretabua, emphasised that “The voters definitely want to see a change.  I believe that behind having 10 women voted in is the hope that we will transform this house into a place where we will see more inclusiveness and bipartisanship.” She went ahead and spoke in depth on why she decided to join politics and addressed issues of citizenship, media, indigenous rights, human rights, climate change and the importance of good leadership, and suggested practical ways forward. 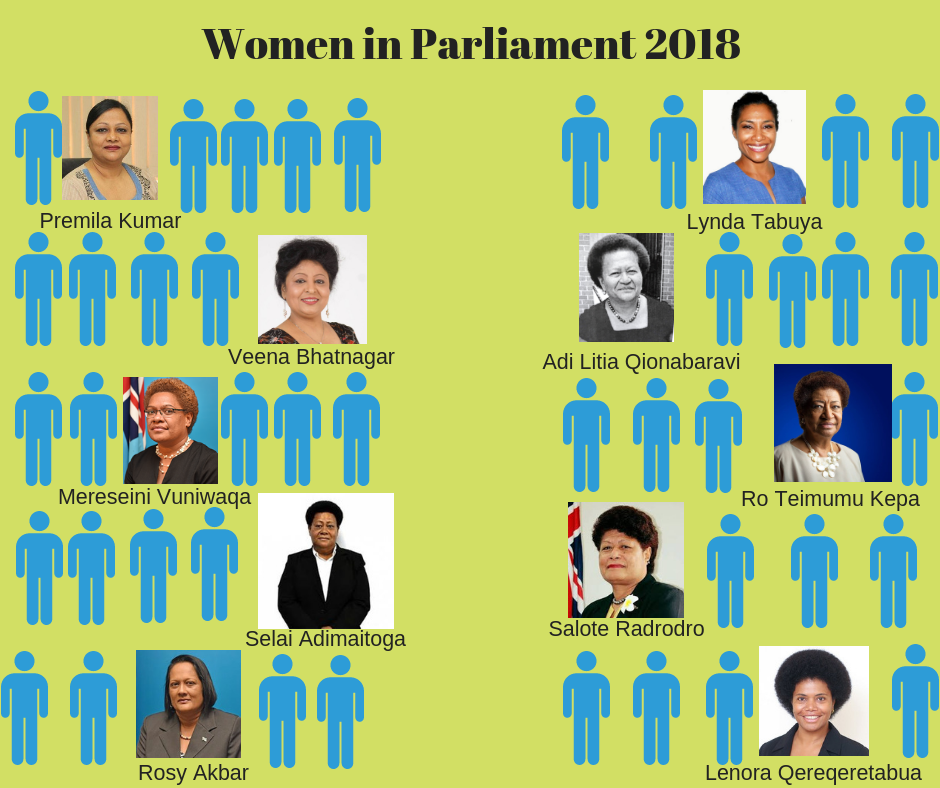 With parliaments in the South Pacific having the lowest representation of women, Fiji’s slow but steady progress serves as an assuring reminder of changing perceptions. Chattier (2015) highlighted that while it was symbolic to have the first female speaker of the house, it is crucial to note that only 15% of the total votes were received by female candidates in the 2014 elections, and there is a long way before Fiji reaches what the United Nations considers a crucial benchmark, of at least 30% women, in national parliament. Fiji takes great pride in its diversity as a multicultural nation and this is very much applicable to the women, who are by no means a homogenous group. Major differences, which played an active role during election season, are ethnicity, class, education, cultural background, geographical location and religion. As the current Minister for Education, Rosy Akbar reiterated "It is heartening to see the number of women now in parliament, needless to say, we as a nation can still do better!"

Women’s movements play a crucial role in all stages of the election process, and Fiji has been a focal point for women’s rights activism in the Pacific (Teaiwa, 2015). Nicole George’s Situating Women: Gender Politics and Circumstance in Fiji provides a comprehensive account of women’s groups engagements prior to 2012 and recognises that strategies were aimed not only to increase women’s political participation but also to encourage voters to support women. Fiji Women’s Rights Movement Executive Director Nalini Singh said: “It is encouraging to see an in­crease in women’s representation at national level. This will empower other women to par­ticipate in decision-making at other levels of society and dismantle harmful stereotypes and barriers that still exist for women.” The Pacific Islands have made progressive efforts in ensuring gender remains a component of development discussions, with all states having committed to the Pacific Platform for Action for Gender Equality and Women’s Human Rights (PPA), Pacific Leaders Gender Equality Declaration (PLGED) in addition to international frameworks such as the Sustainable Development Goals, Beijing Platform for Action and CEDAW.**

However women running for election face numerous obstacles and the Fijian women contesting the elections in 2018 were not free from harassment, intimidation, personal and misogynist attacks, especially via social media platforms. Even after elections, rather than focusing on the opening procedures many were concerned with “what she was wearing”. Continuous efforts are being made to ensure gender equality remains a priority for the newly elected Fijian parliament. As Speaker of Parliament, Dr. Jiko Luveni, recently highlighted that a Gender Parliament Committee has been initiated and a gender toolkit will assist all committee members in conducting relevant assessments prior to major legislative decisions.

As Fiji paves the pathway for women’s political participation, it remains to be seen how meaningful the elected MPs participation in politics will be in the upcoming four years. At a time when the world has seen the incredible work of elected leaders like Sahle-Work Zewde, Jacinda Ardern andAlexandria Ocasio-Cortez, and heard the everyday horror stories of #MeToo, knowing that 20% of Fiji’s parliament comprises of brilliant, educated and experienced women serves as an assurance. Assurance that women’s voices will no longer be silenced, that human rights will be prioritised, that the education and health sectors will be resourced and improved, but most importantly, assurance that there is hope!

**Tonga is not a signatory and Palau has signed but not ratified CEDAW.