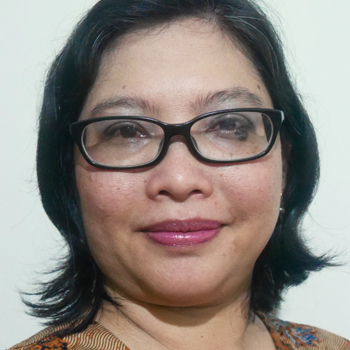 Dr. Sri Wiyanti Eddyono, SH, LLM (HR) is an Adjunct Research Fellow at Monash University. She is a Lecturer at Criminal Law Department of Faculty of Law, Universitas Gadjah Mada (UGM) Yogyakarta, Indonesia. She obtained her PhD from department of Politics and International Relations at School of Social Sciences, Faculty of Arts, Monash University, Australia. She received Allison Sudrajat Award (ASA) and Australian Leadership Award (ALA). She specialises in the area of women’s empowerment, victimology, women's access to justice, violence against women, and gender equality law and policy reform in Indonesia and Asia contexts.

She is conducting the research project on Preventing Conflict and Countering Fundamentalism through Women’s Empowerment and Civil Society Mobilization in Indonesia with Monash  Gender Peace and Security Centre and Semarak Cerlang Nusa Consultancy, Research, and Education for Social Transformation (SCN CREST), Indonesia, funded by DFAT. Her previous research project was  “When and Why do States Respond to Women’s Claims: Understanding Gender-Egalitarian Policy Change in Asia”, a comparative study on India, Indonesia, and China under UN Research Institute for Social Development (UNRISD).

She is also a feminist lawyer, researcher, and women activist. Currently, she is in charge with advocacy for the establishment of anti sexual violence bill in Indonesia. She was involved with the advocacy for the Law on Domestic Violence established in 2004. She was a commissioner in National Commission on Violence Against Women in Indonesia (2007-2009).