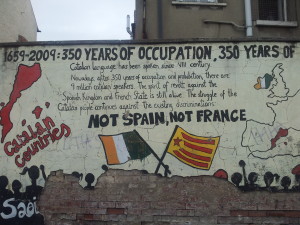 Since a million people marched on 11 September 2012 (Catalonia's national day) in Barcelona demanding the right to a referendum on Catalan independence from Spain, there has been much debate about what an independent Catalonia would be like.

For those interested in following the issue of Catalan claims for independence, you might like to listen read this piece by Dr Carlos Uxó in The Conversation as well as listen to this forum that he organised with Gillian Darcy in 2012.

The Col·lectiu Emma, a Catalan blogging collective, regularly collects articles, opinion pieces, blog posts on the topic of Catalan independence that are written in a number of languages. To visit their site, click here.

To coincide with the 300th anniversary of the fall of Barcelona in 1714, a date that some see as marking the end of the Catalan nation, the Spanish and Latin American Studies program will hold events in 2014 to discuss this matter in depth. To register your interest, please email Stewart King.

LLCL only School of Languages Literatures Cultures and Linguistics Spanish