Shedding light on a dark history 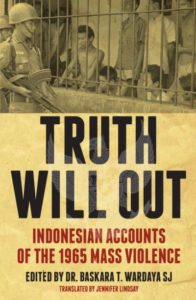 Truth Will Out: Indonesian Accounts of the 1965 Mass Violence, the first book in the Herb Feith Translation Series published by Monash University Publishing.

One of Indonesia’s most violent periods will be explored at a conference co-hosted by Monash next Friday.

After The Act of Killing: Historical Justice and 1965-66 Mass Killings in Indonesia focuses on the years when the Indonesian military, together with civilian death squads, killed an estimated 500,000 people.

The Herb Feith Foundation, the Monash School of Historical and Philosophical Studies and the Indonesia Forum at the University of Melbourne will be jointly hosting the conference.

Co-organiser Jemma Purdey said the conference will be timely, given over the past year there have been several reports and government statements issued in Indonesia about the mass killings of 1965-66.

“The release of Joshua Oppenheimer's internationally acclaimed documentary film The Act of Killing (2012) has drawn the world's attention to this dark period in Indonesia's history,” Ms Purdey said.

“Survivors of the purges have joined film makers, academics and activists to bring this history to the national and international stage, and hopefully, the possibility for future justice for the survivors, victims and their families.

“This conference will reflect on the progress so far and consider ‘what next?’ towards the pursuit of truth and justice about the mass killings.”

Coinciding with the conference is the launch of Truth Will Out: Indonesian Accounts of the 1965 Mass Violence, the first book in the Herb Feith Translation Series published by Monash University Publishing.

Key speakers will include the editors of the Truth Will Out: Indonesian Accounts of the 1965 Mass Violence, the academic community from both Australia and Indonesia as well as a satellite interview/video presentation from The Act of Killing director Joshua Oppenheimer.

The conference is open to the general public and will take place on Friday, 30 August 2013.

To find out more information please visit the Monash University Faculty of Arts website. The event is free, RSVP essential.