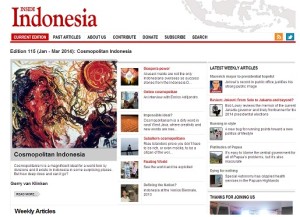 The Herb Feith Foundation is pleased to announce a grant to the Indonesian Resources and Information Program (IRIP), publishers of Inside Indonesia, to begin an extensive digitisation of the print editions of the magazine, 1983-2007. Inside Indonesia has been published online as a web-based magazine only since 2007.

In its print form, Inside Indonesia was published quarterly until March 2007. Throughout those years, Inside Indonesia provided a unique source of high quality and original reportage and analysis about issues in Indonesia which were rarely covered by other media sources. All of our past editions since we first went online (in 1996) are archived on this website. In 2007, Inside Indonesia made the transition to an internet-only format.

Purpose of Inside Indonesia

Inside Indonesia aims to provide a deeper image of Indonesia than that painted by mainstream media. It focuses on human rights, environmental, social and political issues, but is not limited to those issues. It is not an academic journal, but a publication which produces high standard, interesting, jargon free material about Indonesia by Indonesians or by others who have travelled, lived and/or done research in the country.Inside Indonesia is a non-profit endeavour, and apart from a small amount of technical support, is run on an entirely voluntary basis. None of our editors, writers or photographers are paid.

The shift to an online magazine, first partially in the 1990s, and then wholly in 2007, enabled open and wide access to a growing readership around the world – including and especially ‘inside' Indonesia. However, until now the extraordinary resource that is 24 years of the print magazine has been restricted to those with access to the archive of print magazines held in select libraries and universities. The digitisation of editions 1-45 will complete this archive as a unique online resource for students, researchers and Indonesia-watchers.