David Hanan writes of his work on Indonesian film

My work on Indonesian cinema has focused on cultural specificity.

In contrast to Karl Heider’s 1992 book I do not attempt to define a “national culture” but see Indonesia as a multi-ethnic, society where even filmmakers working in the early 1950s, making films after the achievement of independence at the end of 1949, saw themselves as also working at a sub-national level, and set out to address the specificity of regional societies and regional cultures.

In this short talk I will take two examples of films made in and about the matrilineal society of the Minangkabau in West Sumatra, Djayakusuma’s Harimau Tjampa (“The Tiger from Tjampa”, 1953) and Asrul Sani’s Para Perintis Kemerdekaan (Pioneers of Freedom, 1979), illustrating the way in which traditional cultural elements from the particular society are incorporated in the first film, and how regional history at a time of change in the society is projected in the second. 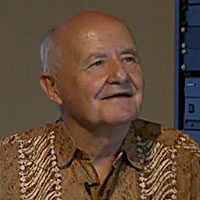 Both films address the issue of how dialogue and solidarity is achieved, even within a conflicted community, via pre-national local traditions, some of which were incorporated within state ideologies by Sukarno and others.

David Hanan pioneered the Film and Television Studies program at Monash, being the sole Lecturer in the area between 1978 and 1989.

Between 1990 and 1994 he was the Head of the growing FTV section, within the Department of Visual Arts, at the time of the appointment of two more lecturers.

In 1985 he became Company Secretary of the new organisation formed to renew the Melbourne International Film Festival, and also its South East Asian consultant, and from this position he was involved in numerous cultural relations projects with Indonesian filmmakers, resulting in growing industry links with Australia.

In 1998 he was asked by SEAPAVAA (South East Asia Pacific Audio Visual Archive Association) to be the editor of a book in which local critics, archivists and film programmers would write about film in their own countries, and this resulted in the first book to address the history of filmmaking in the SE Asian region, Film in South East Asia: Views from the Region (Vietnam Film Institute, Hanoi, 2001).

At Monash over the last decade he has introduced the first video production unit, “From Film Theory to Video Practice”, and also established a DVD distribution centre in the Monash Asia Institute, which distributes Indonesian films internationally, to schools and to universities worldwide.

He has supervised 11 postgraduate research theses, a substantial number of them being PhDs by postgrads from Asian countries.

He is currently completing a lengthy book on cultural specificity in Indonesian cinema.