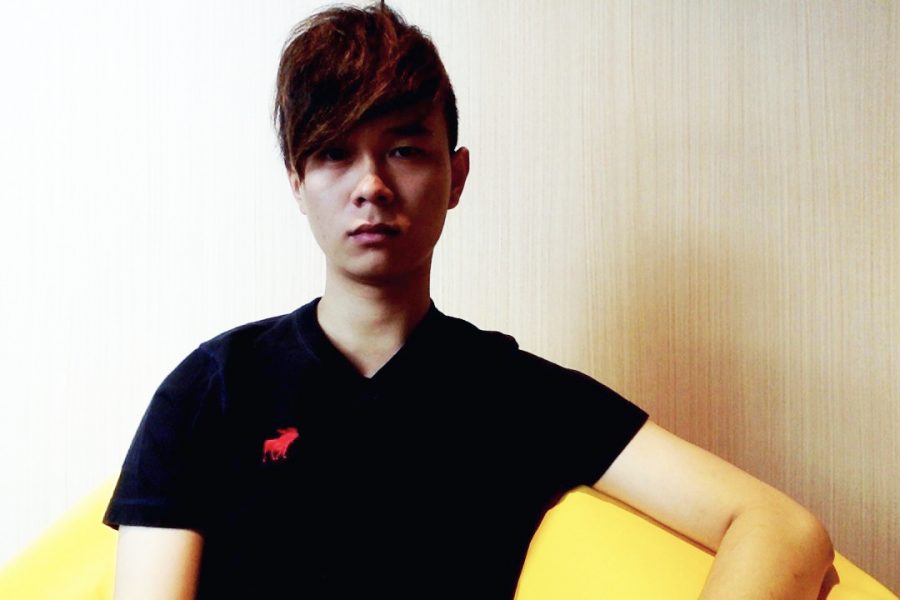 Calvin won the Monash University entry for his short story, ‘The Beggar and the Glimpse’, in the Monash Undergraduate Prize for Creative Writing, an annual prize open to any undergraduate student in Australia and New Zealand, now in its fifth year (the 2017 prize is now open closing 12 April). Award-winners are announced at the Emerging Writers’ Festival each year and their work published in Verge, a journal produced by Monash Arts Creative Writing students.

Calvin’s work centres on a story about a young man in Hong Kong dealing with the umbrella protests that happened in 2016. On the Emerging Writers’ Festival website, ‘The Beggar and the Glimpse’ features the judge’s comments:

“successfully addressing the moral tug-of-war between political action and traditional family values, taking recent political history as the subject matter. The immediacy of the story and the depiction of unfolding events were compelling. Good writing in an unconventional (non-Anglo) idiom.”

Originally from Hong Kong, we spoke to Calvin about his move to Monash, his short story as well as his plans for the future, which include centering gothic literature and Hong Kong as a setting in his PhD.

How did you come to be at Monash?

When I was 16 I went to the Chinese University in Hong Kong (CUHK) to study. After two years I came to Monash on exchange and I decided that Monash was much more suitable for me and so I transferred. I did a Literary Studies major but I also did creative writing units with Professor Chandani Lokuge – I did her introduction to creative writing and her advanced fiction writing. I feel like she taught me how to write! And I did my Honours year in Literary Studies at Monash and my thesis topic was ‘Writing the Self in the Gothic Autobiography'.

What did your Honours thesis explore?

Since secondary school, I’d wanted to study Henry James’s The Turn of the Screw. And so I studied the way in which the narrative is transmitted in the text as well as in my favourite novel, James Hogg’s The Private Memoirs and Confessions of a Justified Sinner.  I looked at how life-writing and autobiographical elements in these two texts allow us to uncover more about the self and desire.

This exploration of self and desire seems linked to the entry you won an award for in the international Undergraduate Awards last year. Can you tell us a bit more about that?

I was studying a bit of digital narratology, like in video games. And for one of the research workshops in Honours, I studied sexual and gender identities in video games. I’m getting this work published in a journal, and it was a version of this that I submitted and received an Undergraduate Award for.

Interesting. Are you continuing an exploration of these identities in your PhD in creative writing?

Yes! That’s what I’m doing right now. I'm really interested in 19th or 20th century literature. I really love gothic literature. I think it destabilises a lot of binaries. I have a particular interest in critical theories as well.

I also want to experiment with narrative as well, and play with how the story is told. I'm influenced by Jeanette Winterson's ‘Written on the body'; her mode of narration was very inspiring. In Winterson's novel, you never really know if the narrator is male or female whereas typically we find that's a given in a story, that you know the gender of the protagonist. Very basically, we like to know what ‘sex' he or she or they are, but she deprives us of that and I think that's quite new and that's something I want to play around with. And, also, I want to explore psychological disassociation as well. In gothic work, like in Edgar Allan Poe's short stories, we have the unreliable narrator, and that's something I want to play around with as well.

So I'm going to write a gothic novel set in Hong Kong. I really want to return home with my writing. I wanted to do an Asian/Hong Kong gothic work. There's not much of that already and is an area worth developing. I would say mainly I want the work to be about identity, especially identities that are often suppressed in Hong Kong – marginalised communities. ‘The Beggar and the Glimpse’ gives us a glimpse of that return home with your writing. Can you share with us a bit about that?

The story was based on what happened in Hong Kong in 2016. Basically, during Chinese New Year in 2016 there were riots in HK and it was very violent. I thought I was looking at something from a war region but kept realising it was from my home. I was really emotionally affected and I wanted to express something. So I decided to write this story. I wrote it really quickly compared to my other short stories, like in 1 or 2 weeks.

This story is very different from my normal style. Usually, I like to write romance fiction, especially romance that doesn't deal with normative relationships, but this is the first time I've attempted political fiction. It's a new region to me.

It seems to tackle different issues between the generations in Hong Kong that were brought up during the umbrella protests there last year. Can you tell us a bit more about this?

I definitely wanted to explore the generation gap, as we have a stereotypical notion that the older generation is more conservative and I guess you can see this in Brexit, where the newer generation want to branch out. We have that in Hong Kong as well – people who are pro-establishment and anti-establishment.

Mistrust seems to be a cornerstone in this short story, linked to the story’s title and ending, where a boy giving money to a beggar glimpses at an older couple then is charged with a confrontation of mistrust from them. Why was this so important to convey?

I thought was important was that the older couple couldn't trust the younger boy, even though the younger boy didn't do anything at all. And I feel like years ago, this moment in the story might not have happened. When you see someone giving money or being charitable it’s read as an admirable trait but now there’s that distrust. I think it’s significant because when you look at someone doing something and you already have this interpretation or predetermined notion of them because of all of the politics going on, we can no longer believe in the good in people any more. The colour red comes up a lot as well, can you share with us what that means?

Red in Chinese culture is important for many reasons. For one, red is used to scare off monsters in mythical legends. So red is an important colour but in a different society, red is blood, it's bloodshed, it's violence, it's love, it's a very strong and passionate colour. So mixing traditional values with the depiction of violence we get red because it's blood and it’s Chinese New Year at the same time. I wanted to incorporate that.

What about your ideas behind weaving in food and Cantonese, the language of Hong Kong?

I think this is another part where I tried to experiment with the story. I showed this short story to some of my relatives who understand Cantonese. They look at these words and they understand, but to a different audience they might see it and feel distant from what I'm trying to say because of these foreign words in italics. So what I wanted to do was instill a sort of curiosity so that maybe they would investigate further into the politics of Hong Kong – which I really hope people will do.

Read ‘The Beggar and the Glimpse’, available in Verge 2016.