2017 was a year rich in events at the Monash University’s Mykola Zerov Centre for Ukrainian Studies.

In July, Dr Alessandro Achilli, a specialist in Ukrainian literature of the 20th Century, was appointed Lecturer in Ukrainian Studies. Dr Achilli received his PhD from the University of Milan in 2015 and in that year also held the Eugene and Daymel Shklar Research Fellowship in Ukrainian Studies at the Harvard Ukrainian Research Institute. Dr Achilli’s dissertation and several of his publications concern the poetry of the Ukrainian dissident poet Vasyl’ Stus (1938-1985).

Dr Achilli has quickly shouldered the duties of his position, taking on his share of the teaching in the undergraduate program of studies in Ukrainian language and culture, successfully applying for a number of the University’s internal research grants and building his international research profile. He made a number of contributions to the program of the Convention of ASEEES, the Association for Slavic, East European and Eurasian Studies (Chicago, 9-12 November 2017), delivering the paper “Perpetual Transgression: Ukrainian Poetry 1900-1940” and acting as chair and discussant for the panel “Re-thinking Galicia: the Territory of Transition and Transgression.” ASEEES is generally recognised as the world’s foremost forum for Slavic and East European Studies.

Also in July Dmytro Yesypenko, Candidate of Philological Sciences, a researcher at the Taras Shevchenko Institute of Ukrainian Literature of the National Academy of Sciences of Ukraine, commenced his one-year tenure as Monash Rudewych Postdoctoral Fellow in Ukrainian Studies.

The Fellowship, which was filled on the basis of an international advertisement, is one of the positions created in fulfilment of the conditions of the $1.42 million gift of Mr Victor Rudewych OAM and Ms Maria Rudewych to the Ukrainian Studies Support Fund in 2014.

Mr Yesypenko’s research interests lie in editorial and textual studies. He has dedicated many publications, as well as his Candidate’s thesis, to the work of the Ukrainian writer Borys Hrinchenko (1863-1910). His work in Australia concerns the potential of digital editions to enrich the study of Ukrainian literary classics, while facilitating access to them by specialists as well as general readers. In consultation with Professor Pavlyshyn, Mr Yesypenko is preparing several publications in English, utilising material previously gathered in Ukraine as well as stimuli from readings and meetings in Australia. The first such article, titled “Printed and Digital Wor(l)ds: Retrospectives and Perspectives of Scholarly Editing in Slavic Countries,” is to be submitted to the scholarly journal Book History, a publication of Johns Hopkins University Press (Baltimore, Maryland, USA).

Two PhD scholarships have been funded through the benefaction of Victor and Maria Rudewych. Both Monash Rudewych PhD Scholars in Ukrainian Studies commenced their candidatures in 2016. Both successfully successfully demonstrated the satisfactory progress of their research projects at their PhD confirmation seminars in 2017, Mr Denys Shestopalets in March and Ms Olha Shmihelska in May.

Mr Shestopalets, a Candidate of Historical Sciences and a researcher at the Department of Religious Studies of the Hryhorii Savych Skovoroda Institute of Philosophy of the National Academy of Sciences of Ukraine, is writing a PhD dissertation titled “Public Religions and Politics in Ukraine, 1991-2015: The Discursive Aspect.” His PhD supervisors are Professor Gary Bouma, an authority on the sociology of religion, and Professor Marko Pavlyshyn.

Mr Shestopalets has reported on aspects of his research at conferences of AASR, the Australian Association for the Study of Religion. At the next such conference, dedicated to the topic of “Religious Diversity in a Changing World” (University of Notre Dame, Sydney, 7-8 December 2017), he is scheduled to deliver a paper titled “Public Religions in Ukraine after the Euromaidan: Orthodox Churches, the State, and the Russian-Ukrainian Crisis.”

Ms Olha Shmihelska, who holds a Masters degree in Civil Law from Ivan Franko National University in Lviv, was a presenter at the annual TASA (The Australian Sociological Association) conference “Belonging in a Mobile World” (University of Western Australia, Perth, 28-30 November 2017). Ms Shmihelska’s paper, “Outlining Some Legal Conditions that Create Barriers for Ukrainian Migrants to Exercise Their Economic and Social Rights,” reported findings from her recent fieldwork in Melbourne and Berlin. 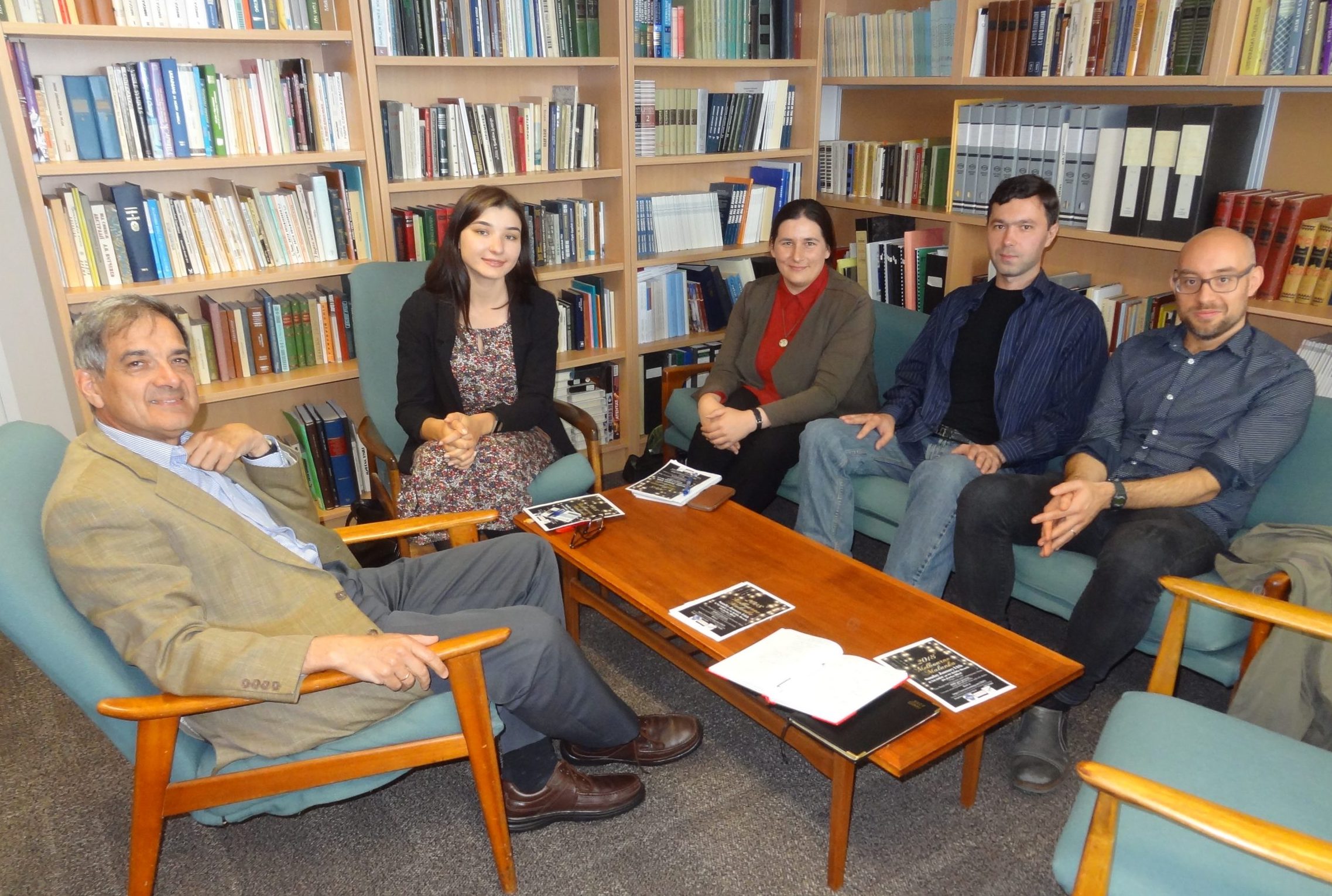 In July 2018, building on the presence at Monash of several Ukrainianists, the Mykola Zerov Centre for Ukrainian Studies will host an international conference, “Ukraine and the World: Culture, Politics, Society.” The conference will be held jointly with the Ukrainian Studies Association of Australia and New Zealand (USAANZ) and the Shevchenko Scientific Society in Australia.

With the intention of giving a talented early career scholar the opportunity to present his or her research to an international forum, the conference’s organising committee has invited applications for one conference scholarship covering travel to Melbourne and accommodation during the conference.

The conference will provide a venue for the launch of an important collection of scholarly essays, Ukraine and Europe: Cultural Encounters and Negotiations (Toronto: University of Toronto Press, 2017). The editors of the volume are Professors Giovanna Brogi, Marko Pavlyshyn and Serhii Plokhii (Harvard University).

The organising committee welcomes expressions of interest by organisations, businesses and individuals interested in becoming sponsors of the conference.

Student interest in commencing the study of Ukrainian language and culture was relatively strong in 2017. Fourteen students, more than in any preceding year, enrolled in introductory Ukrainian in the first semester. The group is diverse, only a few having a Ukrainian family background. Attracting students with previous knowledge of Ukrainian, whether former students of Ukrainian Saturday schools or native speakers of Ukrainian, continues to be a challenge.

Dr Achilli and Professor Pavlyshyn actively monitor teaching innovations at Monash University with the view to applying them, where applicable, in Ukrainian language and culture pedagogy.

In June and July 2017 Monash students at the intermediate level again took part in the Summer School of Ukrainian Language and Culture at Ukrainian Catholic University in Lviv. This year’s participants were Masha Alouker, Lexi Hellard and Jordan Rozman. Participants each received travel support of $2000 from the Friends of the Encyclopedia of Ukraine fund, $1000 from the Ukrainian Studies Foundation in Australia, and $500 under Monash University’s Study Abroad provisions.

Every year since 2008, Victor and Maria Rudewych have sponsored generous scholarships, each of $2500, and encouragement awards of a value determined from year to year. These awards, administered by the Mykola Zerov Centre, have encouraged students to take Ukrainian language as a subject for the VCE, HSC or SACE examinations in Victoria, New South Wales and South Australia, respectively.

More recently, Victor and Maria Rudewych expanded the scope of their scholarship scheme to encompass pupils of Ukrainian Saturday Schools from Year 7 to Year 11. These scholarships are administered by the Ukrainian Council of Education in Australia. Successful applicants for the 2017 round will be announced in December.