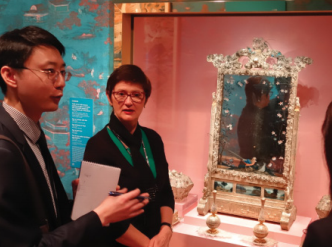 The Chin Communications Masters Scholarship recognises the importance of training translators and interpreters. The generous philanthropy of award-winning Chinese translation specialists Chin Communications established the scholarship in 2012 – the same year they celebrated their  20th anniversary.

“We wanted to do something significant to mark this”, said Kate Ritchie, Managing Director of Chin Communications. “We also wanted to give something back to the industry that helped us grow as a business. We’d had some Monash University practicum placement students and were impressed by how Monash went about its program. We also have a great relationship with the university, so we hit upon the idea of a scholarship to recognise the importance of qualifications and training, as well as quality, when it comes to translating.”

Awarded to international students undertaking the Master of Interpreting and Translation Studiesin the School of Languages Cultures and Linguistics in the Faculty of Arts, the scholarship also provides students with an internship at the Melbourne offices of Chin Communications.

“The team [at Chin Communications] fostered a friendly, dynamic, diversified and supportive working environment,” said Xuesong Zhang, recipient of the scholarship in 2015. “As a fresh starter, it helped me understand the nature of this profession.”

The ability to translate from Mandarin to English and back again, correctly, efficiently and quickly takes great skill. The importance of accurate interpreting is particularly vital in areas such as diplomacy.

“Just because you speak two languages doesn’t necessarily mean you can translate a complex court judgement,” said Ms Ritchie. “Translation is both a science and an art. It is essential in serious business negotiations, diplomacy, trade and healthcare – and there are real implications if you get things wrong. It is vital to have people who know what the role is and who have been well trained.

Some of the Chin Communications team are Monash graduates. “Marcus came to us before we started the scholarship and we were so impressed with him he became a full time employee. He was one of our team who provided the interpreting for the President of China towards the end of 2014. John Zhou, one of our senior interpreters and translators, is also a Monash graduate. He recently interpreted for Prime Minister Malcolm Turnbull and New Zealand Prime Minister John Key.

“We want to keep the industry going”, says Ms Ritchie. ”And Monash train students at a high level. Considering some of our team are Monash graduates, offering this scholarship has been a  very rewarding thing to do.”

This article first appeared in Monash University’s ‘thanks’ magazine, 2016 edition.

Mid-year applications will open for a select group of scholarships on 22 May 2017 – view more information and application details here.

LLCL only School of Languages Literatures Cultures and Linguistics Linguistics