Get yer hand off it, mate, Australian slang is not dying 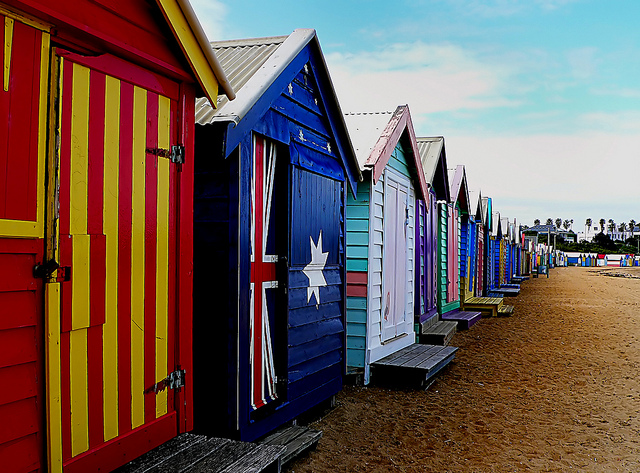 By Kate Burridge and Howard Manns, from the School of Languages, Literatures, Cultures & Linguistics.

As the debate continues over whether Australia Day should be celebrated on January 26, this series looks at the politics of some unresolved issues swirling around Australia Day – namely, the republic and reconciliation. And just for good measure, we’ll check the health of Australian slang along the way.

The Australian attachment to slanguage (slang language) goes back to the earliest settlements of English speakers in Australia. As Edward Gibbon Wakefield noted in his 1829 Letter from Sydney:

The base language of English thieves is becoming the established language of the colony … No doubt [terms of slang and flash] will be reckoned quite parliamentary, as soon as we obtain a parliament.

Wakefield’s observation was spot-on. The cant of the underworld (so-called “flash” or “kiddy” language) flourished in these early days. Slang had become an important way of fitting in and avoiding the label “stranger” (or “new chum”) – and, as linguist Evan Kidd confirms, it still is.

Yet, every few years there’s a furphy that our beloved “Strine” slang is doing a Harold Holt.

Reports of the death of slang downunder are total bulldust

Early in 2017, the Australian pie company Four’N Twenty expressed its concern that Australians hadn’t been “slinging slang” enough, and so launched its “Save Our Slang” campaign, aimed at promoting some 70 you-beaut, dinky-di, true-blue Aussie-isms (bloke, bogan, grouse, straya, you bewdy, and so on).

A few years earlier, in 2014, the appearance of Tony Thorne’s Dictionary of Contemporary Slang sparked a series of articles heralding the end of the golden era of Australian slang, prompted by the fact that the work had added only three new (not terribly usual, to our mind) Australian terms: tockley “penis”, ort “buttocks” and unit “bogan”).

We commonly pin the blame for the death of Aussie slang on our anklebiters-cum-adolescents and their love of seppo (short for “septic tank”, rhyming slang for Yank) slang. But it’s worth noting seppo influence has been a lexical and moral concern at least since the introduction of American “talkies” in the 1920s, as documented by historian Joy Damousi:

… that influx of nauseous American slang and vile English which regularly appears upon the screen, and threatens to reduce the Australian vernacular to the level of the New York gutter-snipe.

It’s also worth noting that some of what we consider to be true-blue slang in fact finds its origins in – hold onto your Akubra – early contact with American English.

There was an influx of Americans to the goldfields from the 1850s, and they brought with them a bunch of American colloquialisms. These included bonza/bonzer, which is probably from American English bonanza (originally from Spanish and used in the US in the 1840s for a successful gold mine).

Even waltzing – “carrying” – is probably from American slang, or at least was used at the same time and in the same way. Sure, we have records of Australians “waltzing Matilda” in 1890, but Tom Sawyer and Huck Finn were “waltzing” with this same meaning (albeit sans Matilda) in 1884.

Some align the disappearance of Aussie slang with Australia’s maturing as a nation.

Certainly words, more than other aspects of language, are linked to life and culture, and perhaps the changes in Australian society are such that the days of the chiacking larrikin (or cheeky lovable prankster) have passed?

But it is the nature of slang that there will always be a turnover of terms – today’s cobber is tomorrow’s mate, ranga for a redhead replaces blue/bluey, bogan replaces ocker and so on.

As American writer Gelett Burgess put it in his 1902 essay, In Defence of Slang:

Like the eggs of the codfish, one survives and matures, while a million perish.

An expression that fills a need becomes accepted but, as Burgess describes:

… it is a frothy compound, and the bubbles break when the necessity of the hour is past, so that much of it is evanescent.

His own brilliant creation blurb for “a short publicity notice” was clearly one of the eggs that survived – and thrived.

We are continuing to sling slang

It seems we get so obsessed with the death of Australian English that we miss those many great terms that are being created beneath our very eyes in Australia and by Australians. Just look at the slew of recent additions to the Australian National Dictionary (most stemming from the 1980s and 90s):

The rhyming hoon is another great example of how language is always on the move. It’s attested as a noun in 1938 (“lout”, “exhibitionist”), but with the shift to “young hooligan, especially as a driver” in the late 80s, we see a rich proliferation of changes, including hoon as a verb (1988), and nouns denoting the act of being a hoon, including hoonery (1987), hoonishness (1993), hoondom (1998) and their weapon of choice, the hoonmobile (1994), with which they could be adjectives hooney or hoonish.

The other interesting thing about hoon is that it illustrates how one meaning can oust another. The driver sense of hoon has pushed out the pimp sense that existed alongside it from the 1950s to the turn of the century (a very rare case where a risqué meaning hasn’t won out).

So, slang continues to flourish. It’s also clear there’s no sign that we’re about to give up our shortenings – as seppo, firie and trackie daks attest, Australians still love abbreviations. And we are exporting them it seems.

Australian selfie was the Oxford Dictionaries “Word of the Year” for 2013 (the frequency of the word had increased by a whopping 17,000% since the previous year). Its success was astonishing – in the same year it was even crowned Dutch Word of the Year (no squeamishness about loanwords in the Netherlands).

But there are plenty of other success stories too: budgie, greenie, pollie, surfie, even mozzie are now also making appearances in global English, as are demo, preggo and muso. These join many other exports – no worries, like a rat up a drainpipe, to put the boot in, to rubbish (someone) to name a few.

Australia recently scored another global hit with Macquarie’s Word of the Year 2017, milkshake duck, “a person who is initially viewed positively by the media but is then discovered to have something questionable about them, which causes a sharp decline in their popularity”.

So, let’s not milkshake duck (verb) Australian slang by focusing too much on the past cultural cringe and underplaying the evolving nature of slang.

Catch up on others in the series here.