2019 proved a busy one at the Japanese Studies Centre; we welcomed back Dr. Alison Tokita as an adjunct researcher, as well as hearing from both local staff and guest speakers.

We were particular pleased to start out with a collaborative event, a public lecture by Prof Yasushiro Matsuda of Tokyo University, presented in cooperation with the Japanese Consulate General (for more info on this lecture, click here). We also heard from Dr. Lucien Brown (Monash University) who is doing comparative work on politeness in Japanese and Korean; later seminars included presentations by Dr. Tokita and our visiting scholar, Prof. Ayuu Ishida. Highlights of the year were the hosting of JSAA conference at the Caulfield campus in July, and the international symposia held in November.

Here are some pictorial highlights from the semester:

Dr. Lucien Brown from LLCL's Korean Program spoke at the JSC on his comparative work. Professor Carolyn Stevens welcomed the audience at the Public Lecture on 15 March 2019. Professor Matsuda was an entertaining and engaging lecturer! 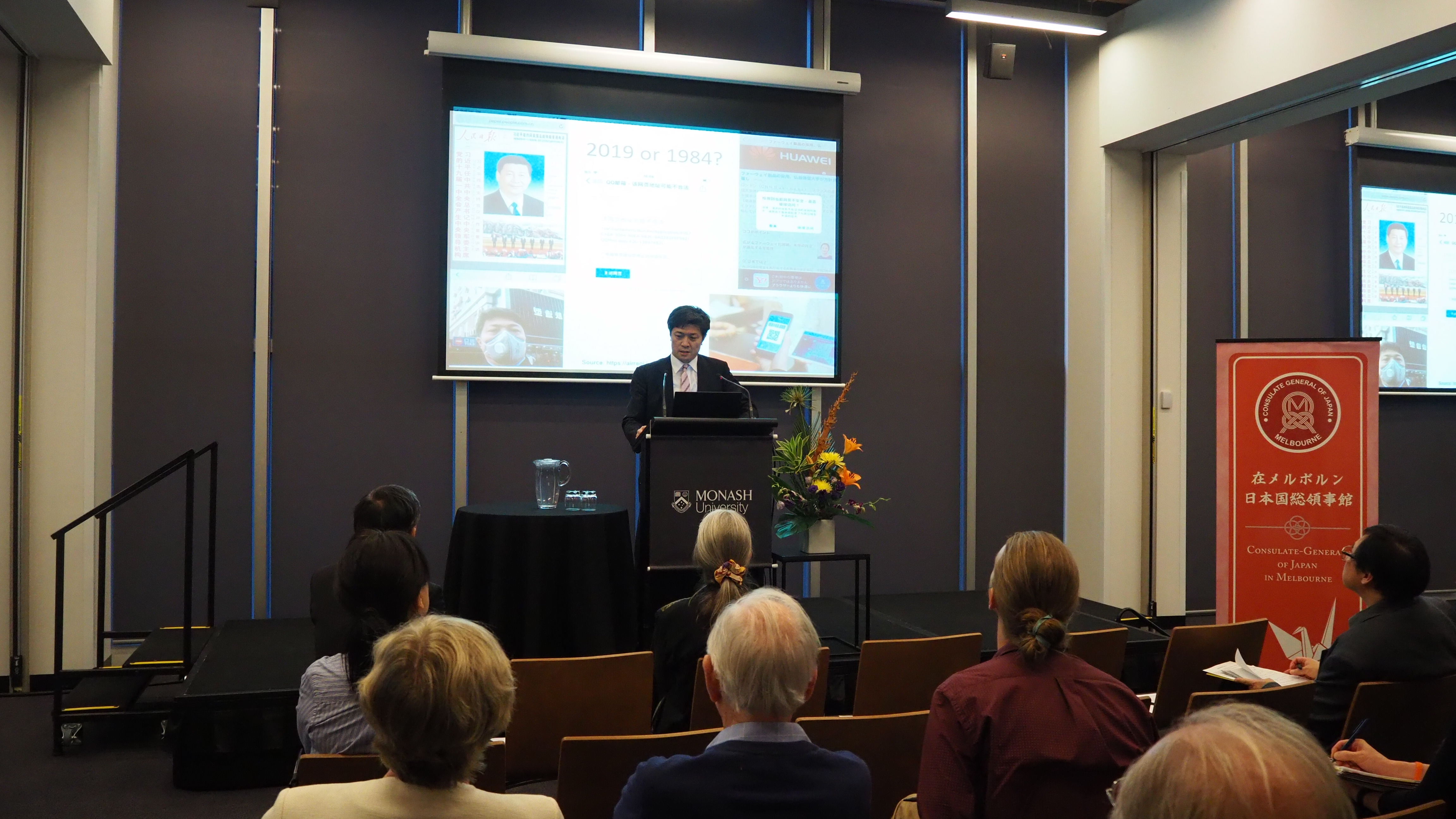 We were really happy to welcome back Dr. Alison Tokita in April after she had spent some years teaching and conducting research in Tokyo and Kyoto. Here she is pictured with a longtime supporter, Freda Freiberg, and new Japanese program lecturer, Iori Hamada. 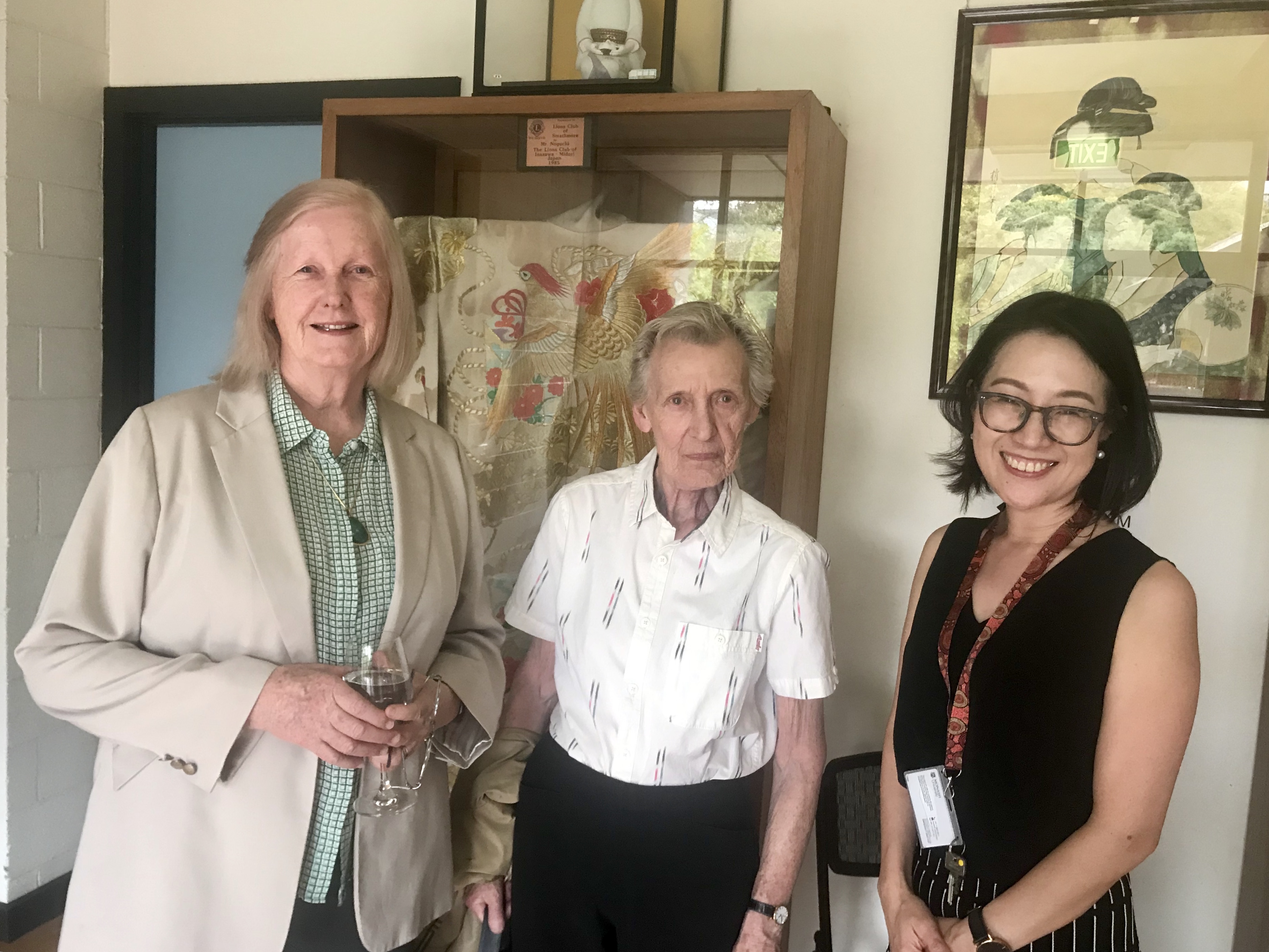 At Alison's seminar, the JSC community past and present really enjoyed the chance to catch up! On 29 May we heard from visiting researcher Professor Ayuu Ishida on her research on prewar Japanese cosmetic companies and the media. 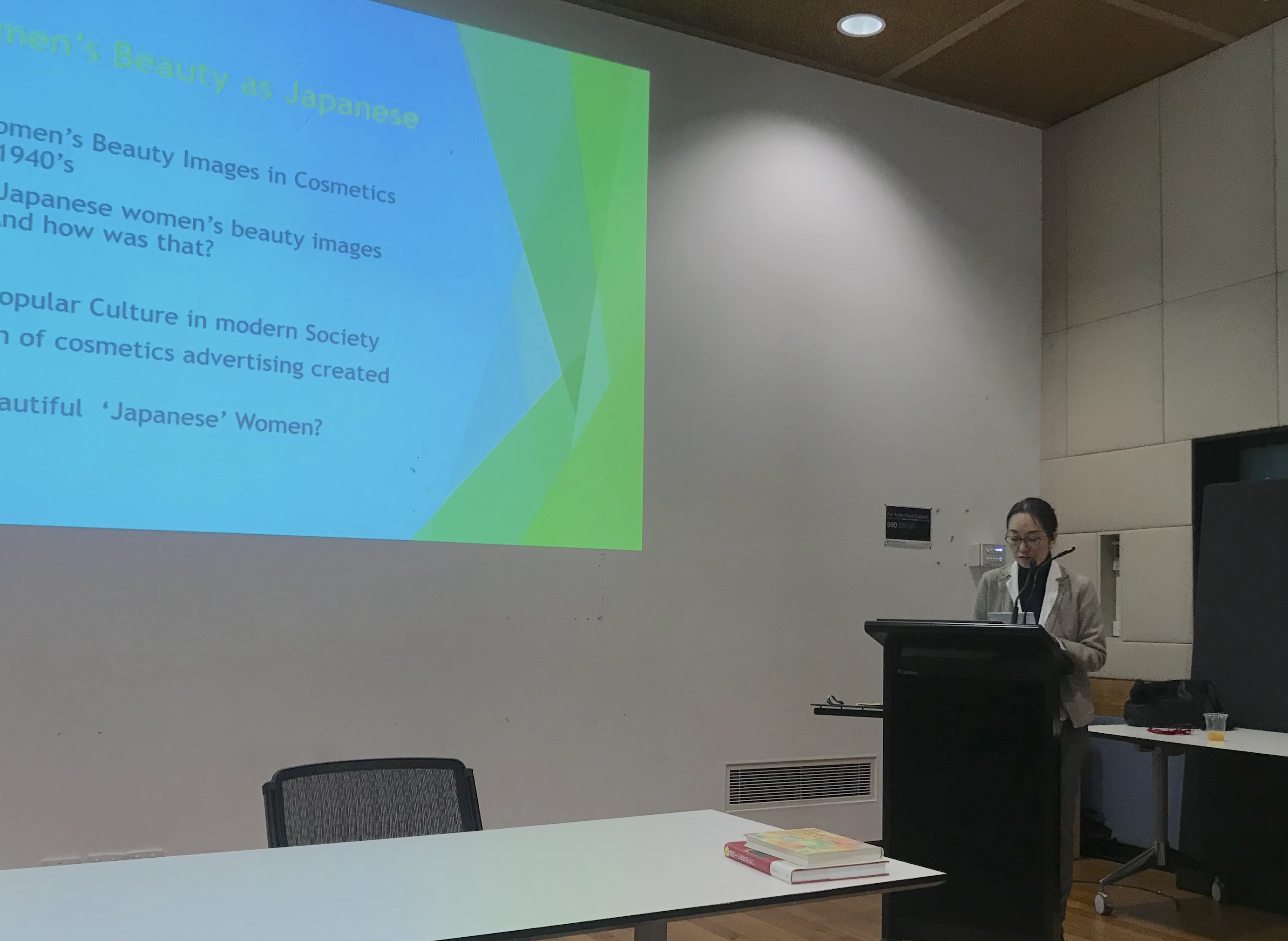 From July 1-4, the Japanese program assisted in hosting the Japanese Studies Association of Australia Biennial Conference. Above is Dr. Satoshi Nambu, co convenor of the conference, speaking during the postgraduate workshop. To the left is Dr. Mark Pendleton, University of Sheffield (UK) who also presented during the pg workshop.

On the first day of the conference, A/Prof Adam Clulow of SOPHIS and a JSC supporter organised a great panel on Tokugawa maritime history. On the final day of the conference we hosted an editors' roundtable which was informative and supportive to ECRs. On 31 July we hosted Professor Tomoko Ichitani from Seinan Gakuin University, who spoke on her work translating Australian literature into Japanese. What a delight it was for her to meet Dr. Mridula Chakraborty from Monash, and discover they are both working to translate the same piece into Japanese and Hindi (respectively)! 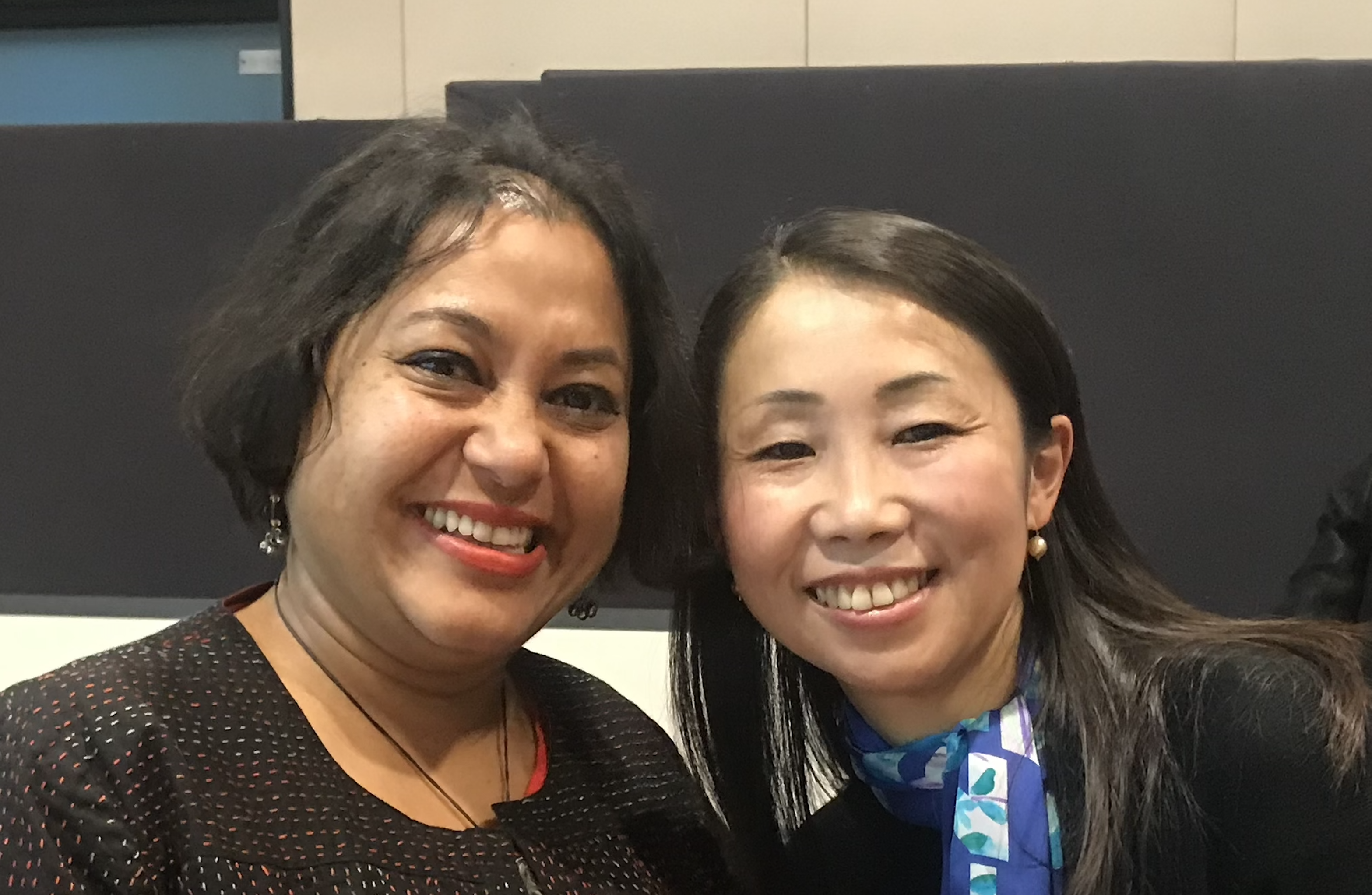 Semester 2 kicked off with a seminar by Dr. Iori Hamada, who is our newest member of the JSC! 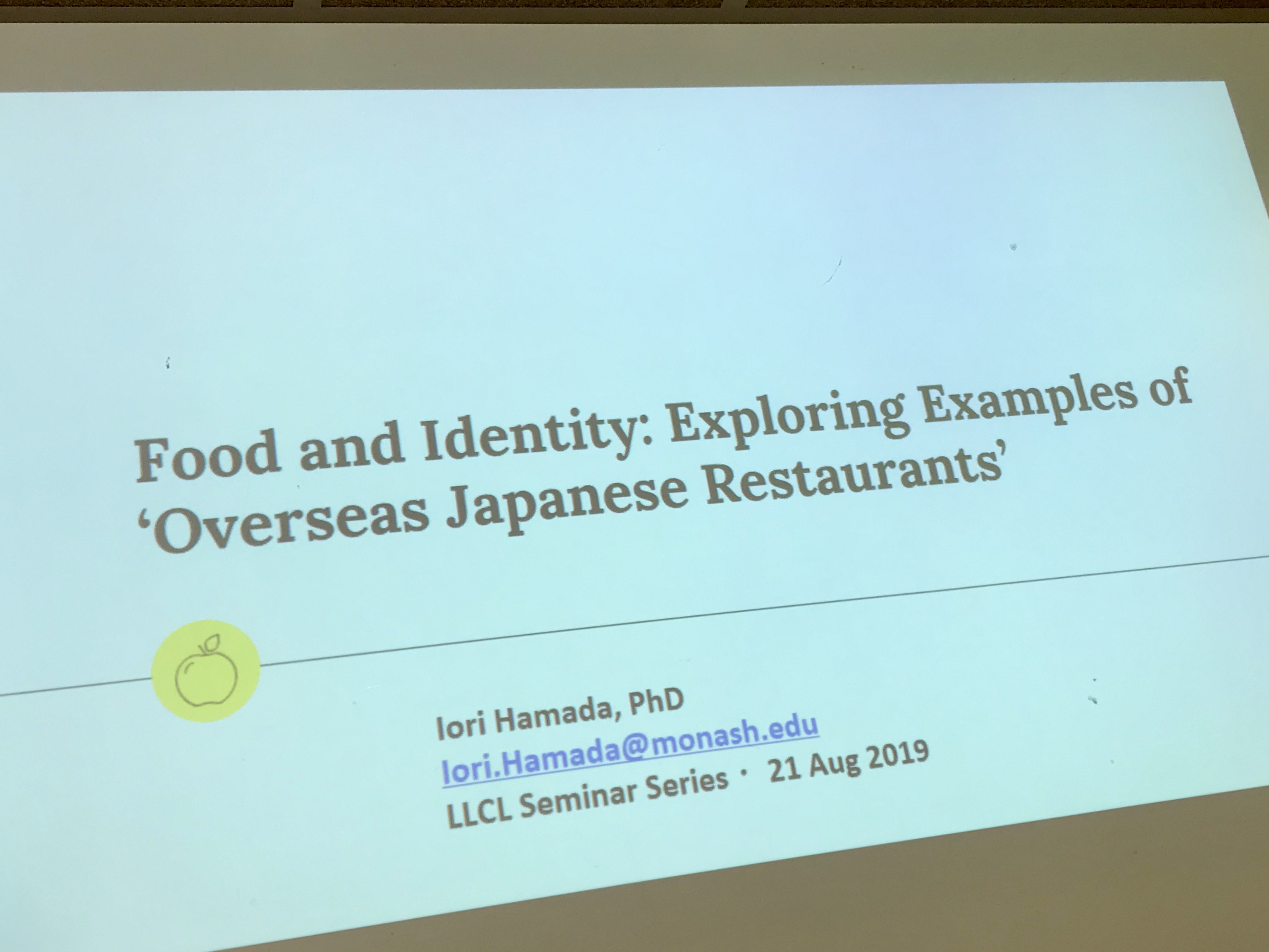 On 23 October 2019, the JSC hosted a workshop on Meritocracy, education reform and the concept of 'talent' in postwar West, which explored how notions of 'talent' were operationalised in education reform in postwar West Germany and Japan. It traces the development of selection mechanisms based on the discovery and measurement of talent, which in both countries held out the promise of fundamental social transformation while at the same time facilitating the entrenchment of pre-existing social and political orders. The seminar is part of a larger study of how meritocratic ideas fostered political legitimacy and social cohesion in democratic societies after World War II. 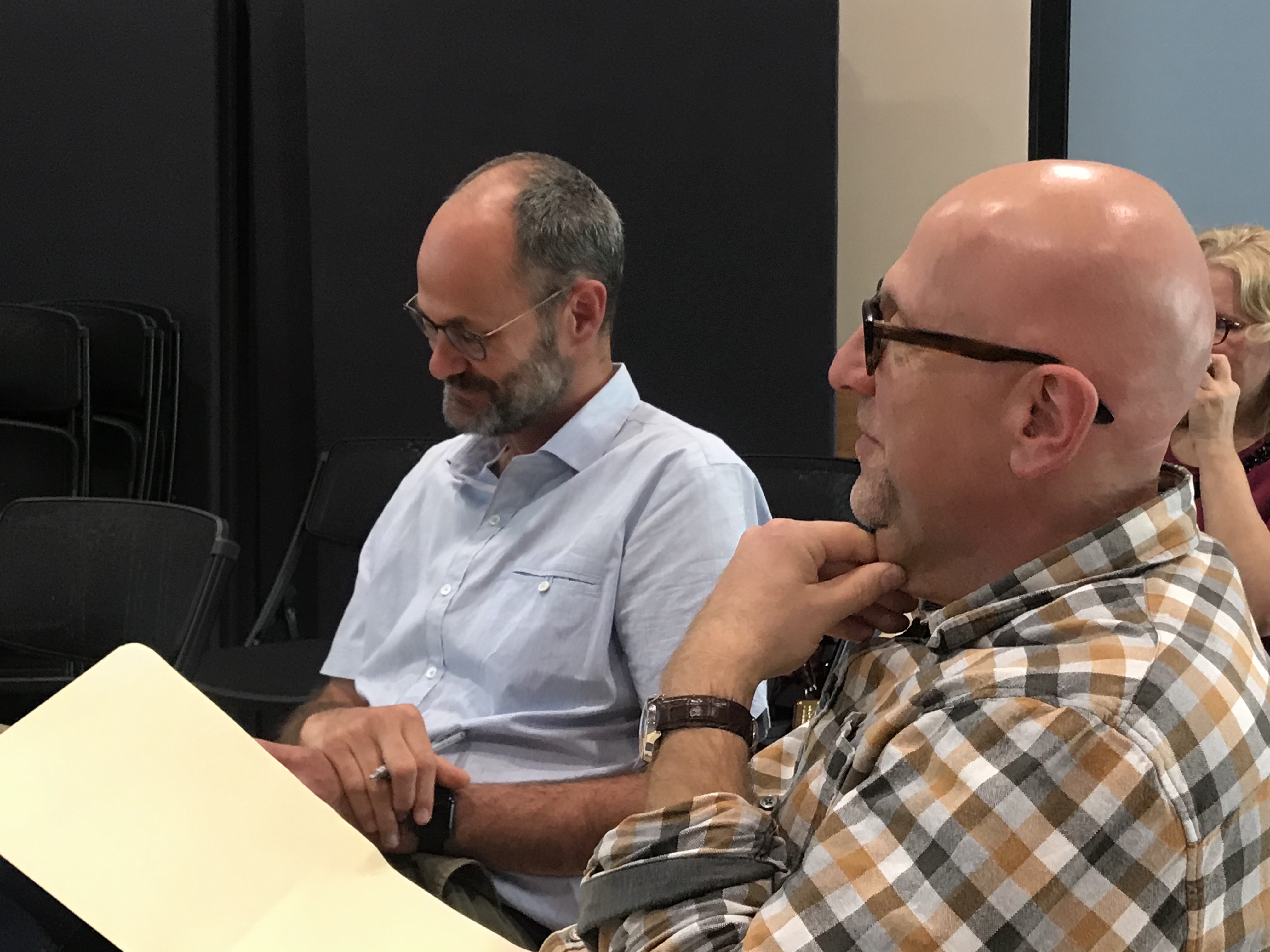 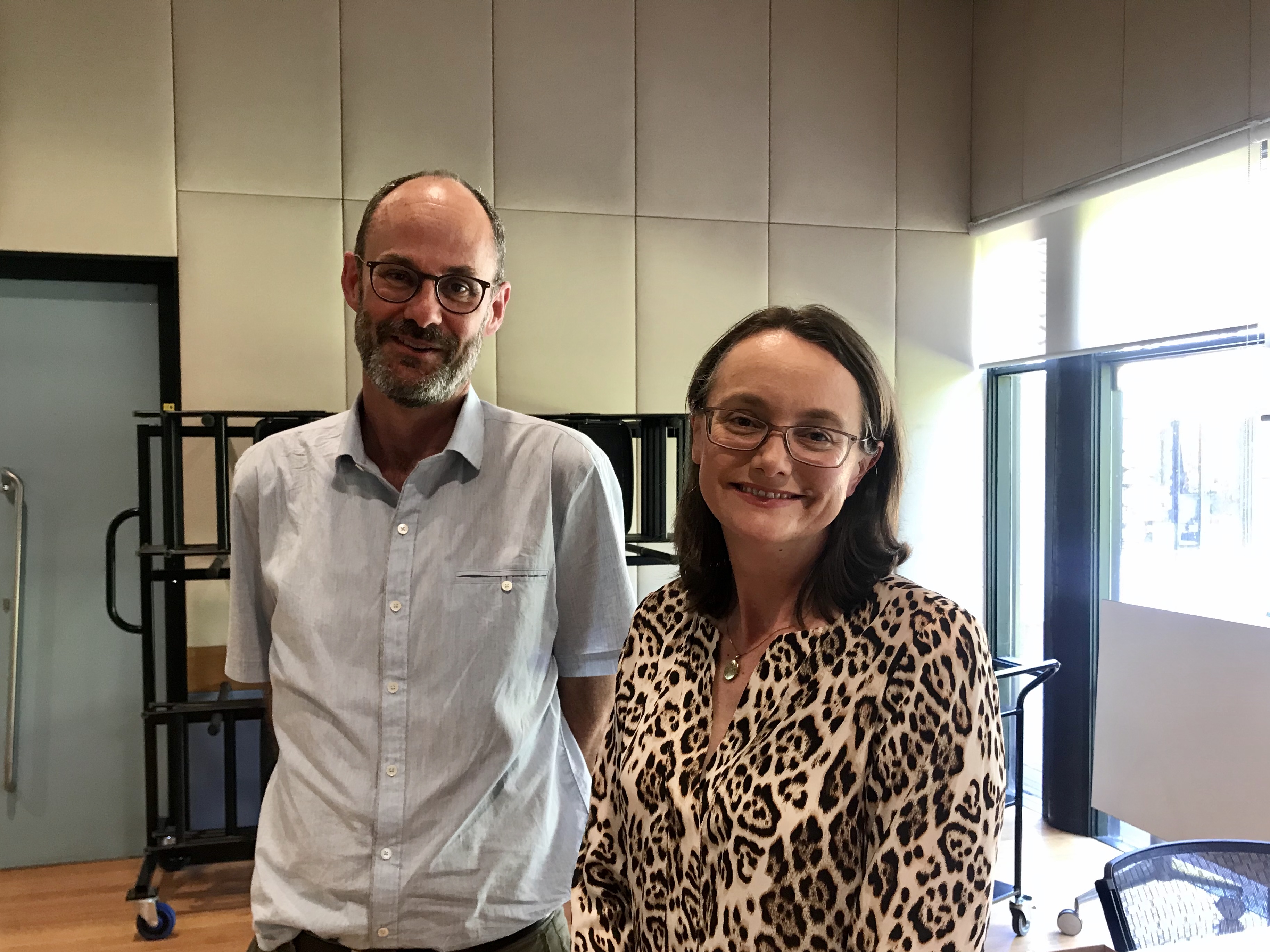 On 9th August 1945, the US dropped the second atomic bomb on Nagasaki. Of the dead, approximately 8500 were Catholic Christians, representing over sixty percent of the community. In this collective biography, nine Catholic survivors share personal and compelling stories about the aftermath of the bomb and their lives since that day. 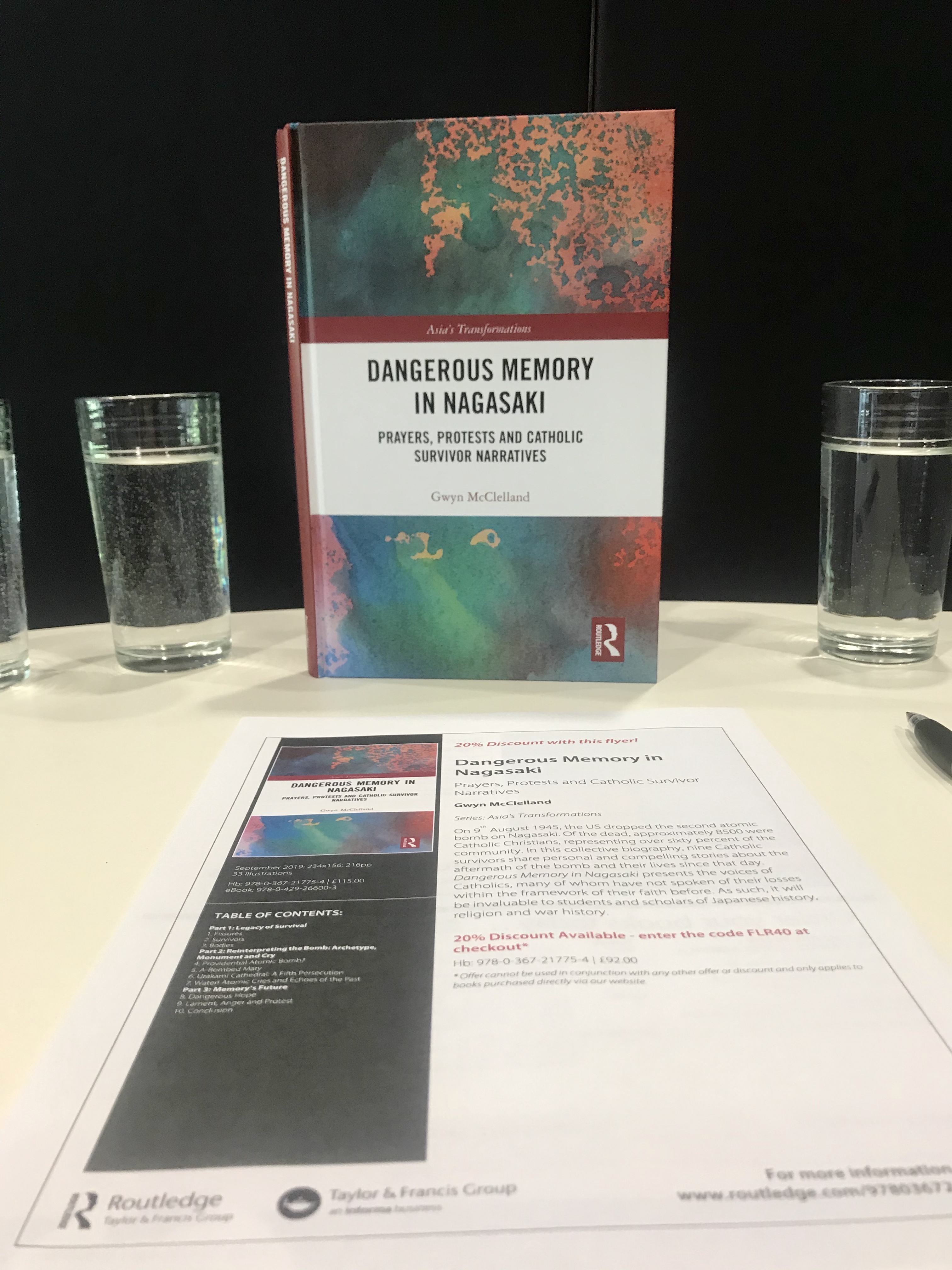 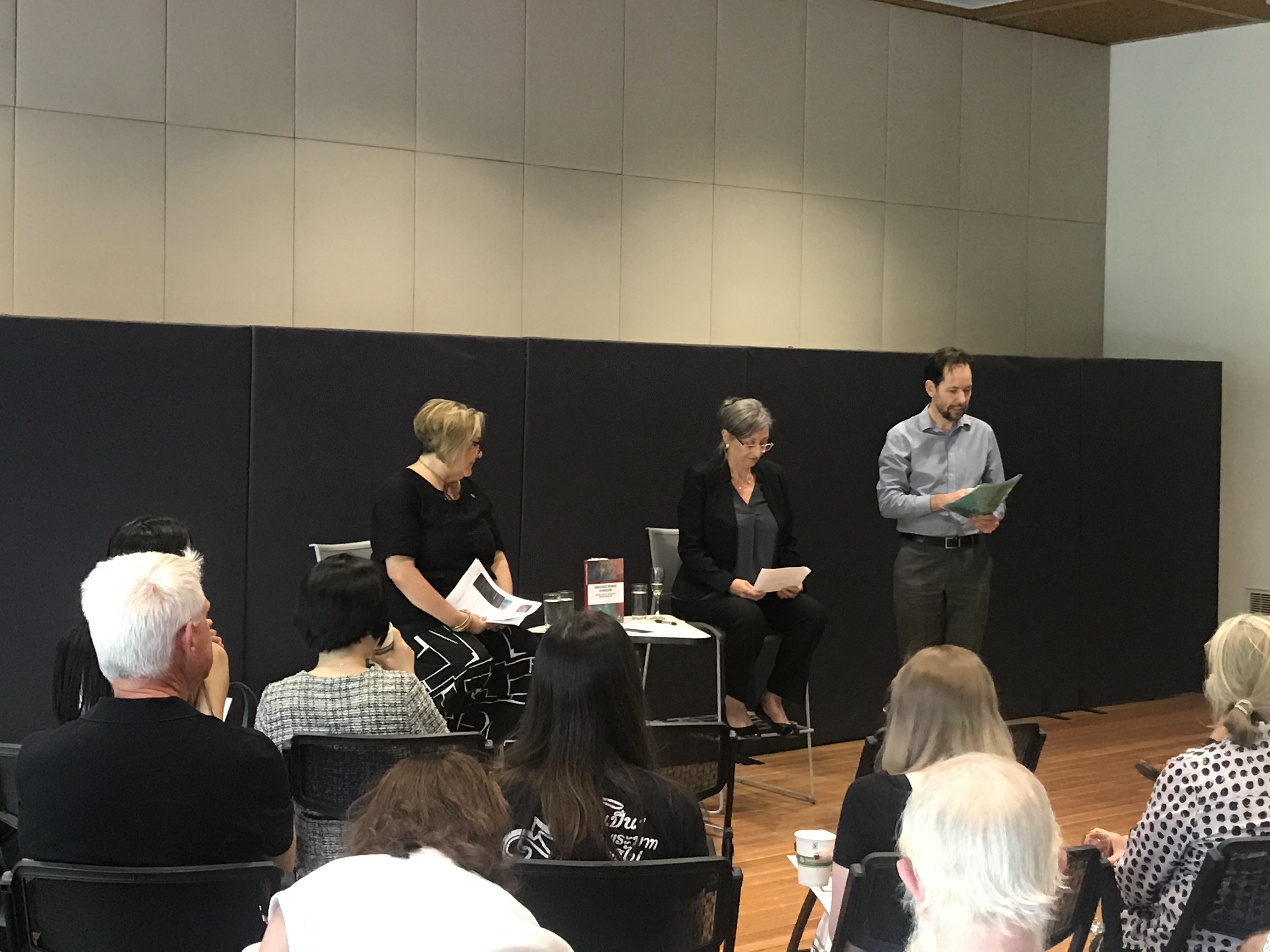 An International Symposium sponsored by the Japan Foundation

On 4 November 2019 the JSC held a major event on discussion 2019 as a highly significant year for Japan, marking the beginning of the Reiwa era, and offering a new definition of the “postwar”. The Heisei Emperor Akihito on April 30 abdicated in favour of his son Crown Prince Naruhito, who formally succeeded as Emperor on May 1. He will be formally enthroned as Emperor in November. This changeover opens the possibility for change in the role of the Emperor, change within Japanese society, and change for Japan’s international relations. It also brings into focus the gendered nature of succession, bypassing the only child of the Emperor, Princess Aiko. 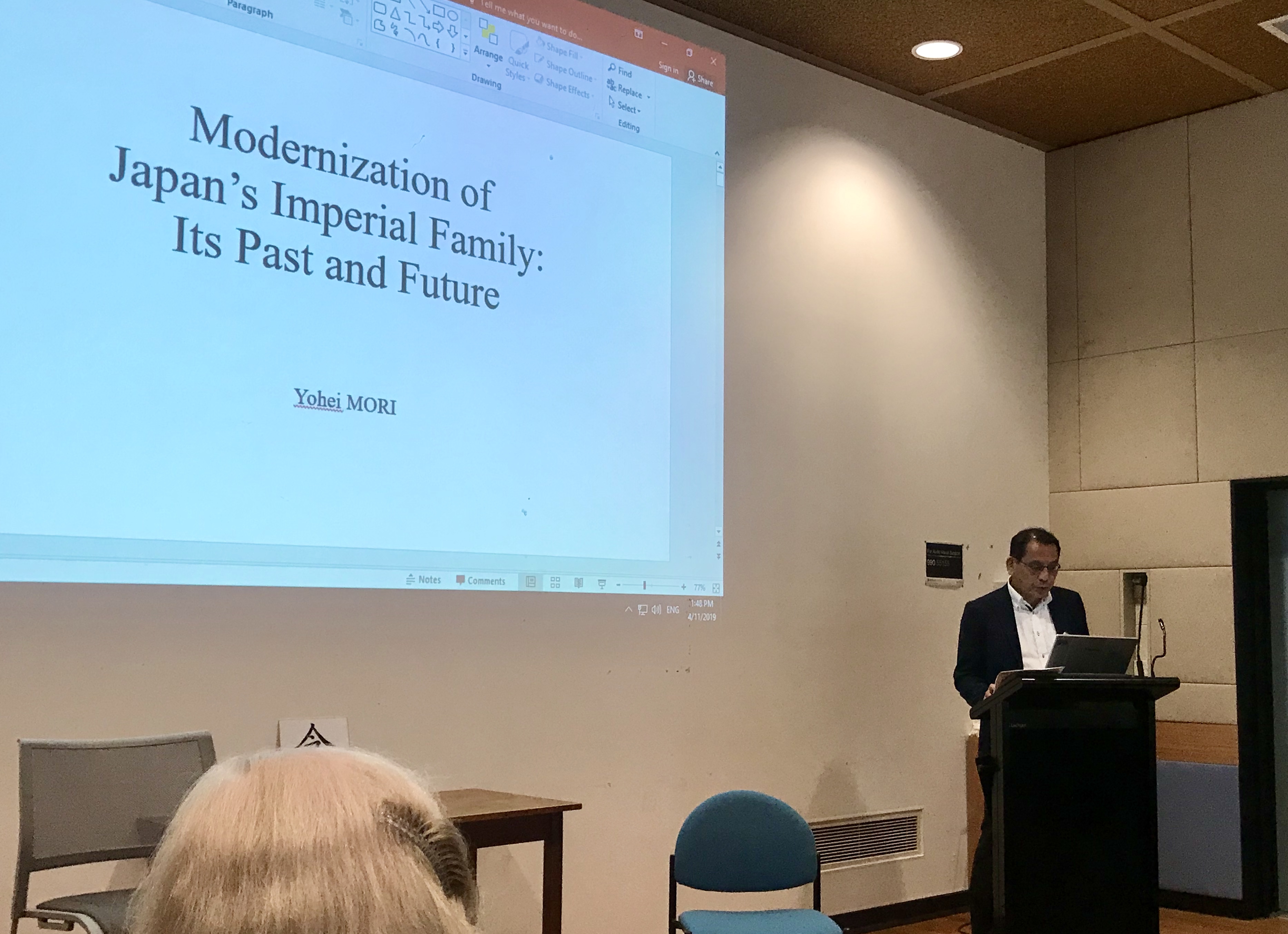 participants were well catered for thanks to the support of the JF! The final event of 2019 was an international half day symposium, entitled Tokyo: Past and Present—Towards a “People’s History” of the City, convened by Focus Professor Daniel Botsman.

For more than 400 years Tokyo has been one of the world’s greatest urban centres, but for visitors and residents alike the cumulative effects of successive waves of redevelopment can make it hard to detect the traces of this long and rich history. Two of Japan’s leading social historians, and an international panel of scholars discussed their new project aimed at producing a bilingual “People’s History of Tokyo” that will serve as a guide to the layers of human experience buried beneath the surface of today’s urban landscapes. As the city prepares to host the 2020 Summer Olympics, participants considered how specific areas of Tokyo have changed over the centuries and how they are again being re-made today, considering what it really means in the 21st century to write a “people’s history” of the city. 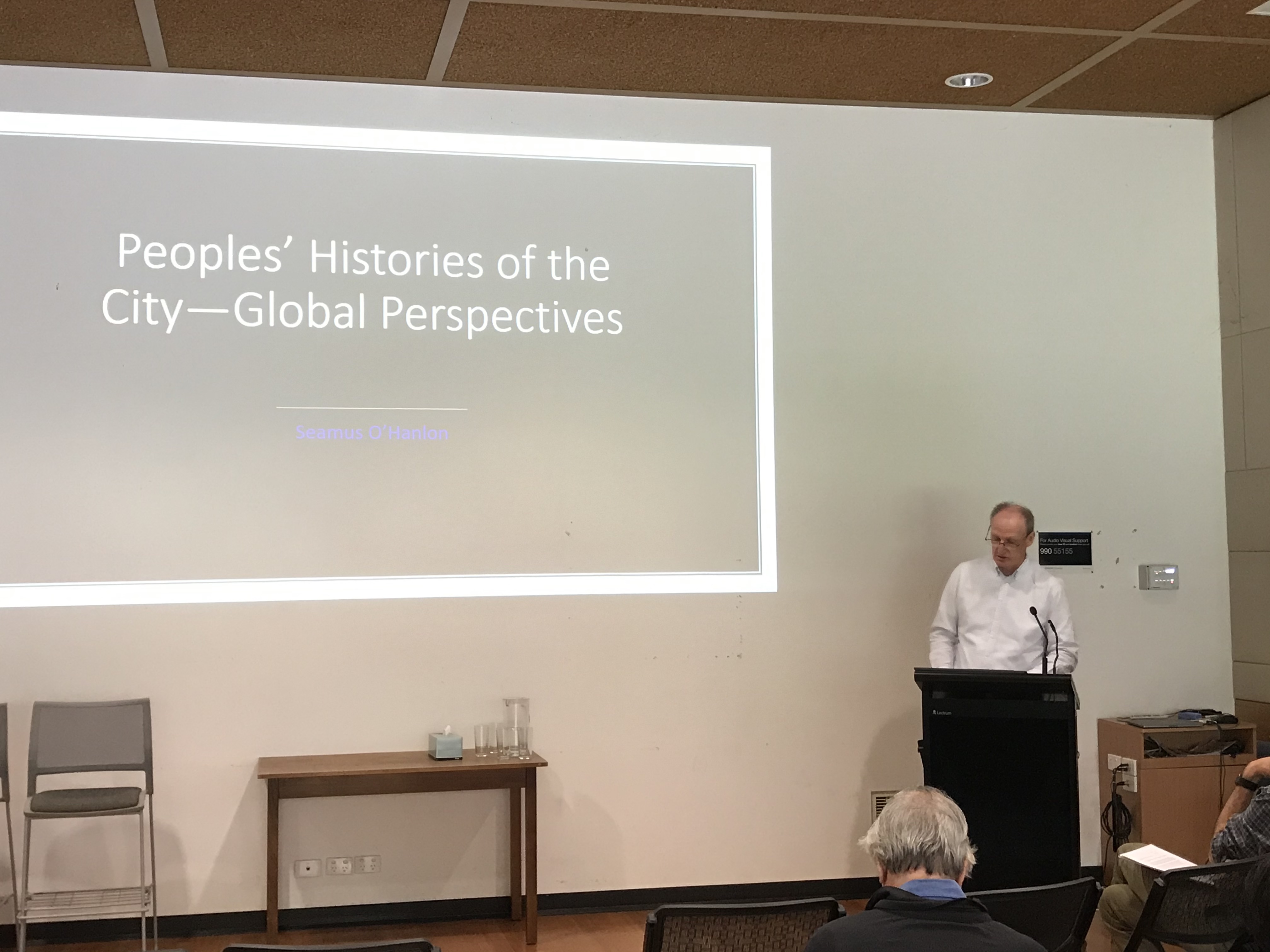 A/Professor O'Hanlon began the symposium with a discussion of urban histories around the world, including Melbourne. This presentation was followed by Professor Botsman's introduction of the collaborative project, the bilingual "People's History of Tokyo".