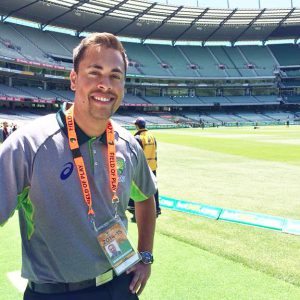 Aaron shares his views on his journey from Monash journalism to his impressive role at Cricket Australia.

Q: How do you feel about your new appointment at Cricket Australia?

A: I am extremely humbled that an organisation I idolised as a child now have me working. It’s great to be able to live and breathe sport for a living, especially Australia’s favourite sport! One day I’ll be rubbing shoulders with Michael Slater in the media box and the next I’ll be interviewing Greg Chappell, it’s surreal.

Q: How has Monash helped prepare you for the role?A: It was always a goal for me to get into Monash’s journalism program and it didn’t disappoint. I received the best advice from people who had previously thrived in the business and the avenues that opened up because I was a Monash student were plentiful. I don’t think I’d be in the role I am now without my experience at Monash. Best decision I ever made.

Q: What is the importance of practical experience?A: This is something that needs to be stressed … go out and get experience! It’s cliché but true – it’s never too late and you can never get enough. I did placements at the Box Hill Hawks, the Herald Sun and Metro Media to name a few, and I maintained a part-time job at Network Ten. These not only allow you the chance to refine your skills but also to make connections you will no doubt need.

Q: Any advice for journalism students?A: Entering journalism is daunting, but if you really want it, and you work hard enough, doors will open up.