Monash alumni have won six Quills and scored two high commendations for journalism excellence in the 2021 Quill Awards in Melbourne on March 18. 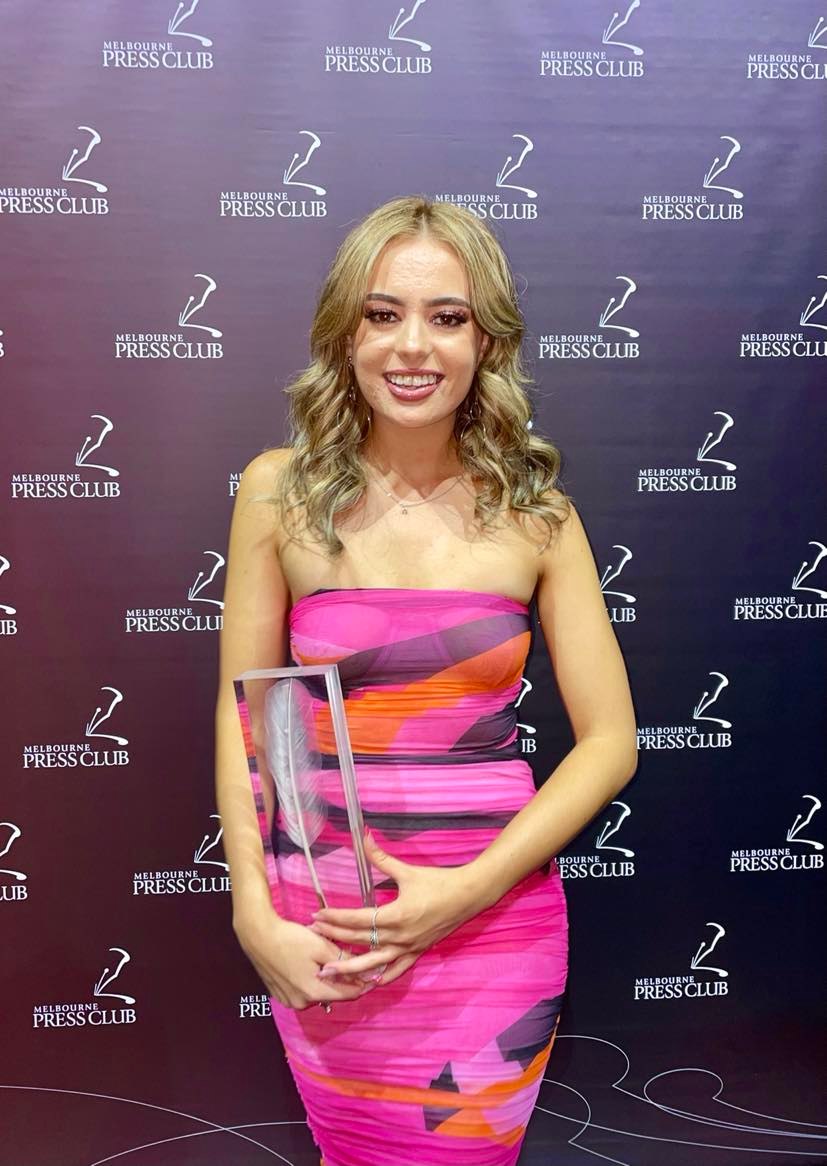 Olivia, who is now the Herald Sun’s education reporter, has covered the coronavirus pandemic, including the anti-vaccination protests at Fawkner Park.

Police arrested Olivia and a Herald Sun photographer during the protests. Police later apologised for detaining them.

“I wouldn’t have imagined that my internship from just three years ago would allow me to stay on board at the Herald Sun newspaper and give me the privilege to tell people’s stories like I’ve been so lucky to do over the past couple of years,” Olivia said.

“Without Monash’s journalism internship program, I would have never met the Herald Sun team that I am now fortunate and privileged enough to call my colleagues.”

Master of Journalism recent graduate Ruth Brook scored a high commendation in the competitive Student Journalist of the Year award.

Ruth directed a MOJO News documentary, May the end be beautiful, which traces the steps of a young man who was born in a Kenyan refugee camp.

“It is such an honour to have received this high commendation and I would not have been able to make it this far without the invaluable instruction, support and guidance from my lecturers at Monash University,” Ruth said.

“I felt incredibly supported while working on this project and throughout my degree as a whole.”

University of Melbourne’s Petra Stock won the Student Journalist of the Year for her feature on Australia’s adjustment to decimal currency and its gradual transition to a cashless society.

Matilda, who writes for Guardian Australia, has produced journalism that is clever, witty and entertaining. She tells the news with vigour and excitement.

The Class Act podcast explores the double life of a headmaster who faked his qualification to serve in Melbourne’s elite private schools. The six-part series featured in the Herald Sun’s newspaper and digital platforms.

Master of Communications and Media alumnus Konrad Marshall, a Good Weekend magazine writer, won the Sports Feature Quill for his piece on Olympic basketballer Patty Mills, All the right moves.

Konrad, who graduated from Monash’s media program in 2002, has won several Quills for his outstanding feature writing, which explores Australia’s characters in depth.

The Herald Sun team’s coverage of the pandemic set the agenda and contributed to Victoria’s management of COVID issues.

Luke was awarded $3000 for his exclusives on significant problems with the National Disability Insurance Scheme (NDIS).

The Age political journalist Sumeyya Ilanbey, who studied in the Master of Journalism program, won a high commendation with colleague Melissa Cunningham in the Reporting on Multicultural Affairs category.

Sumeyya and Melissa explored how the coronavirus closed in on the City of Hume.

Monash’s Head of Journalism Associate Professor Johan Lidberg said university staff were “incredibly proud of the achievements of its graduates”.

“The wins are also a credit to the staff in the School of Media, Film and Journalism at Monash. Their passion and dedication to quality journalism is a strongly contributing reason to why our students and graduates keep winning awards year after year.

“Congratulations to our brilliant students and graduates.”

Learn more about what study opportunities are available in the School of Media, Film and Journalism here.