As a response to the #AfricanGangs social media movement established to counter negative perceptions of African immigrants in Australia, academics from the Monash Population Migration and Social Inclusion Focus Program (PMSI) recently hosted the forum ‘#AfricanGangs: Beyond politics and media headlines’.

A platform for discussion and debate, the Monash #AfricanGangs Forum analysed the issues raised by the “African Gangs” panic, and workshopped solutions with the aim to begin changing the narrative surrounding migration and misrepresentations of African Australians in politics and the media. Held at the Immigration Museum as a part of their Cultural Diversity Week program, the forum brought together academics, practitioners and community members to engage in a series of four panel discussions on media, youth, diaspora and resilience.

Monash Associate Professor in Human Geography, Alan Gamlen, who initiated the forum, said that today people in liberal democracies have stopped talking to each other and that is creating more divided and conflict-prone societies that are susceptible to rule by ‘strong-man politics’.

“Many of the people at the forum came to Australia to escape societies like that,” said A/Professor Gamlen, a member of the PMSI Executive Committee.

“As academics we have a duty to help ensure that public debates are rigorous and civil, and that they respect facts and reason. There needs to be more forums like this, where the relevant decision makers and opinion shapers can talk these things through in that spirit of civility, ”said A/Professor Gamlen.

Associate Professor Rebecca Wickes, Program Leader of the PMSI Focus Program and member of the resilience panel at the forum, said it was critical to identify major concerns and difficulties as the African community has experienced significant backlash dating back to 2007, which was recently reignited after Moomba and the erroneous connection with the Apex gang.

“They have been experiencing hate crimes, bias in the workplace, in the educational system and bias in the neighborhood and it’s making a very difficult path for them as they attempt to settle and integrate into Australia.”

While there are incidences where additional assistance with settlement is needed especially for people who are coming as humanitarian refugees and are seeking support with language development and education, however the majority of African immigrants are on skilled visas, are citizens and are often employed in professional positions. A/Professor Wickes said this was evident at the forum where many of the African participants were successful in their professional lives. 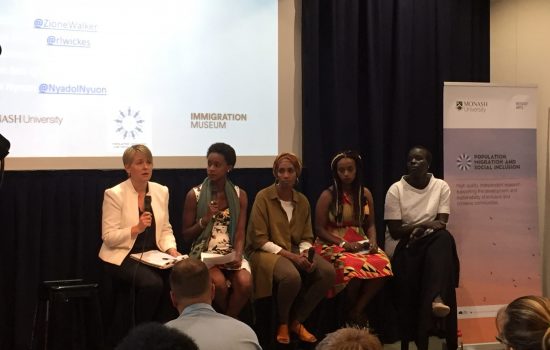 “The stereotype that we’re being overrun by African youths who are terrorising our neighbourhoods is blatantly false. There is no evidence to support that claim,” A/Professor Wickes said.

Throughout the panel discussions a number of ways these issues can be managed were identified including a lack of ethnic diversity in newsrooms and the need for responsible and ethical media reporting.

Analysts have said media discourse surrounding the African community is frequently racialized and sensationalized often for short-term political gain. Examples include post-Moomba headlines such as, ‘African youth gang violence ruins Melbourne's Moomba Festival for a third year in a row …’.

Also identified was the need to adjust the perceptions of media audiences by taking into consideration biases that might be occurring in schools and workplaces, governments and policy. “There is a broader need to deal with prevalent structural issues by having a more inclusive and diverse workplace and ensuring easier transitions for those who have migrated from different countries to find a decent job in Australia,” A/Professor Wickes said.

A/Professor Gamlen also said that the “so-called African Gangs” panic is part of a wider global trend of re-evaluating migration and other forms of globalization, expressed in the rise of Donald Trump, in Brexit, in the rise of populism across Europe, and in the global spread of authoritarianism.

“These are all part of the background to why some media think it is safe to write stories that are verging on racism. There is a rise globally of anti-immigrant sentiment, and we are experiencing a local manifestation of that,” he said.

Often ignored or unknown is the reality that there is no such thing as an ‘African Community’, rather people have migrated from a range of countries across the African continent with an incredible range of languages, ethnicities and religions.

“When they come to Australia they’re somehow glued together in this ‘African community’ box, and that mobilizes a certain kind of identity,” A/Professor Gamlen said.

“We need to think carefully about what kind of identity we mobilise. As the Victoria Police highlighted, when you refer to ordinary people as ‘gang members’, many will be rightly upset, and a few may even start to think of themselves that way. Either way, it’s hard to see how that would help.”

Founders of the #AfricanGangs social media movement Maker Mayek and Natalina Andrew said there is an immediate need for the mainstream to understand African-Australians beyond political statements and media sensationalism.

“African-Australians are some hard-working and law-abiding members of our community. It is acknowledged that some young people who are struggling to cope with day-to-day challenges are causing concerns in the community.

They say the narrative should not be a “broad-brush” and such a forum creates the space to change the narrative.

‘#AfricanGangs: Beyond politics and media headlines’ is the first step towards a commitment to wider engagement with the community and stakeholder networks from the Monash PMSI Focus Program.  Moving forward, the Focus Program seeks to build upon the outcomes and discussions presented at the forum as an opportunity for action that benefits and includes the wider community by reaching out to attendees, and consulting with industry as well as community to find solutions and identify knowledge gaps.

“We would like to work with members of the community and with industry to develop sound policies that are evidence based that can be evaluated to drive change in the direction where diversity is seen as a strength,” A/Professor Wickes said.

“Members of the African community are great citizens and contributors to this country and to be able to work with them in ways to move this forward is really quite a privilege.”