The Music Archive of Monash University (MAMU) in the Sir Zelman Cowen School of Music and Performance has received a new set of Indonesian musical instruments, believed to be the first in the world outside Indonesia, bought from Professor Margaret Kartomi's latest ARC Discovery grant.

The talo balak (literally ‘great gong’) ensemble – comprising a set of bronze and wooden instruments – were hand-crafted specifically for MAMU by local instrument makers in Indonesia known to Mitchell Mollison, who recently submitted his Masters thesis on Lampung music.

Unusually in the Indonesian context, the set comprises two pairs of plate cymbals, an upright laced drum and a flat bronze gong as well as the great gongs with bosses (a protrusion) in the middle which enrich the sound when beaten. 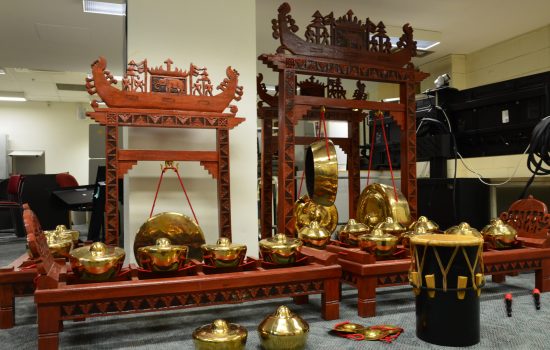 This hand-crafted Talo Balak is believed to be the first outside of Indonesia. 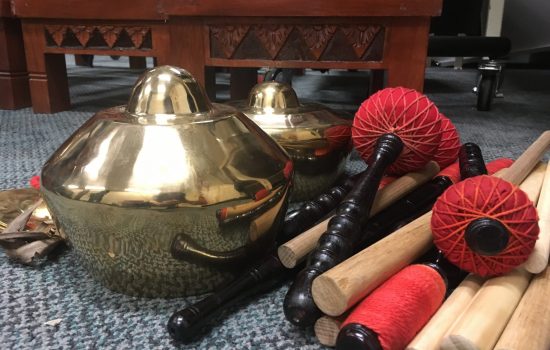 The exquisitely carved wooden stands depict local elephants in the forests, 2,000-year old Dong-son designs found on megalithic stones to Lampung's north, as well as the siger headdress worn by women at traditional ceremonies at which the instruments are played.

Traditionally, the talo balak ensemble is played at ceremonies and events relating to the life cycle.

The talo balak ensemble has its roots in Lampung the southernmost province of Sumatra.

“Lampung has a particular diversity of instrumental music, partly as a result of its ethnic diversity and partly because of the many influences it has received over the millennia,” Professor Kartomi said.

Professor Kartomi said the music of Sumatra has remained poorly known because the partly mountainous province has remained largely closed to outside researchers due to lack of roads and other communications until relatively recently.

“Even now large areas are difficult to access,” she said.

“All the provinces are rich in music, and students and staff have been recording and researching their music, dance and theatre for many years.”

Sample the sounds of the talo balak ensemble, or make a time to tour the extensive MAMU collection.