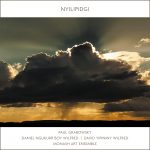 The winners of the Australian Music Centre‘s 2016 Art Music Awards were announced tonight in a ceremony at Melbourne's Plaza Ballroom. Staff and students from Monash University were among the awardees.

Director of the Monash Academy of Performing Arts, Professor Paul Grabowsky in collaboration with Daniel and David Wilfred of the Young Wägilak Group of East Arnhem Land won ‘Jazz Work of the Year’ for Nyilipidgi. The work was performed by the award-winning School of Music ensemble, the Monash Art Ensemble (MAE).

Nyilipidgi was released by the MAE in July through ABC records. As Indigenous music scholar Samuel Curkpatrick notes, ‘this album thrives on the unique voices of individuals brought together to play, create and imagine. As a part of the manikay tradition, it is an invitation to sit and listen to the voices of those who are beside us, who wish to share and relate their own lives in song. Nyilipidgi is an artwork of possibility, a breath of fresh air that might just sweep us somewhere we could never anticipate. We do not know to where the wind blows’.

Chair of Composition at the Sir Zelman Cowen School of Music, Professor Mary Finsterer was also nominated for ‘Orchestral Work of the Year’ for her symphonic composition Darkest Light, as performed and premiered by the School of Music ensemble, the Monash Academy Orchestra. Although Professor Finsterer did not take out the award, she was honoured to be recognised. Finsterer states ‘I am incredibly warmed to be amongst one of the four chosen for this highly prestigious award. Writing for orchestra is one of the most demanding fields, so it is an enormous honour to be considered in this category. It is all about participating. No matter where you are in your journey, you have to take risks and put yourself out there. I am part of a wonderful music community that offers opportunities to take these risks!'.

The prestigious awards are presented in 11 categories, from large-scale symphonic pieces to instrumental works and experimental projects, and reflect the diverse, high-quality and flourishing Australian music industry. The categories recognise works composed and performed in 2015.

After the announcement of the 2016 nominees, Australian Music Centre CEO, John Davis commented that the artists ‘represent our champions, and those who champion our champions. The names of those established and emerging, in cities and in regional areas, show that we have much to celebrate in the Australian art music sector’. 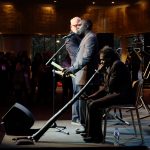 Monash University would like to congratulate all finalists and winners of the 2016 Art Music Awards. For more information, and to see a full list of nominees please visit the Australian Music Centre website.

Nyilipidgi will be performed at the Wangaratta Jazz Festival at 8pm on October 28, 2016.

You can also catch Paul Grabowsky with the Monash Art Ensemble on Friday October 14 at 8pm at the Sir Zelman Cowen School of Music at Monash University. They will be performing new works by Robert Burke and Marc Hannaford, as well as recent works by Eugene Ball and Joe O'Connor.