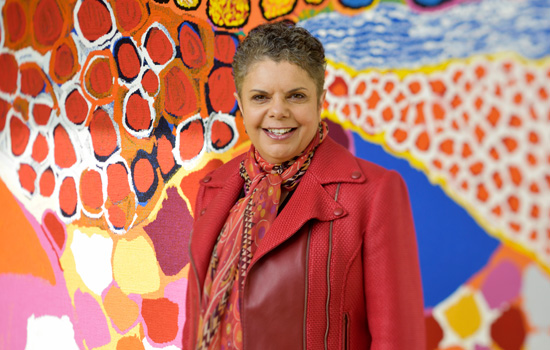 The Sir Zelman Cowen School of Music at Monash University is delighted to welcome soprano, composer and educator Deborah Cheetham AO as Professor of Practice. The announcement comes hot on the heels of Professor Cheetham’s victory at the Melbourne Awards, where she accepted the prestigious Melbourne Prize for Music.

‘Professor Cheetham has been a leader and pioneer in the arts landscape for over 20 years,’ said Professor Sharon Pickering, Dean of Monash Arts. ‘Her exceptional commitment to using the arts as a force for change has inspired generations of performing artists, musicians, students, academics and communities, and we are thrilled she is bringing her wealth of knowledge and experience to the faculty.’

‘We are proud to welcome Professor Cheetham to the Sir Zelman Cowen School of Music,’ said Professor Cat Hope, Head of School. ‘We look forward to working with her as she continues to enrich our understanding of Australia while contributing to the music program at Monash University.’

Committed to the fearless practice of the arts, Professor Cheetham describes herself as a ‘21st century urban woman who is Yorta Yorta by birth, stolen generation by policy, soprano by diligence, composer by necessity and lesbian by practice.’

In 2014, Professor Cheetham was appointed an Officer of the Order of Australia (AO), for her ‘distinguished service to the performing arts as an opera singer, composer and artistic director, to the development of Indigenous artists, and to innovation in performance’. In 2015, she was inducted onto the Honour Roll of Women in Victoria, and three years later she received an Honorary Doctorate from the University of South Australia for her pioneering work and achievements in the music.

Professor Cheetham’s Eumeralla, a war requiem for peace, premiered to sold out audiences on-country at the Port Fairy Spring Festival in 2018 and at Hamer Hall in Melbourne with the Melbourne Symphony Orchestra in 2019.

In addition to winning the Melbourne Prize for Music, in 2019 Professor Cheetham has established the ‘One Day in January’ project, designed to develop and nurture Indigenous orchestral musicians, and received the Sir Bernard Heinze Memorial Award for service to music in Australia and the Merlyn Myer Prize for Composition. She was also inducted onto the Victorian Aboriginal Honour Roll.

In addition to her position as Professor of Practice at the Sir Zelman Cowen School of Music, Professor Cheetham has been named the 2020 Composer in Residence for the Melbourne Symphony Orchestra.