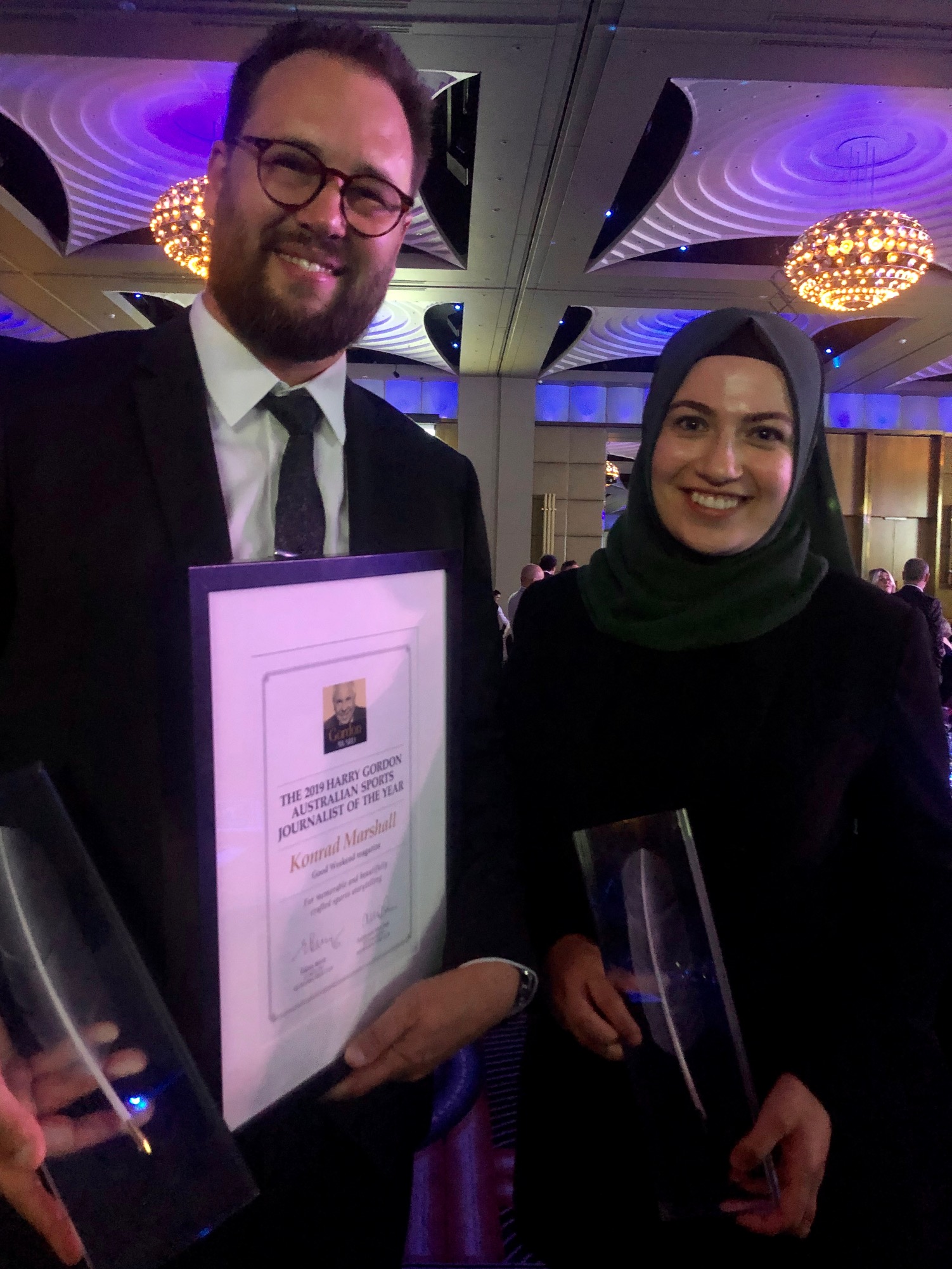 The Age journalists Konrad Marshall and Sumeyya Ilanbey at the 2019 Quill Awards.

Master of Communications and Media alumnus Konrad Marshall, who writes for the Good Weekend magazine, was awarded the 2019 Harry Gordon Australian Sports Journalist of the Year for an outstanding portfolio of feature articles.

Mr Marshall, who graduated from Monash’s media program in 2002, also won the Sports Feature category for Brain Storm about sports concussion, published in the Good Weekend for The Age and Sydney Morning Herald.

“It’s hard to fathom. I’ve followed sports all my life, and never thought I would have the opportunity to speak at length to the likes of Rod Laver and Gillon McLachlan and Ellyse Perry,” Mr Marshall said

“I’m in a privileged position, which I never take for granted, in humanising Australia sport.

“I was taken aback when my piece about concussion in the AFL won the Quill Award for best sports feature. That was a six-month investigation for me, and yielded the knowledge that concussion is not only a serious and controversial issue - but a highly vexed and disputed one.”

Monash journalism alumnus Chris Gillett was part of the ABC 7.30 team to win the Quill for TV/Video Feature (Long Form) for Nicola Gobbo breaks her silence, one of 2019’s biggest TV moments.

The Age journalist Sumeyya Ilanbey, who studied in the Master of Journalism program, combined with colleagues Chris Vedelago and Cameron Houston to win the Quill for the 2019 Coverage of an Issue or Event for their investigation into toxic waste in Melbourne.

“It’s an absolute honour to win this award, and I’d like to pay my respect of my colleague Chris Vedelago – a real powerhouse and an asset to journalism,” Ms Illanbey said.

Another four Monash journalism graduates scored high commendations in the Quills, including Nine News journalist Gillian Lantouris, who was part of the team to cover the arrest of Jonathan Dick (Breaking News Coverage), The Age’s Craig Butt and Nicole Precel for contributing to The Invisible Crime series (Innovation in Journalism) and News Corp journalist Suzan Delibasic for her report, Petition saves Hero the staffy from Cardinia Council taking action against him (Suburban Journalism).

Ms Delibasic said the Quill's award-winning stories captured the hearts and minds of people across the country.

“I thank the Melbourne Press Club for recognising my work and huge congratulations to all finalists,” she said.

Monash’s Head of Journalism Associate Professor Fay Anderson said she was delighted to see Monash alumni's continued success and recognition at the Quills.

“In an era when the industry is under threat and journalists are regularly targeted and intimidated, the Quills are a reminder of the vital role of rigorous, courageous and illuminating journalism,” Associate Professor Anderson said.

“The journalism section and the School of Media, Film and Journalism are immensely proud of our graduates who won, received commendations and were nominated.”

Professor Brett Hutchins, Head of the School of Media, Film and Journalism, said the awards were testament to the hard work and quality of our students, as well as the journalism program as a whole.

“We are proud that our graduates are producing journalism that is compelling, entertaining and never shies away from hard truths. I commend all the award winners and nominees,” he said.