Area A is primarily a residential zone and is delineated by a series of many streets and lanes. One major east-west orientated street appears to feature centrally within this area and may connect up with the eastern gateway of the Temple enclosure.

The main localities of investigation include the group of Houses 1, 2 and 3, House 4, House 5, a bath house and the Small and Large East Churches. Most recently, a probable Nymphaeum has been revealed in the northern sector of the area.

Houses 1, 2 and 3 exhibit a combination of architectural features typical of domestic structures encountered in this sector of Area A. Each of the houses is entered from the south. A fourth structure, the North Building, abuts Houses 1 and 2; it may originally have served a domestic function, but was later used as ... Read more 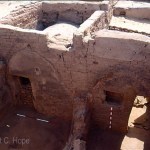 House 4 is located due east of the main entrance into the outer enclosure of the Temple of Tutu. The structure was excavated after the completion of work on Houses 1-3 in the hope to discover and study domestic units of an earlier period. It is built in mud-brick and contains at least 20 rooms. ... Read more

House 5 is located approximately 25m northeast of the East Church Complex. Excavation was undertaken in an attempt to further clarify the apparent 4th-century residential development of the central zone. As work on the other houses indicated that some of their occupants were Manichaean, it was also deemed important to ascertain whether or not the ... Read more 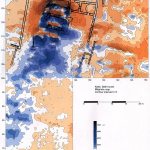 Little is known about the full extent of this structure as only preliminary work has been undertaken on the remains. The buiding is almost completely buried by sand and its presence is denoted mainly by traces of walls and fragments of baked mud-bricks. At the north of the complex is a colonnaded loggia (18m x ... Read more

Large East Church This mud-brick structure was first examined during preliminary surveys of Dakhleh Oasis. The identification of it as a church was possible due to the presence of certain features, namely an apse and nave. Initial test excavations unearthed ceramics and coins which provided the first indication that the church may date to the mid-4th ... Read more

This structure, designated as A/11, is located about 25m southeast of North Tomb 1 and around 200m west of the 4th century houses (Houses 1-3). It comprises a colonnaded room with associated structures to the east and west, and a garden to the north. A well was dug in antiquity immediately to the southwest of ... Read more