Little is known about the full extent of this structure as only preliminary work has been undertaken on the remains. The buiding is almost completely buried by sand and its presence is denoted mainly by traces of walls and fragments of baked mud-bricks. At the north of the complex is a colonnaded loggia (18m x 4-5m) which is connected to a domed and lime-plastered antechamber.

Through the antechamber, access is provided to a rectangular mud-brick enclosure (20m x 30m); its east wall is lime-plastered and bears decorative vaulted and half-vaulted niches. The central space of this enclosure is occupied by a multi-roomed structure built of lime- and ash-cemented baked brick. It was domed and the end rooms contained semi-circular niches. Vertical flues of ceremic pipe were found built into the walls, which is a common distinguishing feature of bath houses throughout the Roman world.

Recently, magnotometry surveying has created detailed sub-surface imagery that reveals further probable wall alignments and rooms associated with the bath complex. The results are quite impressive and will surely aid any future excavation in relation to the Bath House. 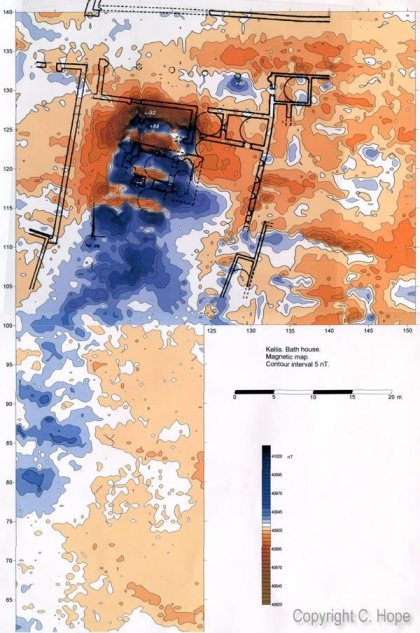 A magnetometry image with a structural plan overlay An interpretational map of the magnetometry image