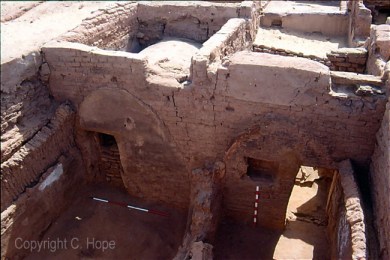 A view of two northern rooms in House 4, looking south.

House 4 is located due east of the main entrance into the outer enclosure of the Temple of Tutu. The structure was excavated after the completion of work on Houses 1-3 in the hope to discover and study domestic units of an earlier period. It is built in mud-brick and contains at least 20 rooms. Staircases are apparent also, which provided access to an upper storey. The majority of the rooms were barrel-vaulted, but at least one central room had a flat room supported by large beams. Some common aspects of the rooms were niches, shelves and distinctive plastering around important features. These architectural aspects in particular resemble those also found in Houses 1-3.

As with the other houses excavated in Area A, the excavations in House 4 yielded an abundance of artefacts. These included ceramics, basketry, faience, fine glassware, textiles, figurines and household items. Amongst the ceramics are important painted pieces as well as an imitation of imported North African table-ware. Certain pieces of the faience which were found also belong to a date range of the 1st to early 2nd centuries CE. Perhaps most importantly though, 41 fragments of inscribed wooden boards, approximately 600 pieces of Greek papyri, 14 ostraka and 123 coins were found in well-stratified deposits. Some of the documents attest Manichaeans.

One document provided a date of 368 CE, whilst approximately 1/6th of the coins cleaned and identified provided predominantly 4th-century CE dates. All indications from the excavation of this house and its objects tend to suggest that its occupation occurred during the 3rd and 4th centuries CE. Nonetheless, some of the ceramic material found in sub-floor deposits indicated a 2nd to 3rd century CE date, which may also suggest earlier activity in this particular locality.