This structure, designated as A/11, is located about 25m southeast of North Tomb 1 and around 200m west of the 4th century houses (Houses 1-3). It comprises a colonnaded room with associated structures to the east and west, and a garden to the north. A well was dug in antiquity immediately to the southwest of the colonnaded room and the debris from this covered most of the south wall and a substantial area in the southwest.

The colonnaded room is oriented north-south; the internal dimensions are 9m east-west and 6.8m north-south. The two north-south colonnades each comprise a triple column on the north, three single columns, each placed one metre apart, and one column and a half-column projecting 15cm into the room from the south wall. It would appear that the north colonnade originally functioned as the façade of the building and the central section may have been open. The principal northern access to the colonnaded room is via two doorways located to the west and the east of the triple columns respectively; these opened directly into the aisles. The internal walls and columns were coated with a layer of gypsum plaster, as was the facade; yet there is no evidence of painted decoration.

The central section of the room is divided roughly into two sections, north and south. A baked-brick, almost-circular basin was constructed in the south of the room and extended to within a foot of the north-south colonnades. The diameter of the basin east-west was 3.7m. The bricks had been removed in antiquity but their outline, and that of the plaster coating used to waterproof them, was visible. Some baked bricks from the floor remained in situ in the north-western section of the basin. The basin had been constructed on clean sand that extended for a depth of around 1.1m above the basal clay. It was designed to hold water which flowed into it from two water channels situated at its north end. Two baked-brick walls, or aqueducts, each three courses high occupy much of the north section of the room. They run diagonally from the base of the columns in the north colonnade, and were designed to meet at the entrance to the basin. Water was fed into the basin from ceramic channels, placed on top of the diagonal baked brick walls, commencing at the north face of the north foundation wall.

A second room is located to the northwest of the colonnaded room and appears to have been part of the original construction. The extensive ceramic deposit upon which the baked-brick foundation wall of the north colonnade was built indicates that the structure was constructed in the late 3rd or early 4th century. The finds were few but included seven 4th century coins. Only one could be positively identified: it dates to the reign of Constans, and was struck around 350. Nine ostraka or jar dockets written in Greek and possibly Coptic, and two copper loops were also found. At some point during the 4th century modifications were made to the northern section of the colonnaded room and evidence was found to suggest that squatters had occupied the aisles.

The function of this building is unclear. The central section in its entirety is given over the water feature. The diagonal design of the water channels would inhibit activity in the north part of room and the southern section is occupied almost entirely by the basin. This focus upon the water feature, together with its classical façade, indicates a ritual function. The structure is within a classical tradition similar to B/3/1, and resembles Nymphaea(shrines to the Nymphs) that were erected into the 2nd century in other parts of the Roman world; hence, the labelling of the structure as such. 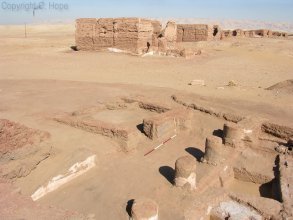 Detail of one of the water conduits at the northern end of the pool.

Nymphaeum pool with remains of baked brick flooring and plaster emerging during excavation.

Detail of remaining baked bricks in situ, comprising the floor of the pool.

Detail of one of the water conduits at the northern end of the pool, showing water-effected mud spill. Nymphaeum post-excavation, showing the supports for the two water channels for the pool.