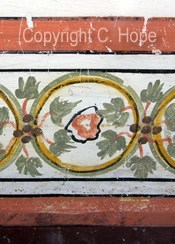 Area B occupies a large portion of the northern sector of the site. It is located to the north of Area A and east of the North Tomb Group and is defined by three, or possibly more, large complexes. These cover an area of approximately 240m north/south and 100m east/west and are separated by intervening laneways.

Structure 1 is somewhat puzzling as to its original function. One possibility is that it served as an administrative facility, which contained a number of rooms in excess of 200, courts and corridors, and was at least two storeys.

Recent work has targeted the northernmost complex where richly decorated rooms belonging to a residence have been uncovered and a columbarium (dovecote or pigeon loft) has been investigated.

This large structure lies very close to Area A and contains in excess of 216 rooms, several of which bear traces of painted wall plaster. Excavation of a 4m x 4m test trench was undertaken in the southwest corner of the large room (Room 1) at the southern end of the structure (B/1/1). The investigation ... Read more

B/3/1 is one among a number of other large residential complexes situated in the northern part of Kellis. In plan, the structure resembles that of a Roman atrium house. The first stages of excavation of this complex took place from 2005 to 2007. All of the rooms belonging to the structure appear to be decorated ... Read more

The structure B/3/2 is located a short distance from the Painted Residence (B/3/1), at the north-west corner of an open court that links these two structures with others on the west. To the southwest of B/3/2 (due west of B/3/1) is yet another structure similar in plan to B/3/2. The overall dimensions of the four-roomed ... Read more

Detailed Map of Area B, Kellis