B/3/1 is one among a number of other large residential complexes situated in the northern part of Kellis. In plan, the structure resembles that of a Roman atrium house. The first stages of excavation of this complex took place from 2005 to 2007. All of the rooms belonging to the structure appear to be decorated with varying designs and motifs executed in polychrome. A large central and open area (Room 1) was delineated by preliminary clearance and was found to have four large circular columns and two large square piers. Although treated as one space, it is actually two contiguous, yet distinct halls. The flooring of these areas was constructed with white gypsum laid onto a thin layer of coarse-grained sand and below this, brick platforms and mortar rubble.

This central space is flanked on the east and west by smaller rooms and by corridors on the north and south, though neither of the latter appears to communicate with the two halls. The central hall appears to have been entered originally from the northwest via a single room. There is, however, a long passageway located along the east and north of the hall which may have also served as an entrance. The precise layout is still undetermined and is complicated by various modifications made to the structure.

Many of the modifications were drastic and altered the internal arrangement significantly. Evidence of stabling activity was also noted in many of the deposits encountered during excavations. Minimal amounts of 4th century ceramics are associated with the excavated units, although late 1st to early 3rd ceramics form the majority of material found and are predominant, especially in the floor deposits. Trenches C and D produced important sub-floor deposits containing ceramics which indicate that the first phases of construction took place within a period covering the late 1st into the 2nd century.

A plan of the painted residence in 2007.

Room 1 was filled with a substantial amount of debris and collapse. In the southern area the walls are decorated with panels on an overall green ground, the lower two of which remain mostly in situ: a dado of painted rectangles in which are floral sprays from the centre to each corner, and above this in a high panel, an intersecting circular pattern in black outline, of which the ellipses are filled with white dots thus converting the motif into on resembling attached four-petal flower, with rose petals between, all framed by a vine motif in white. Much decorated plaster from the ceiling, some containing images of Isis and Serapis-Helios, and plaster fragments with geometric design was also found in this area. In the northern area of the room the wall is decorated with rectangular panels containing figurative elements including a female bust and birds.

Rooms 2 and 3 are decorated with similar painted schemes incorporating circles or squares filled with alternating patterns of a chequerboard motif or a rippling in imitation of agate, all polychrome. Narrow columns with Corinthian capitals feature between these elements, in Room 3 supporting a short frieze of classic wave motif. Room 2 has a sturdy floor of gypsum plaster set upon stones overlaying brick rubble. Its wall design comprises alternately a yellow or pink square with black framing lines within a diamond within a large square. On the north wall the scheme is interrupted by a different design based upon intersecting circles with sections coloured pale blue and pink. Room 3 has a similar floor structure and its wall decoration is based upon circles on an alternately yellow or pink ground, within which are diamonds with scalloped sides; a lower dado contains octagons coloured alternately red with a yellow central square or yellow with a red square, on a black background.

Rooms 4 and 6 are decorated in a contrasting manner to Rooms 2 and 3. Both feature a panel design. In Room 6 the upper part of the wall was exposed to reveal a series of monochrome lines that form a square on a uniform green background below a modelled torus moulding. In Room 4 the west and south walls were exposed and revealed alternately red panels containing smaller central yellow squares of yellow panels with red squares; they are separated by double columns with Corinthian capitals, and above a modelled ledge, the wall is white. Substantial quantities of collapsed decorated plaster were found at surface level in these rooms and due to their great thickness probably derived from painted floors in upper levels.

A small portion of Room 7 was cleared and found to contain well-preserved wall plaster on all four walls. The gypsum plaster was painted with a decoration comprising a foliate scroll above rectangular or square panels and areas with various flora, executed in light colours on a dark background. Rooms 9 and 10 (originally one room) are also decorated in a restrained manner: Room 9 in pink with an ashlar masonry design and Room 10 with a monochrome green. Room 9 was found to contain many fragments of sculptural and architectural stucco and plaster work. An oval clay tablet inscribed with Greek was found in Room 10 and contains a list of several names.

Plan of the painted residence in 2010.

Excavation of B/3/1 resumed in 2010. The northwest corner area of Room 1 was cleared and Trench E, located to the west of Trench D in 1b, was excavated. Clearance and excavation within Rooms 5-8, 11-13 and 18-20 also took place. The excavations exposed major parts of the main living areas, private rooms and parts of two of the entrance systems. Decoration of the rooms is consistent with the rest of the structure that has been investigated thus far. Most are elaborately painted with classical themes and the architectural details are also classical.

This suggests that the owners of the residence, though possibly Egyptian, wished to emphasize their adoption of contemporary styles prevalent throughout the Mediteranean as well as their conformity to classical ideals. Further information about the layout and elements of the complex were dicovered: the main entrance terminated at a recess with panel design, a shell motif and probably once housed a statue. Three doors connected the living area with a side chamber that were closed by folding wooden doors with latticework; other rooms have small faces depicted in the middle of elaborately-coloured panels. Surprisingly much of this was preserved under the collapse of the roofs, which themselves were well preserved. Unexpectedly, the intact burial of an adult, lop-eared Nubian she-goat was discovered below the floor in front of a doorway in the service apartments of the structure. It has all of the appearance of a sacrifice – though it has not yet been determined how the animal died – possibly to ensure the protection of the residents. 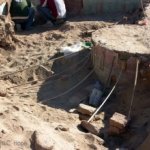 Consolidation of column plaster during excavation. 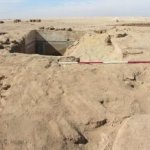 A general view of the surface area covering the painted residence and showing Room 4, looking west. 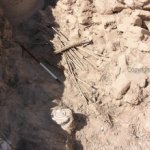 View of debris encountered in the trenches of Room 1. 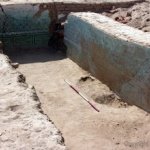 Trench A looking south across Room 1a. Fragmentary decorated wall plaster from Room 1 with a geometric design. 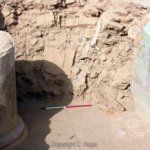 Detail view of collapse in Trench B at the west end and remaining wall plaster. 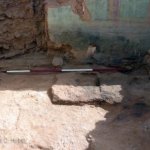 Trench B, detail of floor at east end.

Trench B, west end of north wall, looking north. A female head, a cockerel and a pigeon are each depicted in one of the panels. Trench B, looking northeast across Room 1b.

Detail of one of the columns in 1b. 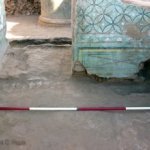 Trench A looking north from Room 1a into 1b.

Commencement of excavation in Trench D.

Detail of wall plaster found near the floor in Room 1. 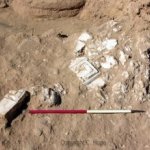 Ceiling plaster encountered in the rubble fill of Trench D.

Remains of ceiling plaster found amongst the debris filling the room. 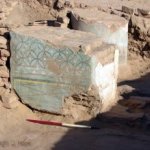 View of the decorated pier between Room 1a and 1b. 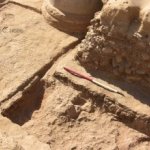 Detail of Trench D floor and sub-floor at south end. 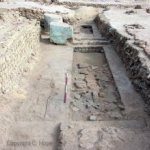 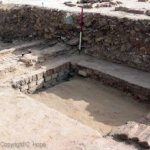 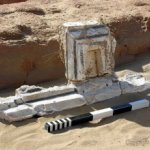 Room 9 after partial clearance of the vault collapse.

Room 6, upper part of wall decorated with panels and the remains of a cornice.

View of northwest corner of Room 3 after partial clearance.

Detail of classical theme in Room 4.

Detail of bottom frame of decorated wall plaster in Room 3.

Reconstructed plaster with sandled feet of a small statue from Room 10.

Upper portions of wall in Room 7 decorated with a viticulture theme.

Architectural fragment in stucco from Trench B, 1b.

Oval clay tablet from Room 10 incised with Greek containing a list of names.

Stucco sculptural fragment from Trench A, 1a.

Architectural fragment in stucco from Trench B, 1b.

Exposure of the geometric design in Room 6, showing also scattered ceiling plaster in the fill.

Debris and fill in the northwest corner area of Room 1, prior to the excavation of Trench E.

View of the decorated arch which is associated with the recess at the west end of Room 11.

View of the collapsed roofing material found in situ within Room 6.

Depiction of a cockerel within a painted wall panel in the northwest corner area of Room 1.

Detail view of a section of upper wall decoration which has a Greek inscription.

Detail of the northwest corner of Room 1, showing the wooden framing and part of the recess at the west end of Room 11.

Detail of the collapsed roofing material in the fill of Room 6, showing bound gereed (palm fronds) and impressions of gereed in mud plaster.

Detail view of a decorated wall panel with the head of a boy depicted within the central inset, showing also collapsed roof material.

View of the recess at the west end of Room 11, which is decorated with panels.

Depiction of a female within a painted wall panel in the northwest corner area of Room 1.

General view into Room 7 from above, showing the state of preserved wall and decoration and roofing collapse in situ.

Detail view of one of the panel designs with a bearded male depicted in the central pane.

View of the south wall and doorway of Room 7, showing the varying, decorative panel design.

General view of the northwest corner area of Room 1 after excavation, looking into Room 11.

View of a panel on the north wall of Room 11, showing part of the recess, which may have been domed.

Detail view of female head which is depicted in the central pane of a wall panel.

Detail view of the decorative scheme of one of the wall panels, showing roof collapse in the foreground.

View of the collapsed roof in Room 7 as found during excavation.

Detail view of the bearded male set within the central pane of a wall panel.

Detail view of another female head set within the central pane of a wall panel.

The intact burial of an adult, lop-eared Nubian she-goat (possibly sacrificed) below the floor in front of a doorway in the service apartments of the residence.