This large structure lies very close to Area A and contains in excess of 216 rooms, several of which bear traces of painted wall plaster. Excavation of a 4m x 4m test trench was undertaken in the southwest corner of the large room (Room 1) at the southern end of the structure (B/1/1). The investigation of this area revealed this room to be a lofty colonnaded court, at least 8m in height, with elaborately decorated walls and ceiling. The columns were found to be quite elaborate.

They are constructed of fired mud-brick, were painted and stand upon modelled pedestals, and were also provided with Corinthian capitals crafted of plaster. Support for the columns is provided by a series of walls up to 1.2m wide and set into the bedrock. One of the walls was cut through a series of slightly earlier vaulted chambers. Importantly, the fill of these chambers contained many ostraka and mud jar sealings. On the basis of a palaeographic study, these documents indicate a period of use spanning the 2nd to late 4th centuries CE; a date also supported by the ceramics encountered.

A plan of Structure 1.

During excavations, there were numerous indications as well as a body of evidence to suggest that the court witnessed several phases of reuse. The predominant of these secondary phases was its use as a stable for donkeys, goats or sheep and camels. From the layers above the stable deposit, the ceramics appear to indicate a mid-4th century CE date. A similar-dated inscribed wooden board found in collapse above the last occupation phase also helped to establish that the 4th century activity in this structure was contemporary with the occupation of structures in Area A.

Another and larger area (B/1/2) was opened up at the northern end of the same colonnaded hall in an effort to gain a firmer idea of the use of this important building. Extensive areas of wall collapse, some with sections of decorated plaster still adhered, were revealed and it was necessary to concentrate excavation in the northwest corner where the walls were better preserved. Work in this corner established that painted plaster survives upon the walls and elaborate herringbone coursing features in the brickwork. One of the decorative motifs included a painting of a female bust within a panel. In nearby rooms, clearance of the upper fill deposits revealed numerous black-ink drawings on the upper sections of walls. They include: a prostrate figure, presumably male, lying in an erotic posture upon a couch, a soldier with shield, several figures on horseback and a wheeled contraption. Additionally, several lines of Greek inscription were noted. Drawings at a similar height were also discovered in the southwest corner of Room 1 as well as a Greek inscription mentioning several persons with the name “Aurelius”, which indicates that it was written in the 3rd or 4th century.

The investigators also decided to undertake excavation of an area (B/1/3) in the western part of Structure 1. A series of connected rooms containing niches features in this place and as a number of texts refer to storage of documents within niches, it was hoped that further written material would be found here, possibly the village archives. Unfortunately, nothing survived in the excavated area to confirm the supposed function of the rooms. Amongst the ceramics found at the floor levels there were sherds of 1st-2nd century CE date, but above this mostly stable matter occured with associated ceramics of the late 3rd and 4th centuries CE. 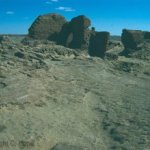 A view of the southeast internal area of Structure 1, showing wall collapse in the foreground. 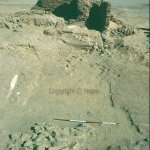 A view across the area of the colonnaded hall in Structure 1, showing the stairwell remains.

A general view of the internal area of Structure 1 showing collapsed walls, looking towards the northwest. 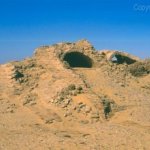 A view of partially ruined vaulted rooms in Structure 1. 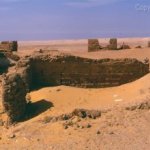 A room in Structure 1 showing a distinctive brick pattern giving the appearance of a herring bone. Some of the northern tombs are visible in the background. 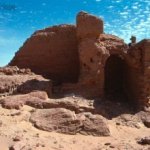 A view of the remains of a stairwell and the collapse surrounding it in Structure 1. 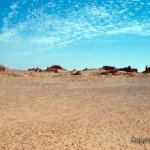 A general view of the western side of Structure 1, looking towards the east. 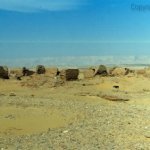 A general view of Structure 1, taken from the southeast. 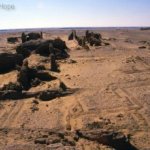 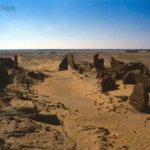 A general view of Structure 1 showing the southern end of the complex, looking south.

Southwest corner of Room 1 after the initial clearance of the surface deposit, showing debris amidst columns, looking south.

The double-column emerging from the debris in the southwest corner of Room 1, also showing fragments of detached decorated plaster.

A view of the debris surrounding the double-column in the southwest corner of Room 1. 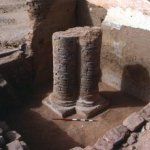 Southwest corner floor area of Room 1, showing the construction phasing in association with the double-column. 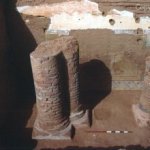 A view of the double-column and another single column exposed during the excavation, looking west (visible on the right, bricking was added in order to retain sand fill during excavation). 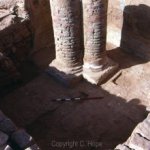 Southwest corner floor area of Room 1, showing the construction phasing in association with the double-column.

A group of mud-jar sealings with dockets still attached.

Detail of one of the mud-jar sealings with its docket attached.

Door implements which comprise part of the typical locking mechanism of a wooden door.

Basketry from the surface area west of Structure 1. 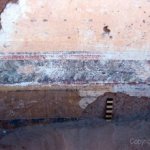 A portion of wall plaster showing the upper frieze decorated with a floral motif. 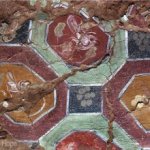 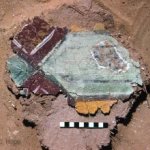 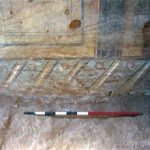 Wall plaster in Room 1, decorated in polychrome, showing the lower sections of panels and the lower frame. 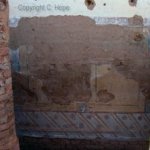 Wall plaster in Room 1, showing the panels and lower frame. Columns are shown between the panels, which were depicted capped by a Corinthian capital (visible on the far right). 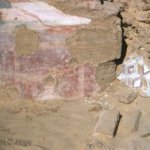 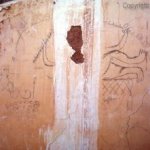 Graffiti on the southern wall of Room 30, showing a soldier and a prostrate male figure lying on his side.

The position of graffiti upon the southern wall of Room 30, shown in relation to a wall niche.